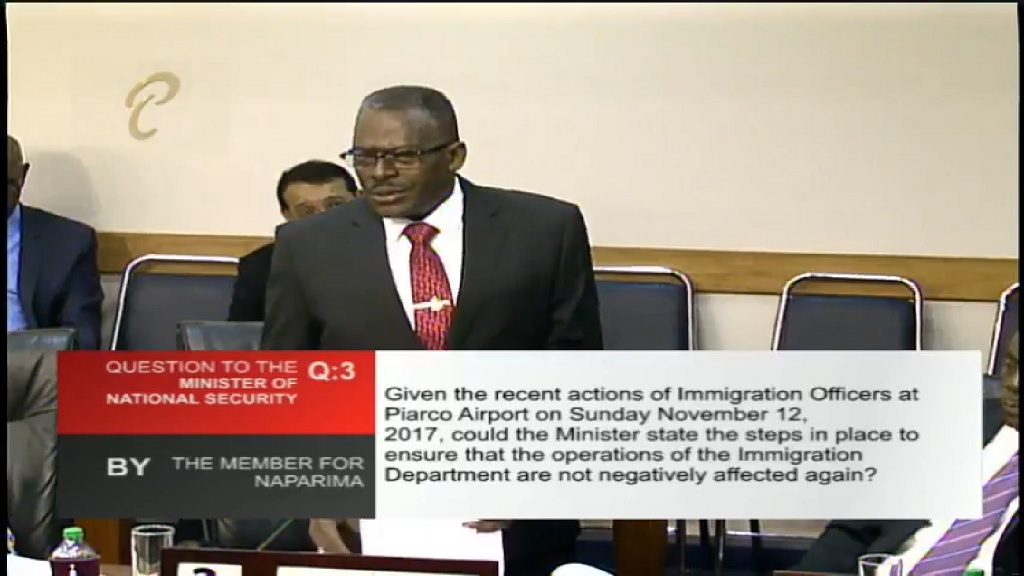 National Security Minister Edmund Dillon said the recent chaos experienced at the Piarco International will not happen again due to extra measures being introduced.

Speaking in Parliament on Friday, Dillon said Government is looking to install self-service kiosks to alleviate congestion during peak periods.

“Negotiations and discussions between the Airports Authority and the Ministry of National Security with respect to the purchase and implementation of kiosks will be in place possibly before Carnival 2018 so that people coming into Trinidad and Tobago would not have to go to an immigration officer per se, but go to the kiosk.”

“With respect to measures being adopted, the Minister of National Security has mandated the Chief Immigration Officer to activate and manage the on-call roster for persons stand-by to treat with a situation, similarly, if it occurs,” he said.

He added that the Ministry is negotiating with a standby of retired immigration officers as a ‘second tier’ to be on call to treat with a similar situation.

He added that ‘another group’, which he did not specify, will be trained from next week, as a third backup to treat with similar situations.

He added that the immigration officers involved will be investigated and may be found liable of gross misconduct.

“This government strongly condemns the action of those immigration officers and I’m sure that those who contravened Section 1:49:1 of the Civil Service Act Chapter 23:01 will be dealt with.”

On November 12 video footage was shared online showing long lines and angry passengers who waited for hours waiting to go be interviewed by immigration officers after only one staff member was on duty.