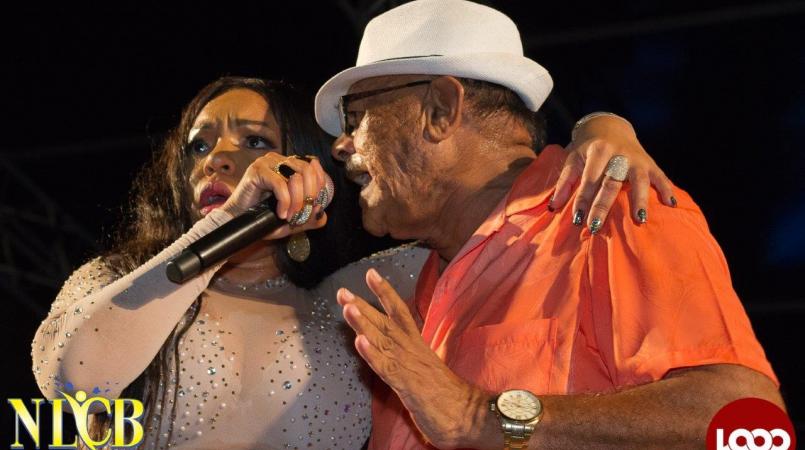 Destra Garcia, in her first All Inclusive performance for the season, started her set with “Closer” an appeal for everyone to hug up those dear to them.

That launched her set which included snippets of her past hits “Fly”, “tremble it”, “Bacchanal”, “Max it up”, “ Bonnie and Clyde” and “Is Carnival” to name a few as well as more recent hits “Destra vs Lucy”, “Lucy”, “Dip and Ride” and “Waistline Killer”.

Stating that she was happy to return to the QRC stage, Destra engaged in light banter with the crowd and danced with an elderly man known for his dancing skills at various fetes before sharing the stage with some friends.

Farmer Nappy joined her on stage for “Technically” much to the delight of the crowd while members of the Pandemic Squad, Swappi and Kerry John, also performed their 2017 hits “Anna” and “Drinking”.

It was certainly brave and smart of the QRC committee to hire Destra and KI and his band who opened the night, as these two acts aren’t mainstays on the fete scene and so provided a refreshing feel for those who would have attended a few All Inclusives before.

Destra set the pace for Kes the Band who is having a tremendous year with songs such as “Incredible” ‘Workout” and Wine Down”, among others.

Kees Dieffenthaller, the lead vocalist, also touched on the crime situation, appealing to men to love and take care of their women.  He was joined on stage by Nailah Blackman and Kernal Roberts during their set.

Roy Cape All Stars also touched on the crime situation as lead vocalist Blaxx reminded the crowd that the woman killed at Movie Towne was his sister in law. Appealing to everyone to come together he sang a special song for his fallen relative.

The night ended on a high with a performance from the Ultimate Rejects and MX Prime who continued to slay patrons with the number one Road March contender “Full Extreme”.

Outside of the music, Fete Royal rolled out the red carpet for patrons, the highlight being a lounge complete with a hairdresser and a barber and lots of champagne.

There was a variety of food on offer but most of it ran out long before the party was over.