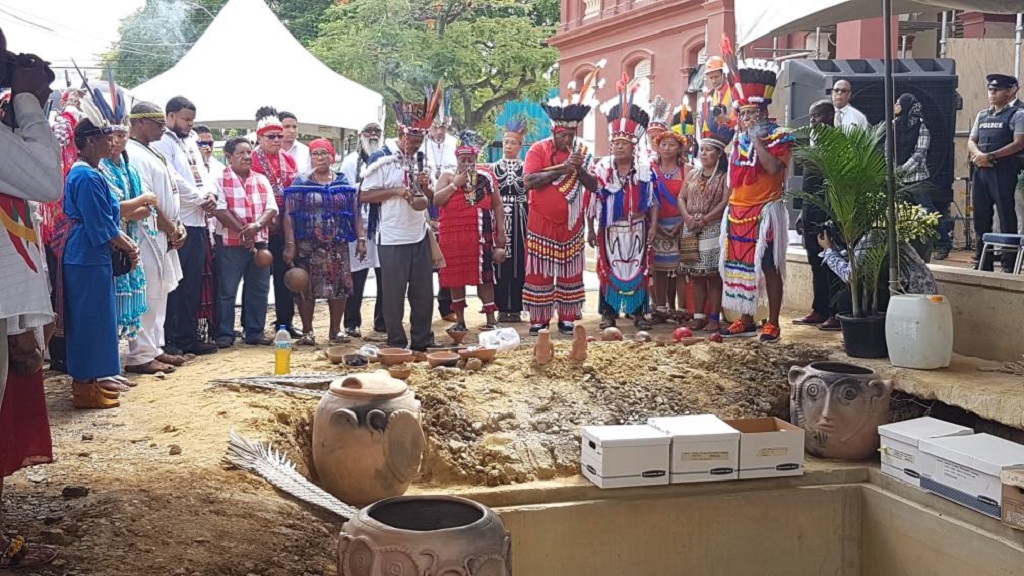 Photos courtesy the Parliament of Trinidad and Tobago.

A momentous ceremony was held at the Red House on Saturday as the remains of the First Peoples, which were found at the site, were re-interred.

The Parliament of Trinidad and Tobago shared photos of the re-interment as members of the First Peoples community carried out a ceremony, calling to the Great Spirits for the remains of their ancestors to rest in peace.

The remains were discovered during rehabilitation works being done at the Red House in 2013, and subsequent DNA analysis of the remains revealed that the bones belonged to First Peoples who inhabited the island during the period AD 990 to AD 1400.

Head of the Santa Rosa First Peoples Comunity, President Ricardo Bharath Hernandez, said the occasion was a momentous one and of significant importance for the First Peoples of Trinidad and Tobago.

Hernandez added that the Association is considering asking that the First People's holiday, which was celebrated as a one-off holiday in October 13, 2017, be made a permanent holiday on October 14.

View the photos below, courtesy the Parliament of Trinidad and Tobago:

Thieves make off with computer, water cooler at Red House