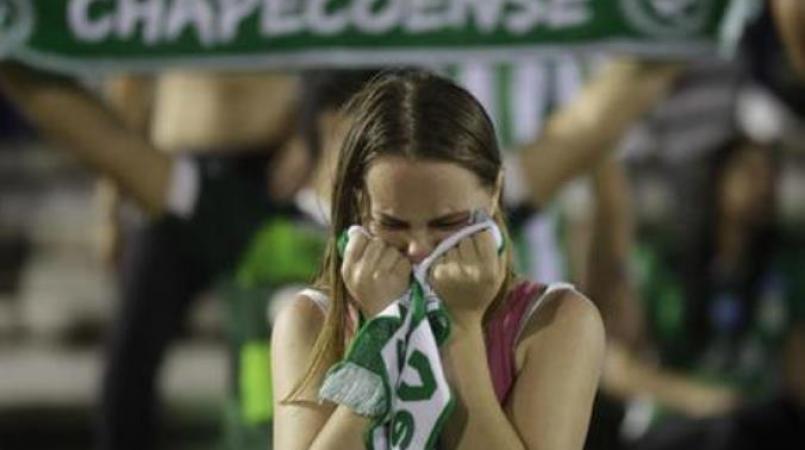 The pilot of the chartered plane carrying a Brazilian football team told air traffic controllers he had run out of fuel.

The pilot desperately pleaded for permission to land before crashing into the Andes, according to a leaked recording of the final minutes of the doomed flight.

In the sometimes chaotic exchange with the air traffic tower, the pilot of the British-built jet could be heard repeatedly requesting authorization to land. "Complete electrical failure, without fuel," he said in the tense final seconds before the plane set off on a four-minute death spiral that ended with it slamming into a mountainside Monday night.

A female controller could be heard giving instructions as the aircraft lost speed and altitude about eight miles from Medellin's international airport. Just before going silent the pilot said he was flying at an altitude of 9,000 feet and made a final plea for a landing code: "Vectors, senorita. Landing vectors."

The recording, obtained Wednesday by Colombian media, appeared to confirm the accounts of a surviving flight attendant and a pilot flying nearby who overheard the frantic exchange. These, along with the lack of an explosion upon impact, point to a rare case of fuel running out as a cause of the crash of the jetliner, which was flying at its maximum range.

For now, authorities are avoiding singling out any one cause of the crash, which killed all but six of the 77 people on board, including members of Brazil's Chapecoense football team traveling to Medellin for the Copa Sudamericana finals — the culmination a fairy tale season that had electrified soccer-crazed Brazil.

A full investigation is expected to take months and will review everything from the 17-year-old aircraft's flight and maintenance history to the voice and instruments data in the black boxes recovered Tuesday at the crash site on a muddy hillside. The U.S. National Transportation Safety Board was taking part in the investigation because the plane's engines were made by an American manufacturer.

As the probe continued, mourning soccer fans in Medellin and the southern Brazilian town of Chapeco, where the team is from, were converging on the two cities' soccer stadiums for simultaneous candlelight vigils. The six survivors were recovering in hospitals, with three in critical but stable condition, while forensic specialists worked to identify the victims so they could be transferred to a waiting cargo plane sent by the Brazilian air force to repatriate the bodies.

Alfredo Bocanegra, head of Colombia's aviation agency, said that while evidence initially pointed to an electrical problem, the possibility the crash was caused by lack of fuel has not been ruled out. Planes need to have enough extra fuel on board to fly at least 30 to 45 minutes to another airport in the case of an emergency, and rarely fly in a straight line because of turbulence or other reasons.

Before being taken offline, the website of LaMia, the Bolivian-based charter company, said the BAE 146 Avro RJ85 jetliner's maximum range was 2,965 kilometers (1,600 nautical miles) — just under the distance between Medellin and Santa Cruz, Bolivia, where the flight originated carrying close to its full passenger capacity.

"If this is confirmed by the investigators it would be a very painful because it stems from negligence," Bocanegra told Caracol Radio on Wednesday when asked whether the plane should not have attempted such a long haul.

One key piece to unlocking the mystery could come from Ximena Sanchez, a Bolivian flight attendant who survived the crash and told rescuers the plane had run out of fuel moments before the crash. Investigators were expected to interview her Wednesday at the clinic near Medellin where she is recovering.

"'We ran out of fuel. The airplane turned off,'" rescuer Arquimedes Mejia quoted Sanchez as saying as he pulled her from the wreckage. "That was the only thing she told me," he told The Associated Press.

Investigators also want to speak to Juan Sebastian Upegui, the co-pilot of an Avianca commercial flight who was in contact with air traffic controllers near Medellin's Jose Maria Cordova airport at the time the chartered plane went down.

In a four-minute recording circulated on social media, Upegui described how he heard the flight's pilot request priority to land because he was out of fuel. Growing ever more desperate, the pilot eventually declared a "total electrical failure," Upegui said, before the plane quickly began to lose speed and altitude.

No traces of fuel have been found at the crash site and the plane did not explode on impact, one of the reasons there were six survivors.

"The airplane was being flight-planned right to its maximum. Right there it says that even if everything goes well they are not going to have a large amount of fuel when they arrive," said Cox. "I don't understand how they could do the flight nonstop with the fuel requirements that the regulations stipulate."

FEATURED IMAGE CAPTION: A fan of Brazil's football team Chapecoense mourns during a gathering inside Arena Conda stadium in Chapeco, Brazil on Tuesday, Nov. 29, 2016. A chartered plane carrying the Brazilian football team Chapecoense to the biggest match of its history crashed into a Colombian hillside and broke into pieces on Tuesday, killing most passengers, Colombian officials said.