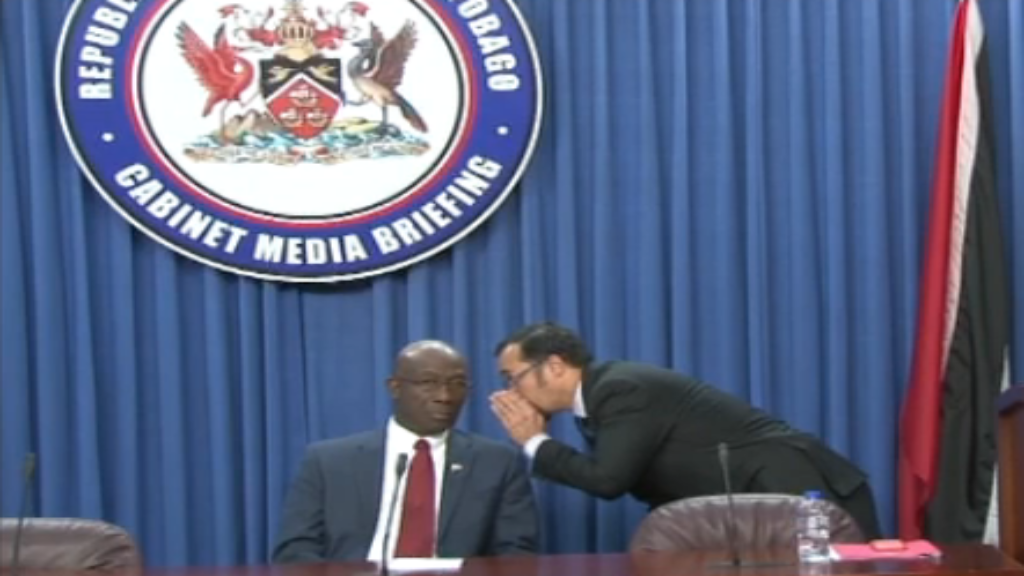 Communications Minister Stuart Young whispers something to Prime Minister Dr Keith Rowley before the start of the Post Cabinet media briefing May 23, 2019.

A new policy which will notify the Attorney General’s office of any requests made for information from Government agencies under the Freedom of Information Act (FOIA) will be implemented shortly.

Through this policy, State agencies will no longer act independently in deciding whether FOIA requests are granted as the AG’s office will advise on the agency on how to proceed.

This, as Prime Minister Dr Keith Rowley said Government has nothing to hide regarding the matter involving the late Malcolm Jones, who once served as Chairman of Petrotrin.

Rowley indicated that he has directed Energy Minister Franklin Khan to instruct Petrotrin to make the two witness statements available to the public.

His comments at the Post Cabinet media briefing on Thursday follow a ruling by the Privy Council ordering Petrotrin to release documents to UNC activist Ravi Balgobin Maharaj in relation to the State's decision to withdraw a multi-million dollar lawsuit against Jones.

In allowing the appeal, the five-member council comprising Lords Wilson, Hodge, Kitchin, Sales and Lady Arden said there appeared some grounds for thinking the decision by the state to abandon the case may have had some political influence.

Rowley said Government was usually unaware of these requests and only learn of them via the media, and the new policy would help save millions and prevent political embarrassment in these matters.