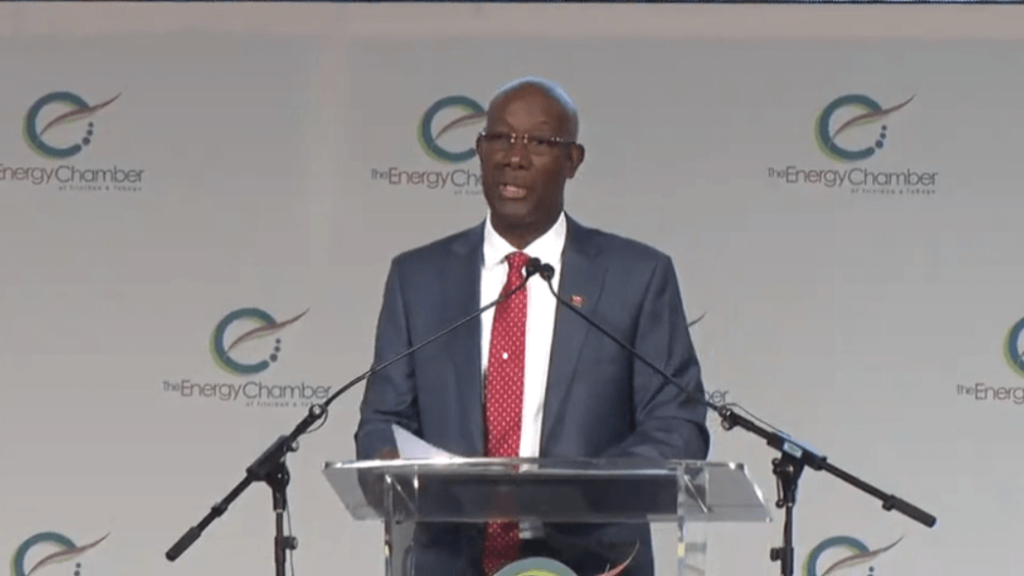 Prime Minister Dr Keith Rowley speaks at the opening of the Trinidad and Tobago Energy Conference and Trade Show at Hyatt Regency, Port of Spain on February 3, 2020.

US economic sanctions against Venezuela have effectively placed the Dragon project on hold.

The sanctions prevent US companies from doing business with Venezuelan oil company, PDVSA.

Prime Minister Dr Keith Rowley revealed the status of the project during the opening of the Trinidad and Tobago Energy Conference and Trade Show at Hyatt Regency, Port of Spain on Monday.

The project, which involves transporting gas over a 17 km pipeline from the Dragon Gas Field to the Hibiscus platform in T&T has been at a standstill owing to the deteriorating political situation in the neighbouring South American nation.

Rowley said, however, that once the sanctions obstructing the development are lifted, the project will continue as planned.

“At a moment notice, we are ready to move ahead with the project on the lifting of such restrictions since virtually all the preparatory work has been done.”

He explained that sanctions imposed by the US Government have affected other projects including the Manatee initiative.

US company Chevron has a 60 percent interest in the Loran field, to participate in the development of the Loran-Manatee Field.

Unlike the Dragon deal, however, Government will proceed with the Manatee project which the Prime Minister described as the “single most significant development in the energy sector in recent times”.

Both governments have agreed to the independent development of the field within the Loran-Manatee cross-border that falls within its marine area.

“Pursuant to this decision, the Government of the Republic of Trinidad and Tobago and the Bolivarian Republic of Venezuela rescinded the Unitisation Agreement for the exploitation and development of hydrocarbon reservoirs of the Loran- Manatee Field that extends across the delimitation line between the countries dated August 16, 2010 and executed the Agreement for the independent development of the cross-border field, Loran-Manatee.”

The Loran-Manatee has an estimated resource of 10.04 tcf, with 2.712 tcf within the Manatee field.

Shell Trinidad and Tobago Limited holds 100 percent interest in the Manatee field and has projected that gas production could start in the 2024/2025 period at rates ranging from 270 to 400 million standard cubic feet per day.

The Prime Minister revealed that Shell is in conversation with Government and is working on various development scenarios to determine the best way forward.

He said that the rescinding of the Unitisation Agreement has implications for other cross-border fields such as the Manakin- Cocuina and the Kapok-Dorado which collectively have an estimated 850 billion cubic feet of natural gas within T&T’s maritime area.

Rowley added the agreement is a reflection of positive initiatives being undertaken by Government to meet domestic gas requirements for competitive energy as well as T&T’s retention of a place in the petrochemical and LNG business “for some considerable time to come”.