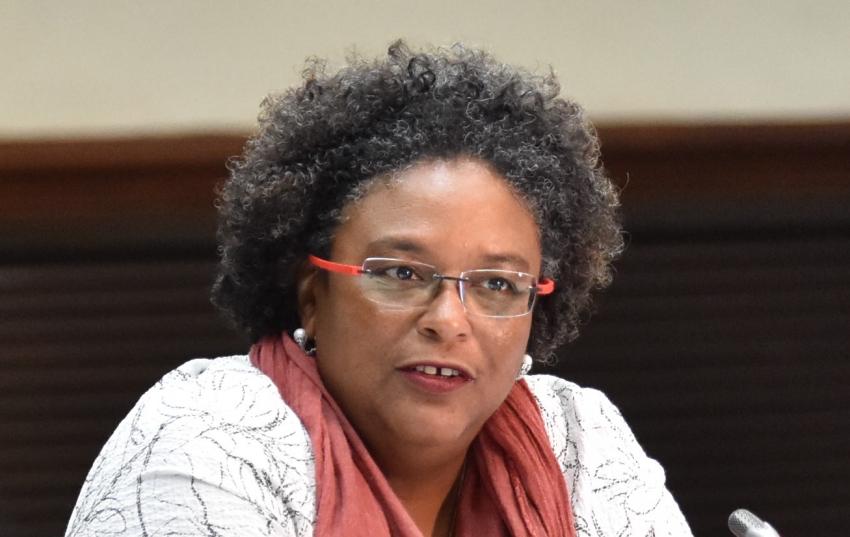 Introspection and swift intervention are critical to the future of Caribbean people.

While giving remarks at the opening ceremony of the Trinidad and Tobago Energy Conference earlier today, she said though her background is not in energy, her presence at the conference was prompted by her passion for the Caribbean.

PM Mottley said “Our growth has been anaemic at best as a region in the last 20 years. Our financial services sector is being threatened by underperformance and low growth, and as a result moves are being made to relocate financial institutions that have populated the region for in excess of a decade. It requires self-examination on our part to determine how we move at the beginning of the third decade  of the 21st century  to chart a way that can secure prosperity at best and stability at worst, for our people.”

She said there’s a lot of conjecture about the future of the region.

The Caribbean Development Bank projects that without intervention, this region could become one of the poorest in the world.

In response,  the CARICOM Chair said these are individuals whose job it is to look at data. She said they don’t understand the potential of political intervention or the will of the people.

“I have come to Port of Spain because in the year that I was born, four leaders of this region got together and determined that there had to be a future post the demise of the Federation. I’ve come to Port of Spain, because I also lead a political party whose constitution requires of us, that regional integration be the objective to which we aspire.”

She said she is conscious that even as we promote the integration movement not enough is being said and done about energy and energy issues in the Caribbean.

“With the exception of a veiled reference at article 15 of the revised Treaty of Chaguaramas that asked of COTED -which is the Council of Trade and Economic Development of our integration movement- that they literally promote measures for the promotion of energy and natural resources on a sustainable basis, the revised treaty of Chaguaramas is virtually mum on how we treat the issue of energy.”

She said this has been a source of contention for many, noting also that energy and electricity prices in the Caribbean have been prohibitive, particularly for those who are attempting to craft out a way of development that’ll benefit the people.

“When you look at the fact that you are meandering between 20US cents and 37US cents to be able to be able to produce electricity, no wonder the IMF has declared that this region is one of the regions that has had its competitiveness completely eroded by the cost of energy.”

She said the region has a duty to treat with the issue of the accessibility and affordability of energy for households and companies, and as a source of revenue and a potential saver of foreign exchange for governments.

PM Mottley said it is also imperative that we address the issue of financing for business owners, as she believes the region has become as risk-averse as it is humanly possible to be.

She said we can accept the CDBs projection or we can choose a different road.

“A road that was crafted initially by those who understood that the climb back from a region that has been highly exploited and colonised would require of us first confidence in our ability to manage our affairs, a determination that our actions be based on principles and values not just at the level of our leaders, but at the level of all in our society. And a determination that we should be fair to all, but always first fair to ourselves.”

PM Mottley was a special guest at the Trinidad and Tobago Energy Conference which started today and is scheduled to end on February 5.