PM: No one above rule of law 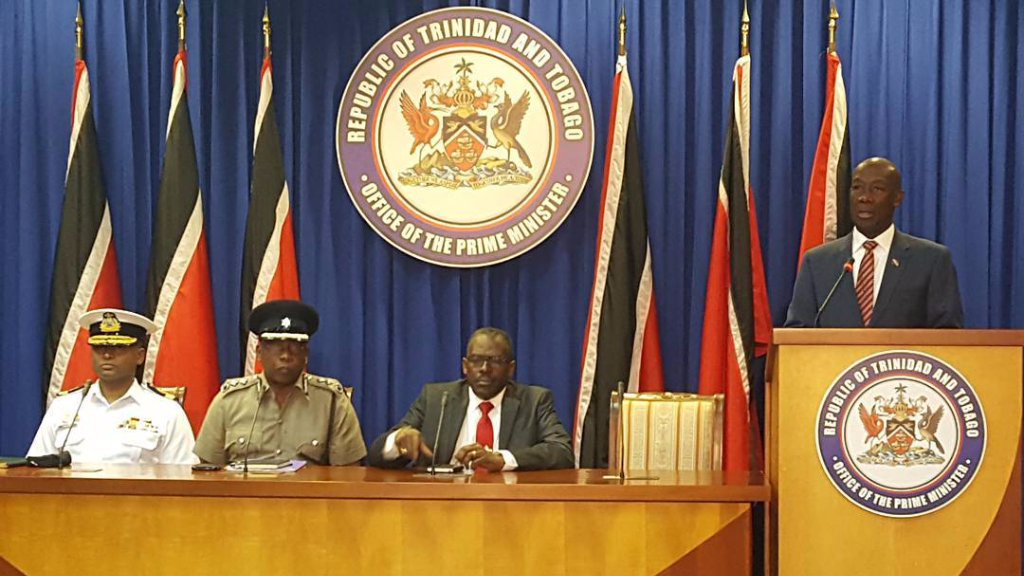 Government will not tolerate lawlessness, regardless of the difficult economic times the country is currently facing.

Prime Minister Dr Keith Rowley made the comment at a media conference at the Office of the Prime Minister earlier today, following the unrest in Beetham Gardens on Thursday.

Residents blocked roads seemingly in protest of the detention of two community leaders, however, they say the demonstration was meant to highlight their frustration with a lack of job opportunities.

Regardless of the circumstances that may prevail in communities there is no excuse for the lawlessness that we saw yesterday.”

Rowley assured that Government’s support for law enforcement is unwavering, adding that the Acting Commissioner of Police, the Chief of Defence Staff and all National Security agencies have the full support of the state to enforce the law across the country.

Responding to public reaction over a comment he made yesterday regarding the situation in the Beetham while at a function in Couva, the Prime Minister said he was not in a position to comment.

"I simply said I was in Couva, dealing with the issue of Couva at the moment."

"All that happened in Couva is that someone stuck a microphone in my face and demanded an interview. I don't know that is how it is done."

He said he voluntarily hosts press conferences makes himself available for interviews so he expects "a little bit of good manners and a bit of consideration in situations like that".

Taking issue with unlawful occupation of properties, he gave Acting Commissioner of Police Stephen Williams the all clear to use all available resources under law to seek out individuals who have evicted the rightful owners from their homes and ensure that “lawful occupancy prevails”.

He also instructed National Security Minister Edmund Dillon to direct the Defence Force to provide support to all law enforcement agencies to ensure that police are not impeded in carrying out their duties.

Responding to a suggestion from a former national security minister, the Prime Minister said a police post is not the solution to the issues faced in communities like Beetham and Sea Lots.

“That may sound good but that cannot be the overriding solution. Where there is need and where we can afford to be, but we cannot take the position that we will put a police post on every street corner. What I am talking about is law enforcement across the board – from St Clair to Cedros, from Enterprise to the Beetham because that is how it’s supposed to be.”

Asked whether he would visit the community to speak directly with the residents, Rowley said, he is prepared to speak with all citizens across the country, in the right conditions – on a situational basis and if time permits.

Regarding action to be taken against those engaged in throwing stones and other projectiles during yesterday's demonstration, the Acting Commissioner of Police said CCTV footage is currently under review with individuals identified as having a part to play in the event to be prosecuted.

"I have directed a team to focus on prosecuting individuals coming out of yesterday's event."

Williams stressed, however, that the entire Beetham community is not lawless and it is only some residents who carry out crimes. He said the country ought to encourage the positives happening with the community.