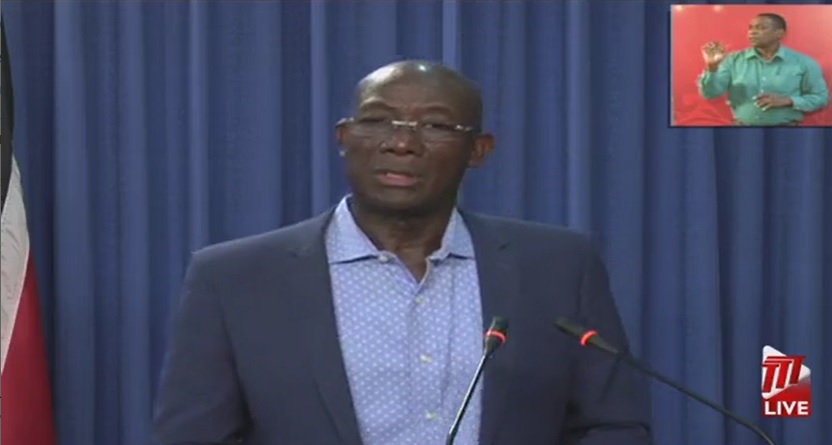 Prime Minister Dr Keith Rowley is calling on Commissioner of Police, Gary Griffith, to distribute the law equally. His statement follows days of uncertainty and uproar surrounding police officers’ decision to let a group of pool partiers in a gated community go uncharged.

In a media conference today, Dr Rowley called on the Commissioner to hold everyone to account for their errant actions.

“In Trinidad and Tobago, we expect that the law must be applied to every person, regardless of race, colour, creed, class or social standing,” he said.

Dr Rowley said that while he’s in no position to tell the Commissioner how to do his job, he does expect the police to act responsibly in all situations.

“It is not for me to tell the Commissioner of Police who to arrest or how to arrest or how to apply the law, but as Prime Minister, I could tell the Commissioner of Police that the law must apply to protect us in Trinidad and Tobago from those who are not prepared to listen and not prepared to fight the fight that we want to fight to bring this virus under control,” he said.

The Prime Minister also turned his gaze on those who thought it suitable to gather for the event. He called on the citizenry once again to be responsible.

“Persons who are partying and spreading this virus must be addressed in the full brunt of the law in Trinidad and Tobago,” he implored.

Dr Rowley called on Minister of National Security, Stuart Young to further clarify whether the police had jurisdiction on public property. Young, confirming that police can intervene, called on the Commissioner to distribute the law equitably.

“The police will be very cautious about getting involved in private property as they rightfully should be, but they do have jurisdiction.

“As the Prime Minister said, and I’d just like to join him, we have always said: No one is above the law and the law applies for everyone,” he said.

Earlier this week videos and photos circulated on social media of a group of people at Bayside Towers, having a pool party on the premises. A newspaper reported that the group was warned multiple times before police were called in and even then, they were dispersed without charge.

Since then, Commissioner Griffith has repeatedly defended his officers’ action, explaining that there is some complexity in treating with private premises.

PM: No new measures, but wear your masks

No changes to COVID-19 measures, PM asks for more time