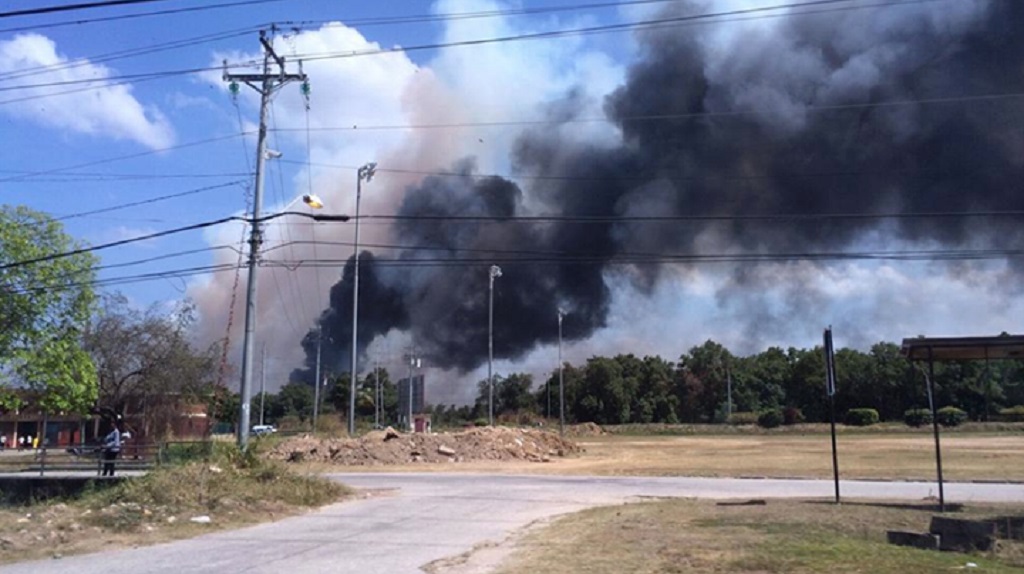 Photo: Toxic fumes from a fire at the Port of Spain landfill, dated 2015, courtesy the ODPM.

Toxic fumes emanating from the country's landfills will soon reach suburban neighbourhoods such as Westmoorings, if the issue is not addressed.

Speaking at a panel discussion entitled 'An Equal Place?' which discussed issues concerning gender, class, ethnicity, sexuality, religion, and human rights, president of the Industrial General and Sanitation Workers Union (IGSWU), Robert Benacia, said the poison emanating from the country's landfills will affect the upper classes, emphasising that this was the only way to get his point across as the needs of the workers who were exposed daily to those fumes were being ignored.

(Video: President of the IGSWU, Robert Benacia, speaks at the panel discussion 'An Equal Place?' at the Old Fire Station, Port of Spain. The event took place on Thursday, May 2, as part of the 2019 Bocas Lit Fest.)

"These workers work on the dumps of Trinidad...if there is anyone here interested in the environment, we need to force the government to enforce international standards.

"These dumps are poisoning our workers, and those of you that feel you're safe, whether you live in Woodbrook or Westmoorings, you're not, because the dust coming off of these dumps, head westward with the air currents and swing north into Port of Spain for all who working in Port of Spain."

"When your children reach the age of 35 and 40 and are playing in their backyards in Westmoorings...I'm appealing to these people because the people in Laventille and Morvant...do not have the connections to force these idiots to do what is right."

"Workers....are treated like slaves, and anyone who believes in social justice will support these workers," he said.

He also claimed persons have attempted to solve the issue were removed, calling it an 'assasination of decent people, senior managers who wanted to do things right'.

"That attack on a decent man of integrity is taking place right now with another...they want to frustrate him into resigning so they can bring in somebody else," he said.

According to media reports, sanitation workers were in negotiations with the Solid Waste Management Company (SWMCOL) over salary negotiations and working conditions for the period 2014-2016.

The meeting was called to discuss some of the pressing issues facing workers represented by the unions, including health hazards faced by workers and the general population due to the operations of the Night Soil Division at its present location; the need for de-sludging of the existing waste ponds, and the construction of a wheel washing bay for service trucks.

During the discussions, SWMCOL’s CEO, Ronald Roach, gave the assurance that the de- sludging process will begin in May. Roach added that the company will also undertake the construction of a concreate platform to facilitate the offloading of trucks, along with the installation of the wheel washing bay.

President of the IGSWU, Robert Benacio, also highlighted the urgent need for paving of the roads at the landfill site. Minister Le Hunte assured the union head that funding has been allocated for that purpose and the paving of the roads will be given priority.

SWMCOL’s Deputy Chairman, Glenn Goddard, told the union representatives that the company has every intention to treat with all of the issues affecting its operations, pointing out that several of them are legacy issues which will take some time and significant investment to be rectified.

He indicated that SWMCOL is exploring the possibility of securing financing for some of its major projects through international funding agencies, in addition to the financial support provided by the Ministry of Public Utilities.

Chief Executive Officer of the Port of Span City Corporation Annette Stapleton – Seaforth, assured that this issue will be immediately addressed.