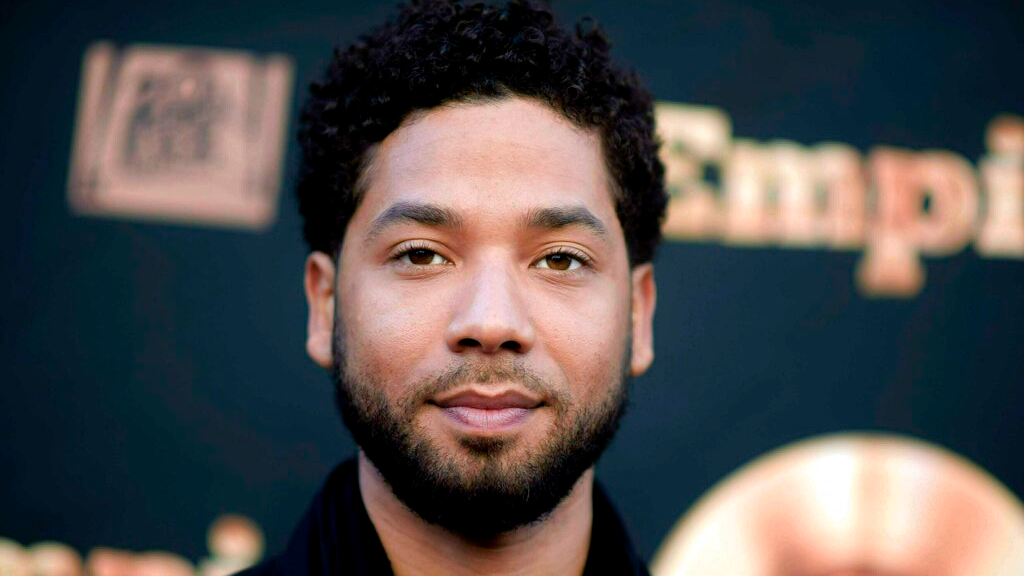 FILE - In this May 20, 2016 file photo, actor and singer Jussie Smollett attends the "Empire" FYC Event in Los Angeles. Chicago police said Sunday, Feb. 17, 2019, they're still seeking a follow-up interview with Smollett after receiving new information that "shifted" their investigation of a reported attack on the "Empire" actor. (Richard Shotwell/Invision/AP, File)

Chicago police investigated but dismissed a tip that on the night "Empire" actor Jussie Smollett reported being attacked by two masked men he was in an elevator of his apartment building with two brothers later arrested and released from custody in the probe, a department spokesman said Tuesday.

Police spokesman Anthony Guglielmi said a person who lives in the building or was visiting someone there reported seeing the three together the night in question last month. However, he said video evidence allowed investigators to determine the report wasn't credible.

Guglielmi said the two brothers did meet with prosecutors and police Tuesday in a Chicago courthouse. There was no immediate information about what they discussed.

Smollett said two masked men hurled racial and homophobic slurs at him, beat him and looped a rope around his neck. Last week, Guglielmi said media reports about the attack being a hoax were unconfirmed by case detectives.

But on Saturday, police announced that the "investigation had shifted" following interviews with the brothers and their release from custody without charges. Police have requested another interview with Smollett.

Smollett's lawyers have said the actor was angered and "victimized" by reports he may have played a role in staging the attack.

"Nothing is further from the truth and anyone claiming otherwise is lying," the statement from attorneys Todd Pugh and Victor P. Henderson said in a statement late Saturday.

Anne Kavanagh, a spokeswoman for Smollett's lawyers, said they would "keep an active dialogue with Chicago police on his behalf." Kavanagh didn't immediately respond to a request for comment Tuesday.

A California misdemeanor complaint against Jussie Smollett in 2007 shows the actor pleaded no contest to giving false information to police when he was pulled over for driving while under the influence.

Court records show that Smollett was accused of identifying himself as his younger brother and signing a false name on the promise to appear in court. Smollett also was later charged with false impersonation, driving under the influence and driving without a valid license. He pleaded no contest to a reduced charge and took an alcohol education and treatment program.

The details of the complaint were first reported by NBC News.

Also Tuesday, Cook County State's Attorney Kim Foxx said that she is recusing herself from the current investigation in Chicago.

"Out of an abundance of caution, the decision to recuse herself was made to address potential questions of impartiality based upon familiarity with potential witnesses in the case," Foxx's spokeswoman Tandra Simonton said. Asked who Foxx is familiar with, Simonton said Foxx would have no further comment.

Smollett, who is African-American and openly gay, reported he was physically attacked while he was getting a sandwich around 2 a.m. on Jan. 29 near his home in downtown Chicago. He said the men shouted the slurs and yelled "This is MAGA country," an apparent reference to President Donald Trump's campaign slogan, "Make America Great Again." Smollett also said the attackers poured some kind of chemical on him.

Police looked through hours of video surveillance from the area but found no footage of an attack. They did find and release images of two people they said they wanted to question.

On Wednesday police picked up two brothers at Chicago's O'Hare Airport as they returned from Nigeria and questioned them about the attack. They also searched the apartment where the men live.

The men, who had been held for nearly 48 hours on suspicion of assaulting Smollett, were released Friday. Guglielmi said the next day that information police received from the men "has in fact shifted the trajectory of the investigation."