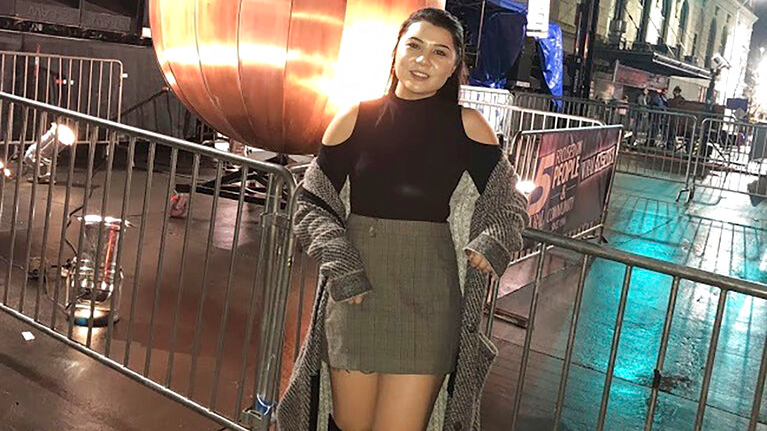 Kaitlyn Kong thought she had been punched hard in the abdomen as she stood among thousands of people in downtown Raleigh, North Carolina, as the new year arrived a year ago. Her best friend, standing next to her, thought Kong had been stabbed as blood poured from a wound.

It wasn't until Kong underwent an X-ray that she and hospital medical staff realised she had been shot after someone fired a gun into the air to celebrate the new year.

Although rare, people being shot by celebratory gunfire on New Year's Eve and other holidays like the Fourth of July does happen, prompting law enforcement authorities to caution people that bullets fired into the air can endanger people's lives.

Raleigh police Lt. Mario Campos said the city receives a small number of calls about gunfire during New Year's Eve celebrations in the city but would not discuss what happened to Kong, saying it remains under investigation. Raleigh police said at the time that the shot could have been fired from several blocks away.

“Our message has always been not to do it because it's dangerous and illegal in our city,” Campos said. “Bullets can travel a long distance. Any gunfire discharged into the air has to come down and land on something.”

A 9-year-old boy in Cleveland was wounded by a stray bullet last New Year's Eve as he watched television inside his family's home. The boy's mother declined to be interviewed. Another 9-year-old boy in Atlanta was shot in the abdomen by celebratory gunfire early January 1 while he and his family set off fireworks.

A 4-year-old boy was killed in 2010 in Decatur, Georgia, when an AK-47 round penetrated a church roof and struck him in the head as he sat next to his parents during a New Year's Eve service.

Kong, then a senior at the University of North Carolina-Chapel Hill, headed to downtown Raleigh with her friend for the city's family-friendly First Night celebration. Kong, 23, said she was pointing her phone upward to capture video of fireworks as confetti floated down on the crowd when it suddenly felt as if she had been punched “super hard," prompting her to clutch her friend's shoulder, not able to speak.

Bystanders helped move her out of the crowd, and a police officer called for an ambulance while pressure was applied to the wound.

“I didn't think it was that serious, but I was hurting a lot," Kong said.

It turned out to be quite serious. The bullet entered her chest and penetrated a lung, her diaphragm and stomach before lodging near her hip. Kong underwent a four-hour surgery. She recovered enough to return to classes days later with some assistance. She graduated in May with a degree in environmental studies.

“If it had been any higher, it could have done some permanent damage, to say the least,” Kong said.

A 2004 study from the Centers for Disease Control and Prevention said people struck by gunfire shot into the air are most likely to be hit in the head.

That's what happened to Texas state Rep. Armando Martinez as he celebrated the new year at a friend's home in Weslaco, Texas, on January 1, 2017. He and his family had waited in the friend's garage until gunfire had subsided to let off fireworks, he said.

Martinez told NBC News that his wife had just wished him a happy new year with a kiss when a .223-caliber round fell from the sky and penetrated his skull. It felt, he said, as if he had been “hit by a sledgehammer."

“I was extremely lucky,” Martinez said. "My surgeons said if it went a couple more millimeters deeper, I may not have been able to have this conversation right now."

Carl Leisinger III, a retired New Jersey State Police major and supervisor of the agency's forensics laboratory, said a 9 mm round like the one that wounded Kong would typically leave the barrel at around 1100 feet per second and then fall down at 200 to 300 feet per second. How far a bullet fired into the air travels sideways will depend on wind and other factors, he said.

Kong said she plans to celebrate somewhere this New Year's Eve, but not in downtown Raleigh.

“You can't let it stop you from living your life,” she said. “Maybe I'm that kind of person.”