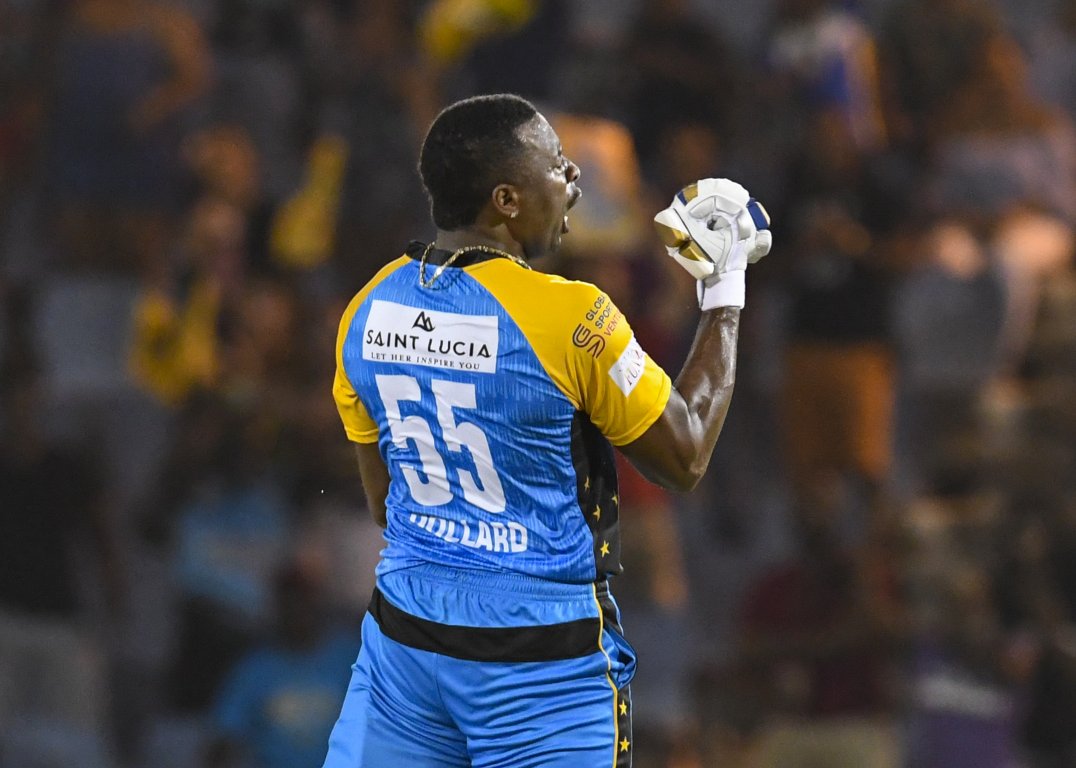 A maiden T20 hundred from skipper Kieron Pollard at last propelled St Lucia Stars to a first Hero Caribbean Premier League (CPL) victory in 15 matches as the disappointment of 24 hours earlier was washed away in a dominant 38-run victory over Barbados Tridents.

The Stars had appeared certain to end their losing streak a day earlier against Trinbago Knight Riders, but failed to defend 85 in the last five overs to slide to a demoralizing five-wicket loss.

The schedule, though, presented the Stars with the chance to put things right immediately, and it was their captain who led by example, blasting his way to a six-laden 53-ball century – remarkably his first in T20s in his 384th innings – and sharing a sparkling 148-run partnership with Andre Fletcher (80 from 52) in a Hero CPL record score of 226/6.

And, despite 58 off 45 from Tridents opener Dwayne Smith, there was to be no repeat of the previous night’s heartbreak as Barbados’ run-chase stalled in the middle overs and came up well short on 188/6.

The Stars needed a good start with the ball to stop the old doubts resurfacing, and Mitchell McClenaghan provided it. The experienced New Zealander gave up just 20 runs in three Power Play overs with the new ball and picked up the key wicket of his international team-mate Martin Guptill.

Leg-spinner Qais Ahmad, who didn’t bowl a single ball in defeat to the Knight Riders, then stopped the run-chase in its tracks conceding just 29 from four overs bowled off the reel in the middle of the innings and picking up the big wickets of Dwayne Smith and Hashim Amla.

The required rate was up to 17 – the point it reached with five overs to against the Knight Riders, but this time with eight overs remaining.

It was too much. Nicholas Pooran smashed a couple over the ropes but was deceived by an Obed McCoy slower ball attempting a third and sliced the ball to deep extra-cover where David Warner held a steepling catch.

Steve Smith slapped three fours in the 16th over from namesake Odean Smith, but by now the required rate was well into the 20s.

Understandably perhaps, the Stars were visibly nervous as they looked to close out the game after such a long winless streak. McClenaghan’s final over cost 24 runs with Shai Hope hitting two sixes and Smith another. It would ultimately prove telling that those three sixes doubled the Tridents’ tally for the innings on a pitch that had seen more than 50 Hero Maximums in the previous three innings.

The relief around the Daren Sammy Stadium was palpable when Steve Smith perished in the next over, carving McCoy to deep point to depart for 28 from 16 balls. Finally, with the Tridents’ target reaching 58 from 12, the players and supporters in St Lucia could relax.

The Stars had made it clear right from the start of their innings that their response to the previous day’s disappointment was going to be an aggressive one.

Fletcher, the one batsman to miss out for the Stars against the Knight Riders, went after Mohammad Irfan from the off with the second and third balls of the innings disappearing into the stands. The next two both went for four and the Stars had 20 on the board after the first over.

Warner, perhaps caught up in the excitement of Fletcher’s early fireworks, flashed at the second ball of Jason Holder’s opening over to be caught behind.

Rahkeem Cornwall continued his pinch-hitting role at number three and he too took the fight straight to the Tridents attack. It was shot-a-ball stuff from the big all-rounder who hit two fours and three big Hero Maximums to reach 30 in just 10 balls before skying Wahab Riaz to mid-off.

Wahab had been held back until the second half of the innings in the Tridents’ opening victory in Guyana, but Holder had little option but to turn to him early here such was the extent of the carnage as the Stars raced to 56/1 from the first four overs. It paid off, with Lendl Simmons adjudged lbw to the very next ball after Cornwall’s departure.

It was clear, though, that the Stars were not in the mood to take the foot off the pedal here. The return of Irfan saw Fletcher carving a six over point and four more inside-out over extra cover as a breathless Power Play ended with 67/3 on the board.

Kieron Pollard, on the back of that 18-ball 50 against the Knight Riders, was soon also clearing the boundaries against his former team as the Stars raced to three-figures before the halfway stage of the innings.

Two boundaries for the Stars skipper took him into the 40s as 11 runs from Irfan’s final over saw the left-armer bring up his own unwanted half-century.

Fletcher and Pollard both reached half-centuries, in 34 and 33 balls respectively, but the Tridents were able to keep a lid on the scoring with only 41 runs coming from five overs between the 12thand 16th of the innings.

Ashley Nurse, Holder and Wahab were all giving the Tridents some control, but Barbados’ problems were Irfan and Reifer.

The return of Reifer for over 17 got the Stars back into top gear as Fletcher swatted a high no-ball for six and then dispatched the resultant free-hit for another Hero Maximum and then drilling the last ball of the over downtown for six more.

Holder couldn’t stem the flow this time as Pollard pulverised a short ball over midwicket onto the grass bank before going even bigger next ball as he sent a full delivery screaming high over the pavilion.

Another Pollard six brought up the 200 at the start of the 19th over; it was the 50th six in three innings at the Daren Sammy Stadium.

And the man himself was at the crease moments later when Fletcher fell for 80 from 52 as an attempted ramp found only short fine-leg.

A four through midwicket took Pollard into the 90s and with it his highest T20 score. A pair of scampered twos took Pollard to 98 and kept him on strike to launch another six down the ground and register that elusive first T20 hundred. He fell to the next ball, with Sammy following to his first, but it mattered not. This time, at last, the Stars had enough.