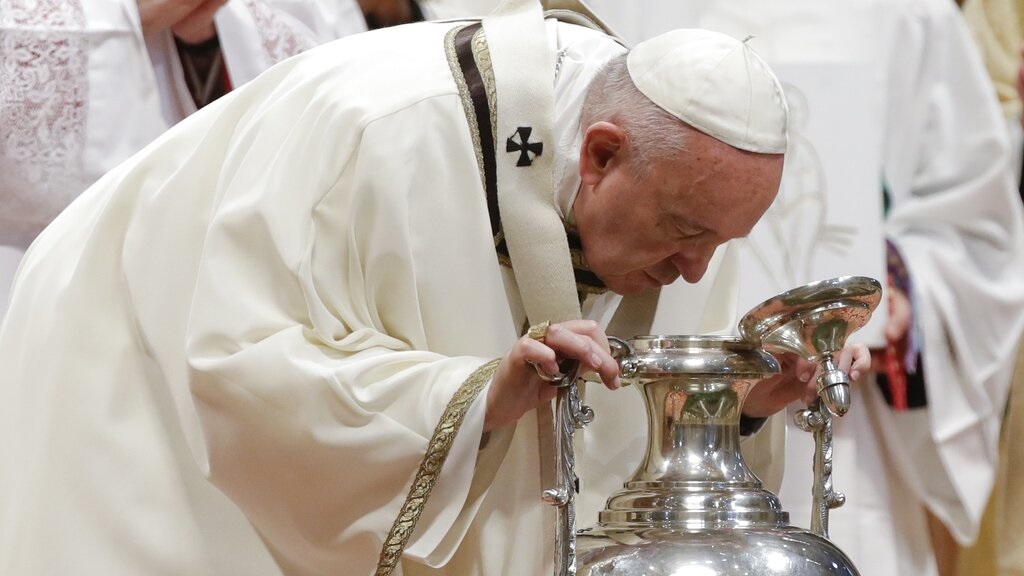 Pope Francis blows inside an amphora containing holy oil during a Chrism Mass inside St. Peter's Basilica, at the Vatican, Thursday, April 18, 2019. During the Mass the Pontiff blesses a token amount of oil that will be used to administer the sacraments for the year. (AP Photo/Alessandra Tarantino)

Pope Francis is ushering in the most solemn period in the Catholic liturgical calendar by celebrating a Holy Thursday Mass, made more poignant this year following the devastation of Paris' Notre Dame Cathedral.

The Crism Mass celebrates the unity of priests with their bishops. During Thursday's service, Francis blessed the holy oils that will be used over the course of the year in the administration of sacraments.

In his homily, Francis stressed that when priests use the oil, they are distributing their vocation and heart to the people of God.

This year, Holy Week — which for Catholics commemorates Christ's crucifixion, death and resurrection — has taken on particular meaning following the fire at Notre Dame, a symbol of French Catholicism.

Francis has offered his condolences repeatedly to the French faithful, and on Wednesday fielded a call from U.S. President Donald Trump offering the sympathy of the American people over the loss, the Vatican spokesman said.

Later Thursday, Francis travels outside Rome to Velletri, where he will celebrate the ritual foot-washing ceremony at a prison. Francis has frequently chosen to wash the feet of prisoners during the Holy Thursday ritual, which re-enacts Christ's washing the feet of his disciples, in a bid to show his willingness to serve even those on the farthest margins of society.

On Friday, he presides over the Way of the Cross procession at Rome's Colosseum re-enacting Christ's crucifixion, followed by the Easter Vigil and Easter Sunday.

Pope to parents: It's OK to fight, just not in front of kids