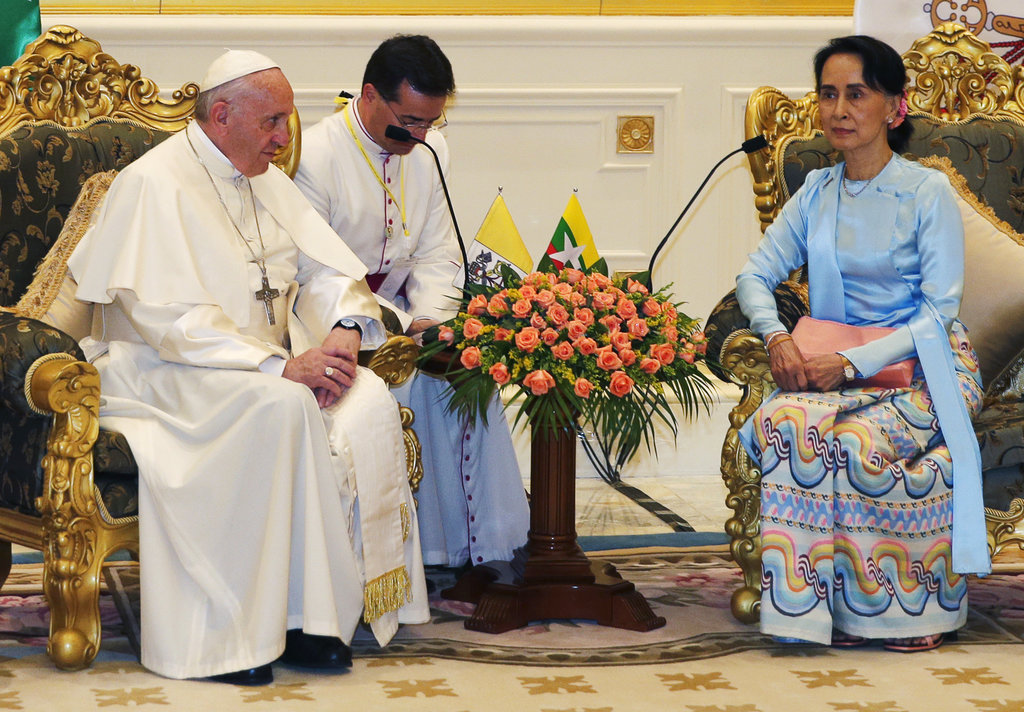 Pope Francis insisted Tuesday that Myanmar's future depends on respecting the rights of each ethnic group, an indirect show of support for Rohingya Muslims who have been subject to decades of discrimination and a recent military crackdown described by the U.N. as a textbook campaign of "ethnic cleansing."

Francis didn't cite the crackdown or even utter the contested word "Rohingya" in his speech to Myanmar's civilian leader, Aung San Suu Kyi, and other authorities and diplomats in the capital. But he lamented how Myanmar's people have suffered "and continue to suffer from civil conflict and hostilities," and insisted that everyone who calls Myanmar home deserves to have their basic human rights and dignity guaranteed.

Rohingya Muslims have faced state-supported discrimination in the predominantly Buddhist country for decades, deprived of citizenship and unable to access basic services such as adequate education and healthcare. In August, the army began what it called "clearance operations" in Rakhine state following an attack on police posts by Rohingya insurgents. The violence, looting and burning of villages has forced more than 620,000 Rohingya to flee to Bangladesh.

In his most anticipated speech of his weeklong trip to Myanmar and Bangladesh, Francis expressed support for Suu Kyi's efforts to bring about reconciliation among different groups after decades of military dictatorship. And he insisted that religious differences in the majority Buddhist country must never be a cause for division or distrust.

"The future of Myanmar must be peace, a peace based on respect for the dignity and rights of each member of society, respect for each ethnic group and its identity, respect for the rule of law, and respect for a democratic order that enables each individual and every group - none excluded - to offer its legitimate contribution to the common good," he said.

Francis' avoidance of the term "Rohingya" and his encouragement for Suu Kyi's government disappointed Rohingya activists and human rights groups, who have criticized Suu Kyi for what they consider a weak response to the military crackdown. Suu Kyi's supporters — including the Catholic Church — say she is limited in what she can say against the military and needs more time to bring about reconciliation.

The term "Rohingya" is shunned by many in Myanmar because the ethnic group is not a recognized minority in the country. The question of whether Francis would use the term in a show of solidarity dominated the run-up to his trip.

"We thought that the pope was going to mention the suffering of Rohingya people, but now he cannot even use the name Rohingya and it's totally unacceptable," said Kyaw Naing, a 53-year-old Rohingya man who lives in a confined camp outside of Sittwe, in Rakhine state. "We are very sad that our identity cannot even be revealed."

Phil Robertson, deputy director of Human Rights Watch's Asia division, said he hoped the pope would use the term during Mass on Wednesday.

"The pope missed an opportunity to reinforce his previous messages that affirmed the rights of the Rohingya to self-identify and used the name that they had chosen for themselves," he said. "The Rohingya have been stripped of so many things, but their name should never be one of them."

Suu Kyi, for her part, referred to the "situation in the Rakhine" in her speech to Francis in the huge conference center in Naypyitaw, Myanmar's new capital. But she used the conflict as an opportunity to thank those who have supported the government as it seeks to "address long-standing issues — social, economic and political — that have eroded trust and understanding, harmony and cooperation" in Rakhine.

She said the government's aim is to carry forward the peace process and strengthen Myanmar's diversity "by protecting rights, fostering tolerance, ensuring security for all."

Francis arrived in Naypyitaw after meeting with leaders of Myanmar's different religious groups in Yangon at the archbishop's residence, and separately with a prominent but controversial Buddhist leader who has criticized the Rohingya.

The pope stressed a message of "unity in diversity" in his 40-minute meeting with Buddhist, Hindu, Muslim, Christian and Jewish leaders and told them they should work together to rebuild the country, Vatican spokesman Greg Burke said.

Francis' meeting with Buddhist monk Sitagu Sayadaw was undertaken "in an effort to encourage peace and fraternal coexistence as the only way ahead," Burke said.

Sitagu also met with Francis's predecessor, Pope Benedict XVI, but has been criticized for using ethnic slurs against Muslims, particularly the Rohingya. He received an award presented by Suu Kyi earlier this year.

Francis dove into the Rohingya refugee crisis hours after arriving on Monday by meeting with the military chief responsible for the crackdown, Gen. Min Aung Hlaing, and three members of the bureau of special operations. The general's office said in a statement on Facebook that he is willing to have "interfaith peace, unity and justice." The general added that there was no religious or ethnic persecution or discrimination in Myanmar, and that the government allowed freedom of worship.

Rohingya Muslims were stripped of citizenship in 1982, denying them almost all rights and rendering them stateless. They cannot travel freely, practice their religion, or work as teachers or doctors, and have little access to medical care, food or education.

Myanmar's Catholic Church has publicly urged Francis to avoid saying "Rohingya," and they have urged him to toe a delicate line in condemning the violence, given the potential for blowback against the tiny Catholic community.

Francis previously has prayed for "our Rohingya brothers and sisters," lamented their suffering and called for them to enjoy full rights. As a result, much of the debate before his trip focused on whether he would again express solidarity with the Rohingya. Any decision to avoid the term and shy away from the conflict could be viewed as a capitulation to the military and a stain on his legacy of standing up for the most oppressed and marginalized of society, no matter how impolitic.

Zimbabwe forces say country back to 'normalcy' after crisis