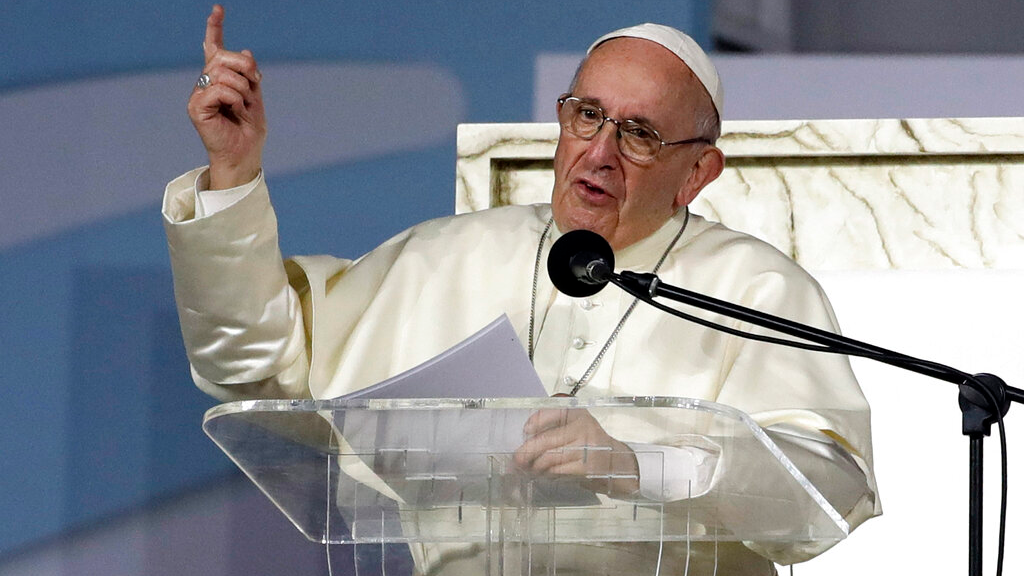 Pope Francis called Sunday for a "just and peaceful solution" to Venezuela's political crisis as he wrapped up a visit to Panama for a World Youth Day rally that was overshadowed by the upheaval unfolding nearby.

Francis refused again to say if the Holy See would recognise opposition leader Juan Guaido in his claim for the presidency, which has been backed by the United States and other regional leaders. The Vatican years ago was frustrated in its attempt to mediate between socialist President Nicolas Maduro and Venezuela's opposition, which has the backing of many Venezuelan bishops.

Speaking off-the-cuff at his Sunday blessing, Francis said he felt particularly close to Venezuelans while he was in Panama. He "asked the Lord to seek and find a just and peaceful solution to overcome the crisis that respects human rights and exclusively seeks the good of all people."

The Venezuela crisis has dominated Francis' visit to Panama, both behind the scenes and in public, with the pope at one point asking out loud if any Venezuelan bishops were on hand at the end of an event. The Vatican's secretary of state, Cardinal Pietro Parolin, was former ambassador to Venezuela so he knows the situation well.

Francis made the Venezuela comments after he closed out World Youth Day with a Mass in a Panama City field before an estimated 700,000 people and presidents from across the region: Colombia, Costa Rica, El Salvador, Guatemala, Honduras, Panama and Portugal.

"You dear people are not the future but the now of God," Francis told the pilgrims draped in flags from across the Americas.

At the end of the service, the Vatican announced the next edition of World Youth Day would be in Lisbon, Portugal, in 2022.

"Our trip was very long but it was worth it because we came here to Panama City because of our faith, our Christian faith," said pilgrim Sawadogo Kiswensidad, who travelled from Burkina Faso.

After Mass, Francis visited a church-run home for people infected with HIV, sending a strong message of acceptance in Panama, where AIDS carries a stigma.

"Many of the people we help here have been rejected by their families, by people in the street," said the Rev. Domingo Escobar, director of the Casa Hogar El Buen Samaritano. "But here they receive Christian help, as the church wants."

Using the parable of the Good Samaritan, who tended to a stranger in need, Francis called for an end to the indifference that society treats the poor and the sick.

"For indifference can also wound and kill. Some for a few miserable coins, others for fear of becoming unclean," he said. "The Good Samaritan, whether in the parable or in all of your homes, shows us that our neighbor is first of all a person, someone with a real, particular face, not something to avoid or ignore, whatever his or her situation may be."

Francis used his visit to the home to issue a string of appeals, beyond Venezuela. He appealed for peace in Colombia following a car bombing at a police academy that killed 21 people earlier this month. He denounced the bombing of a cathedral in the Philippines earlier Sunday. And he added his voice to the chorus of solidarity on Holocaust Remembrance day.

After meeting with World Youth Day volunteers, Francis was heading back to Rome to prepare for another big trip next weekend to Abu Dhabi, the first by a pope to the Arabian Peninsula.