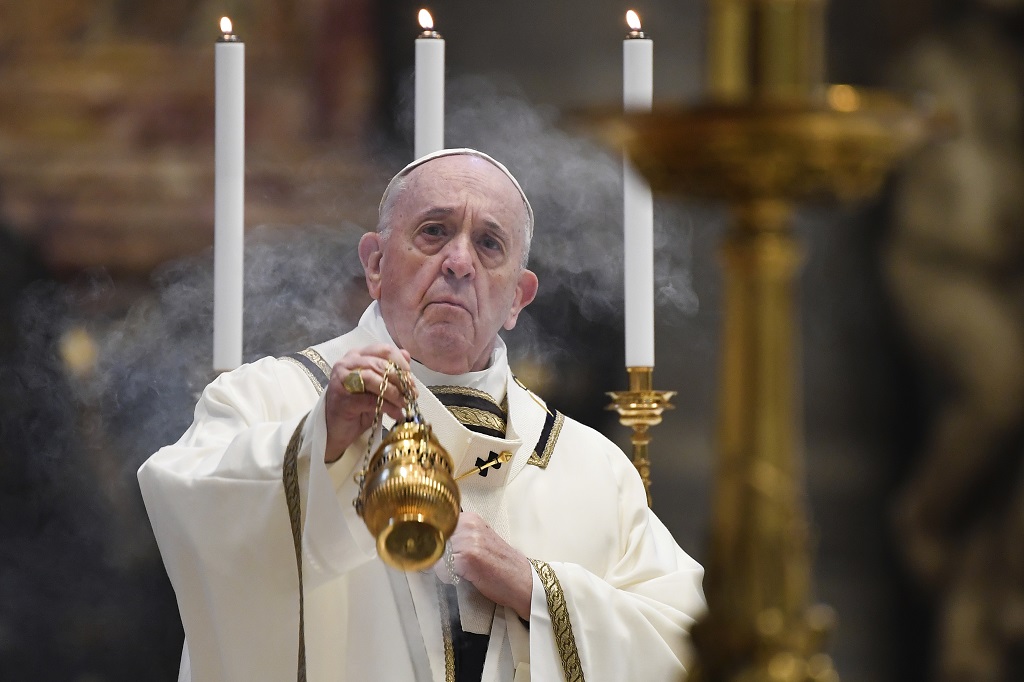 Pope Francis has singled out funeral home workers for people's prayers during the COVID-19 pandemic.

In Italy and some other countries, the deaths of people with coronavirus infections have meant funeral parlor workers must deal with the grief of families who aren't allowed to hold public funerals as part of government-ordered measures to try to contain the pandemic.

Francis says, "What they do is so heavy and sad. They really feel the pain of this pandemic so close."

The pope made the appeal for prayers during his early morning Mass on Saturday in the Vatican City hotel where he resides.

In past remarks, the pope has cited others for doing what he called heroic work during the pandemic, including doctors, nurses, supermarket clerks and transport workers.

The Vatican has its own lockdown, barring the public from its museums and religious ceremonies. It has reported nine coronavirus cases among the residents or employees of the walled, independent Vatican City State.

LONDON — British medical authorities are urging people not to ignore symptoms of conditions other than the coronavirus. The move comes amid fears that cancer and other illnesses are going untreated as the health system focuses on fighting the pandemic.

Public Health England says visits to hospital emergency departments have fallen by almost 50% in April from the same month last year. The charity Cancer Research UK has estimated that 2,250 new cases of the disease could be going undetected each week, partly because people are reluctant to go to hospitals for fear of catching the virus or overburdening the system.

The National Health Service is launching a public information campaign urging people to seek urgent help if needed and to continue to attend services such as cancer screening and maternity appointments. It says the system still has capacity to treat other conditions.

BERLIN — Chancellor Angela Merkel is looking forward to a German presidency of the European Union that will be dominated by the coronavirus crisis. But she says that other questions such as climate policy won't be neglected.

Germany will take over the 27-nation EU's rotating presidency from Croatia for six months starting July 1. In her weekly video podcast Saturday, Merkel pointed to the dramatic economic fallout from the pandemic and said it will be important "to show in the coming weeks and months that we belong together."

EU leaders have agreed on the need for a massive recovery plan and also face the task of agreeing on the EU's next regular seven-year budget.

Merkel also said that "the question will arise of how we can build an efficient European health system in all member states." She said she wants there to be "more Europe" at the end of the German presidency.

LONDON — Britain's government has defended the independence of the group of scientists advising on the coronavirus pandemic after it emerged that Prime Minister Boris Johnson's controversial chief aide had attended meetings of the panel.

After a report in The Guardian, the government confirmed that Dominic Cummings had attended several meetings of the Scientific Advice for Emergencies, or SAGE, and listened to discussions. But it denied Cummings -- who is not a scientist --was a member of the group. The government said "SAGE provides independent scientific advice to the government. Political advisers have no role in this."

SAGE is a usually little-known group headed by Chief Scientific Adviser Patrick Vallance and Chief Medical Officer Chris Whitty. The government has declined to publish its full membership, saying that could leave the scientists open to lobbying or pressure.

As Britain's official toll from the virus approaches 20,000 dead, the government's response is under increasing scrutiny, especially its perceived slowness in imposing a nationwide lockdown.

BERLIN — The World Health Organization is cautioning against the idea of "immunity passports." It says there is currently no evidence that people who have recovered from COVID-19 and have antibodies are protected against a second infection.

The concept of "immunity passports" or "risk-free certificates" has been floated as a way of allowing people protected against reinfection to return to work.

But the Geneva-based U.N. health agency says in a scientific brief released Saturday that more research is needed. It says that "at this point in the pandemic, there is not enough evidence about the effectiveness of antibody-mediated immunity to guarantee the accuracy of an 'immunity passport' or 'risk-free certificate.'"

It argues that people who assume they are immune to reinfection may ignore public health advice, and such certificates could raise the risks of continued virus transmission.

WHO adds that tests for antibodies of the new coronavirus also "need further validation to determine their accuracy and reliability."

NEW DELHI — India announces easing of a stringent lockdown for 1.3 billion people by allowing opening of neighborhood and standalone shops with restrictions such as 50% of workers with face masks and social distancing.

A home ministry statement issued late Friday says that shops in single and multi-brand malls would not be allowed to open anywhere in the country.

The relaxation also would not be applicable in hundreds of hotspots and containment zones across the country. India has so far reported more than 24,500 positive new coronavirus cases and 775 deaths. The worst-hit states are Maharashtra with 6,817 positive cases, Gujarat with 3,815 cases, New Delhi 2,514 and Rajasthan 2,034 cases.

India imposed a lockdown for its 1.3 billion people on March 25 and it is due to end on May 3. Last week, the government allowed resumption of manufacturing and farming activities in rural areas as millions of daily wage-earners were left without work.

The Home Ministry said the rise in number of positive cases in India is linear, not exponential.

SEOUL, South Korea -- South Korea has reported 10 fresh cases of the new coronavirus, the eighth day in a row its daily jump came below 20, as its outbreak slows amid tightened border controls and waning infections in the worst-hit city of Daegu.

The country also on Saturday reported no new deaths for the second straight day. The figures released from South Korea's Centers for Disease Control and Prevention on Saturday brought national totals to 10,718 cases and 240 deaths.

While a slowing caseload has allowed South Korea to relax its social distancing guidelines over the past week, Prime Minister Chung Sye-kyun raised concern over possible transmissions by "quiet spreaders" and instructed officials to conduct antibody tests in Daegu and nearby towns to learn how widespread the coronavirus is.

Chung also called for stronger financial tools to ease the epidemic's economic shock, which has caused severe cashflow problems for airlines while also hurting major exporters such as carmakers and shipbuilders.

The government is looking to create a 40 trillion won ($32 billion) fund through bonds issued by state-run banks to protect jobs in key industries, but the plan needs parliamentary approval.

South Korea's economy shrank 1.4% during the first three months of the year, the worst contraction since late-2008, as the pandemic hit both domestic consumption and exports.

BEIJING — For the 10th straight day, China reported no new deaths from the coronavirus.

Twelve new cases were reported on Saturday, 11 of them brought from overseas and one local transmission in the northeastern province of Heilongjiang bordering on Russia, according to the National Health Commission.

Just 838 people remain hospitalized with COVID-19 while another 1,000 people are undergoing isolation and monitoring for being either suspected cases or having tested positive for the virus while showing no symptoms.

China, widely believed to be the source of the global pandemic, has reported a total of 4,632 deaths among 82,816 cases.