Pope urges bold action to protect the Amazon amid fires 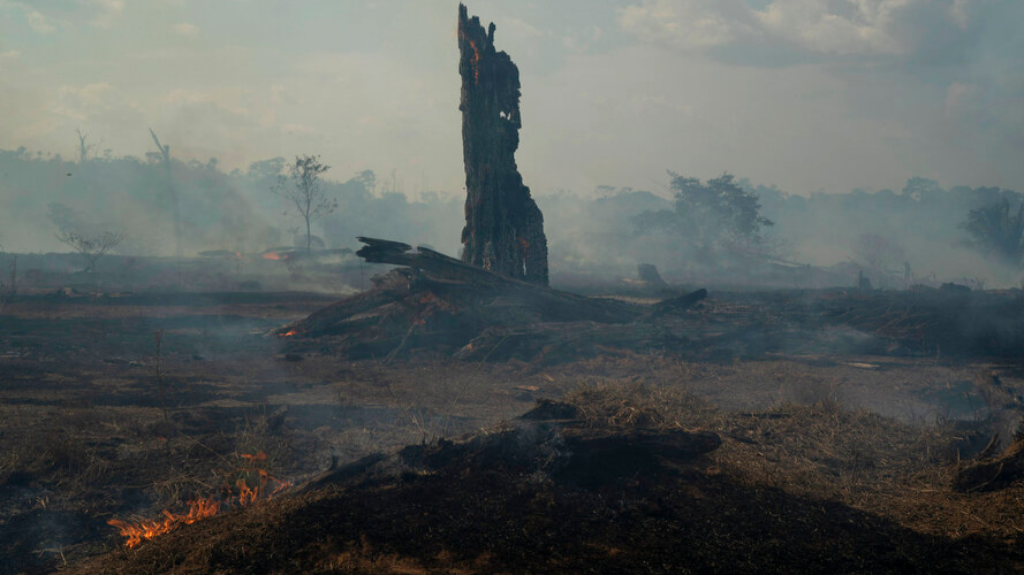 Pope Francis urged bishops on Sunday to boldly shake up the status quo as they chart ways to better care for the Amazon and its indigenous people amid threats from forest fires, development and what he called ideological "ashes of fear."

Francis opened a three-week meeting on preserving the rainforest and ministering to its native people as he fended off attacks from conservatives who are opposed to his ecological agenda.

Francis celebrated an opening Mass in St. Peter's Basilica on Sunday with global attention newly focused on the forest fires that are devouring the Amazon, which scientists say is a crucial bulwark against global warming.

On hand for the service were indigenous people from several tribes, some with their faces painted and wearing feathered headdresses, as well as more than 180 South American cardinals, bishops and priests, who donned green vestments like the pope.

They traveled to Rome from the region for three weeks of debate at a special synod, or meeting, that has become one of the most controversial of Francis' papacy.

Among the most contentious proposals on the agenda is whether married elders could be ordained priests to address the chronic priest shortages in the region. Currently indigenous Catholics in remote parts of the Amazon can go months without seeing a priest or having a proper Mass.

Another proposal calls for the church to identify new "official ministries" for women, though organizers have made clear that priestly ordination is off the table.

Francis' conservative critics, including a handful of cardinals, have called the proposals "heretical" and an invitation to a "pagan" religion that idolizes nature rather than God. They have mounted an opposition campaign, issuing petitions and holding conferences to raise their voices.

Yet in his homily, Francis urged the Amazonian bishops to go boldly forward, urging they be "prudent" but not "timid" as they discern new ways to protect the environment and minister to the faithful. He drew a distinction between the "fire" of missionary zeal and fires that aim to carve out the rainforest for agricultural uses.

"The fire set by interests that destroy, like the fire that recently devastated Amazonia, is not the fire of the Gospel," he said. "The fire of God is warmth that attracts and gathers into unity. It is fed by sharing, not by profits."

He prayed that God's "daring prudence" would inspire the bishops to bold action to protect the region.

"If everything continues as it was, if we spend our days content that 'this is the way things have always been done,' then the gift vanishes, smothered by the ashes of fear and concern for defending the status quo," he said.

In many ways, Francis opened the synod last year, when he travelled into the Peruvian Amazon and demanded that corporations stop their relentless extraction of timber, gas and gold.  Meeting with native families in steamy Puerto Maldonado, Francis declared that the Amazon and its indigenous peoples are the "heart of the church" and demanded that governments recognize their rights to determine the region's future.

The seeds of the Amazon synod, however, long predate that visit and even Francis' landmark 2015 encyclical "Praise Be," in which he denounced the profit-at-all-cost business interests destroying the rainforest.

The pope, when he was the former Cardinal Jorge Mario Bergoglio of Argentina, drafted the final document of the 2007 meeting of South American bishops in Aparecida, Brazil, which identified the Amazon and its indigenous peoples as threatened by global economic interests and deserving of the church's utmost attention.

Scientists say the vast rainforest's lush vegetation absorbs heat-trapping carbon dioxide from the atmosphere. The moisture given off by its trees also affects rainfall patterns and climate across South America and beyond.

While the numbers of fires burning in the Amazon declined sharply last month, parts of the rainforest burned at a pace in July and August unseen since 2010. That fueled global worries about climate change, put the Amazon fires on the agenda of the Group of Seven summit hosted by French President Emmanuel Macron and directed environmental outrage at the pro-development stance of Brazilian President Jair Bolsonaro.

Bolsonaro has repeatedly said he wants to promote economic development in the Amazon and regularize small-scale illegal mining. He has also strongly criticized foreign countries for meddling with what he sees is a domestic Brazilian matter.

Brazil bans most burning for 60 days to curb Amazon fires

Simmons warns Windies must not be complacent at Old Trafford