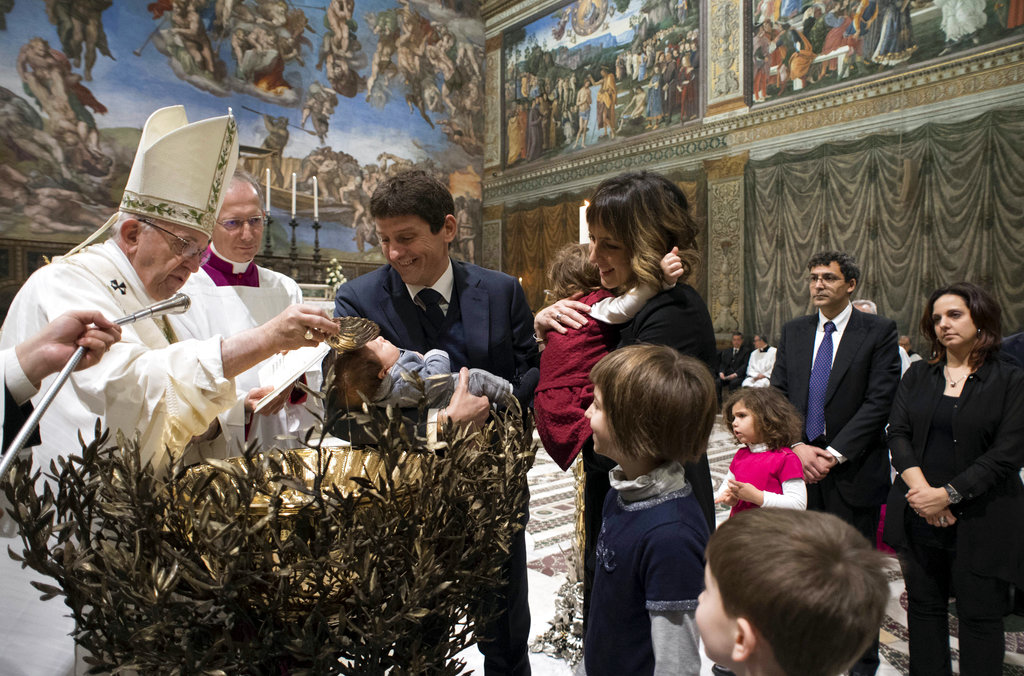 Pope Francis baptizes a baby at the Vatican. (L'Osservatore Romano/Pool Photo via AP)

Pope Francis urged concerted international efforts Monday to rebuild trust on the Korean peninsula and in Syria, using his annual foreign policy address to demand that political leaders put the dignity of their people before war, profit or power.

In a wide-ranging speech to ambassadors from some 185 nations, Francis reaffirmed the need to respect the status quo of Jerusalem and refrain from any initiative that exacerbates hostilities.

Francis didn't cite the United States by name, but many elements of his speech could have been read as an implicit appeal to the Trump administration: He called for governments to provide universal health care for all, demanded they respect commitments made in Paris in 2015 to curb global warming, urged them to better integrate migrants and to participate in a "serene and wide-ranging debate" on nuclear disarmament.

Speaking on the 100th anniversary of U.S. President Woodrow Wilson's proposed League of Nations, Francis said today's leaders can learn two lessons from the ashes of World War I: "That victory never means humiliating a defeated foe," and that war isn't deterred by the "law of fear, but rather by the power of calm reason."

He said it was of "paramount importance" to support every effort at dialogue "in order to find new ways of overcoming the current disputes, increasing mutual trust and ensuring a peaceful future for the Korean people and the entire world."

He also called for confidence-building measures in Syria and for the international community to facilitate the return of all refugees, particularly Christians who have fled communities that have had a Christian presence since the time of Christ.

He didn't refer to the U.S. decision to move its embassy to Jerusalem, but he cited "recent" tensions in the Holy Land in renewing what he called the Vatican's "pressing appeal that every initiative be carefully weighed so as to avoid exacerbating hostilities." He urged a two-state solution between Israel and the Palestinians and for Jerusalem's status quo to be respected, noting the city is sacred to Christians, Jews and Muslims.

Francis' sole mention of his native Latin America was over the deteriorating humanitarian situation in Venezuela, where the Holy See had tried — but failed — to facilitate talks between the government and the opposition. The Argentine pope said he hoped elections this year in Venezuela would resolve the existing conflicts and give residents hope for the future.