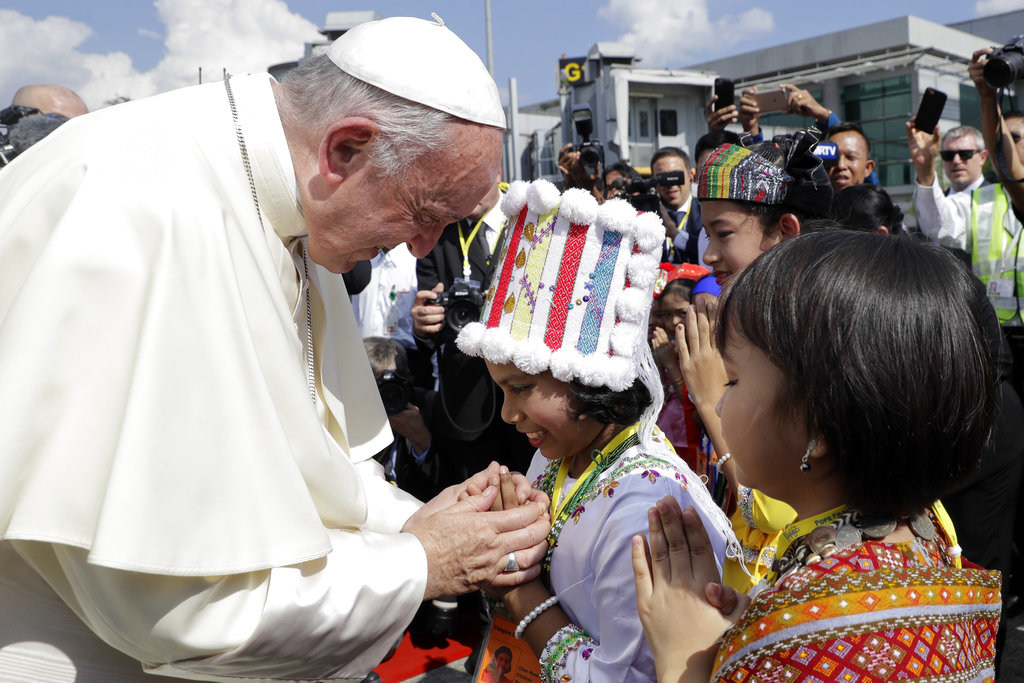 Pope Francis is greeted by young children in traditional clothes upon his arrival at Yangon's airport, Myanmar, Monday, Nov. 27, 2017. The pontiff is in Myanmar for the first stage of a week-long visit that will also take him to neighboring Bangladesh. (AP Photo/Andrew Medichini)

Pope Francis arrived Monday on a visit to Myanmar and Bangladesh to encourage their tiny Catholic communities and reach out to some of Asia's most peripheral and poor, but the big question looming is whether he'll utter the word "Rohingya" while he's here.

The "will he or won't he?" issue has dominated debate before Francis' trip, which began Monday and ends with a youth rally in Dhaka, Bangladesh, on Dec. 2.

Upon arrival in Yangon, the pope was greeted by local Catholic officials and his motorcade passed by thousands of Myanmar's Catholics, who lined the roads, wearing traditional attire and playing music.

Children in traditional dress greeted him as he drove in a simple blue sedan, chanting "Viva il papa!" (Long live the pope) and waving small plastic Burmese and Holy See flags. Posters wishing Francis "a heartiest of welcome" lined the route into town.

En route from Rome, Francis greeted journalists on the plane and apologized for the expected heat, which was 90 degrees Fahrenheit (32 Celsius) upon his arrival and is expected to rise during his stay.

In Myanmar, Francis will meet separately with the country's civilian leader, Aung San Suu Kyi, its powerful military chief and Buddhist monks. He'll greet a delegation of Rohingya Muslims and meet with Bangladesh's political and religious leadership in Dhaka. Masses for the Catholic faithful and meetings with the local church hierarchy round out the itinerary in each country.

Myanmar's local Catholic Church has publicly urged Francis to avoid using the term "Rohyingya," which is shunned by many locally because the ethnic group is not a recognized minority in the country. Rohingya in recent months have been subject to what the United Nations says is a campaign of "textbook ethnic cleansing" by the military in poverty-wracked Rakhine state.

Related article :US declares 'ethnic cleansing' against Rohingya in Myanmar

Francis, though, has already prayed for "our Rohingya brothers and sisters," and any decision to avoid the term could be viewed as a capitulation to Myanmar's military and a stain on his legacy of standing up for the most oppressed and marginalized of society, no matter how impolitic.

"Being a religious leader — Catholic leader — means that he is well-regarded, but of course there is this worry if he says something, people might say, 'OK, he just came to meddle,'" said Burmese analyst Khin Zaw Win, a former political prisoner. "So, I think a lot of diplomacy is needed, in addition to the public relations."

The trip was planned before the latest spasm of violence erupted in August, when Rohingya militants attacked security positions in Rakhine. Myanmar security forces responded with a scorched-earth campaign that forced more than 620,000 Rohingya to flee to Bangladesh, where they are living in squalid refugee camps.

In the Kutupalong refugee camp in southern Bangladesh, Senu Ara, 35, welcomed Francis' arrival for what he might be able to do for the refugees.

"He might help us get the peace that we are desperately searching for," she said. "Even if we stay here he will make our situation better. If he decides to send us back, he will do so in a peaceful way."

The signals from the Vatican going into the trip were mixed about how Francis would address the refugee plight: The Vatican spokesman used the term "Rohingya" in a pre-trip briefing and said, "It's not a prohibited word" as far as the Vatican was concerned. But the Holy See's top diplomat, Secretary of State Cardinal Pietro Parolin, avoided it in an interview with Vatican media on the eve of the trip.

The debate isn't just semantic: Myanmar's government and most of the Buddhist majority consider them Bengali migrants from Bangladesh living illegally in the country, though Rohingya have lived there for generations.

"It's going to be a tricky situation (if he uses the word), I think because most of the people can't accept it," said farmer Win Myaing.

Seaman Kyaw Thu Maung said the issue is difficult because the term "Rohingya" carries so much political weight for all of Myanmar's people.

"But my feeling is that if the pope is going to talk about the Rakhine issue, the people aren't going to like the pope anymore," he said.

US official: Rohingya should be returned safely to Myanmar