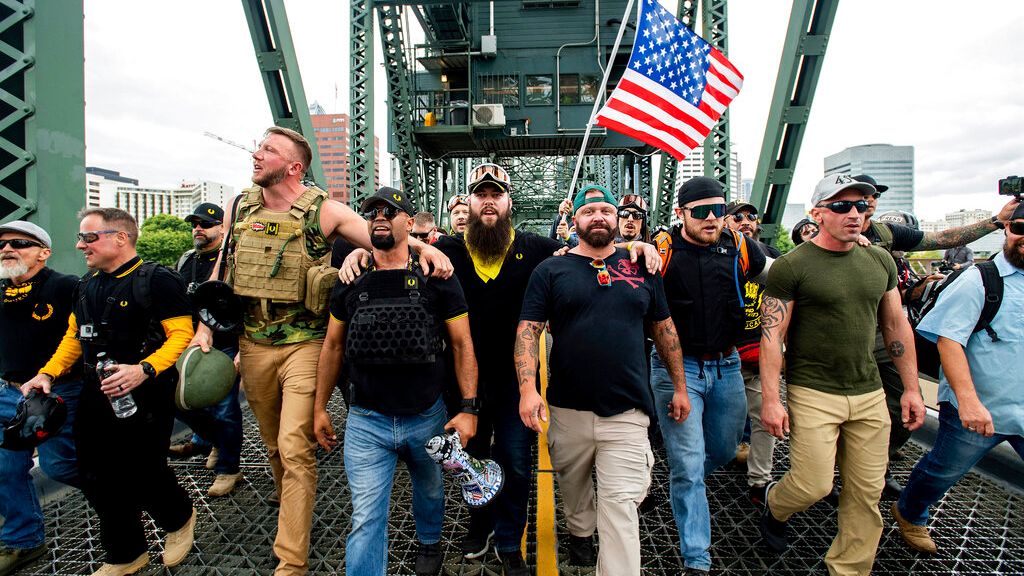 Hundreds of far-right protesters and anti-fascist counter-demonstrators swarmed downtown Portland, Oregon, on Saturday for a long-hyped rally that attracted President Donald Trump's attention and resulted in at least 13 arrests.

Police seized metal poles, bear spray and other weapons and closed bridges and streets to try to keep the rival groups apart. They were largely successful. Six minor injuries were reported.

"This was a dynamic event with demonstrators frequently moving from one part of the city to another," Mayor Ted Wheeler said at an evening news conference.

Leaders of the right-wing groups vowed to return to Portland, saying they would keep coming back to the liberal West Coast city so long as the left-wing antifascists, known as antifa, groups remained active.

President Donald Trump weighed in early Saturday, writing on Twitter that "Portland is being watched very closely... Hopefully the Mayor will be able to properly do his job."

He also wrote that "major consideration is being given to naming ANTIFA an 'ORGANIZATION of TERROR.'" It wasn't immediately clear what he meant by that because there's no mechanism for the United States government to declare a domestic organization a terror group. 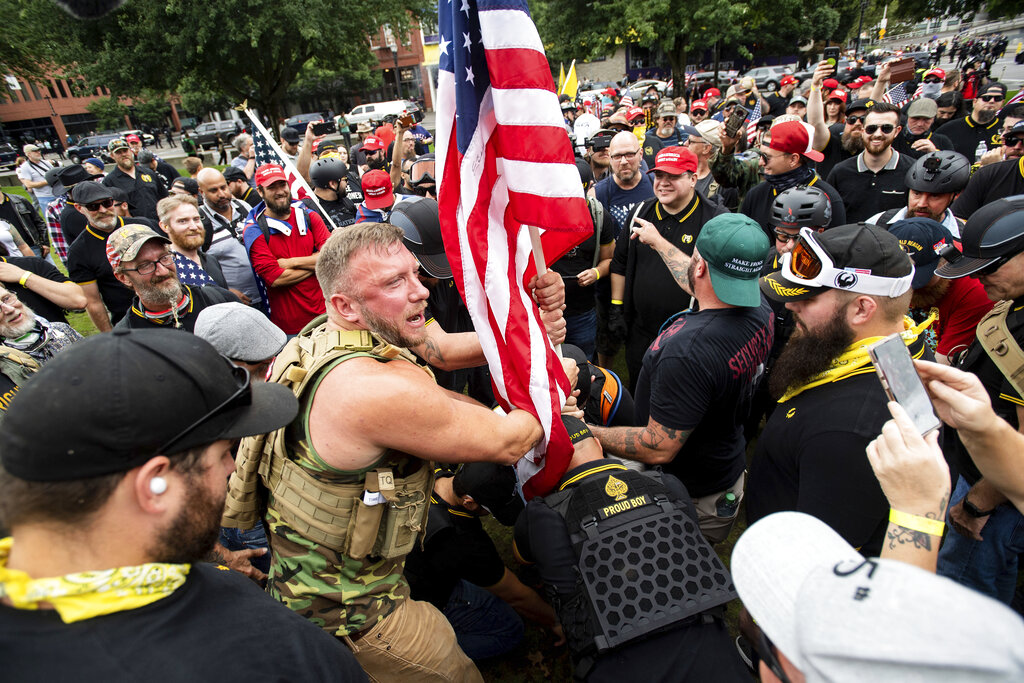 (Photo: Joseph Oakman and fellow Proud Boys plant a flag in Tom McCall Waterfront Park during an "End Domestic Terrorism" rally in Portland, Ore., on Saturday, Aug. 17, 2019. Portland Mayor Ted Wheeler said the situation was "potentially dangerous and volatile" but as of early afternoon most of the right-wing groups had left the area via a downtown bridge and police used officers on bikes and in riot gear to keep black clad, helmet and mask-wearing anti-fascist protesters — known as antifa — from following them. (AP Photo/Noah Berger))

Joe Biggs, the organizer of the right-wing gathering, said it was a success.

"Go look at President Trump's Twitter," he told The Oregonian/OregonLive. "He talked about Portland, said he's watching antifa. That's all we wanted,"

At the evening news conference Portland's mayor said Biggs was not welcome. "We do not want him here in my city. Period," Wheeler said.

Wheeler tied the demonstrations to "a rising white nationalist movement" and a growing sense of fear in the country.

"We're certainly seeing that play out," he said. "Portland being a very progressive community is always going to be at or near ground zero of this battle."

The events began late Saturday morning. Flag-waving members of the Proud Boys, Three Percenters militia group and others gathered downtown, some wearing body armor and helmets like the antifa protesters. Police said they had seized the weapons, including shields, from multiple groups as they assembled along the Willamette River, which runs through the city.

More than two dozen local, state and federal law enforcement agencies, including the FBI, were in the city for the right-wing rally. Portland Police said all of the city's 1,000 officers would be on duty for the gathering that was hyped on social media and elsewhere for weeks. 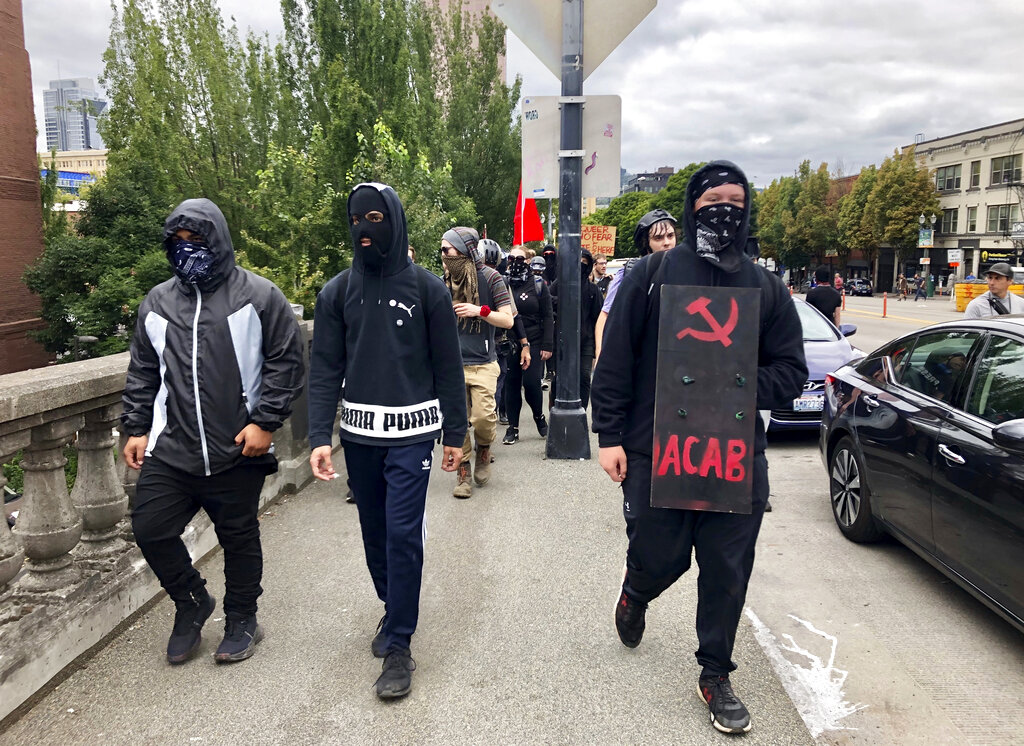 (Photo: Anti-fascist counter-demonstrators cross the Burnside Bridge across the Willamette River from the west side of the city to the east side in search of the far-right group, the Proud Boys, in Portland, Ore., Saturday, Aug. 17, 2019. Self-described anti-fascists vowed to confront the rally while leaders from the far right urged their followers to turn out in large numbers to protest the arrests of multiple members of right-wing groups in the run-up to the event. Antifa members often cover their faces with masks, making it harder to identify them. (AP Photo/Gillian Flaccus))

As of early afternoon, most of the right-wing groups had left the area via a downtown bridge. Police used officers on bikes and in riot gear to keep black-clad, mask-wearing anti-fascist protesters from following them.

But hundreds of people remained downtown and on nearby streets, and there were skirmishes throughout the day. Police declared a gathering of mostly left-wing protesters near Pioneer Courthouse Square a "civil disturbance" and told people to leave.

Police spokeswoman Lt. Tina Jones at one point said there were about 1,200 on the streets, but that number fell throughout the day.

The self-described anti-fascists had vowed to confront the right-wing rally, while leaders from the far right urged their followers to turn out in large numbers to protest the arrests of six members of right-wing groups in the run-up to the event.

Patriot Prayer's Joey Gibson, who organized similar rallies in 2017 and 2018 that erupted in clashes, surrendered Friday on an arrest warrant for felony rioting. He was at a confrontation that broke out on May 1 outside a bar where antifa members had gathered after a May Day demonstration.

In a video he livestreamed on Facebook, Gibson accused the police of playing politics by arresting him but not the masked demonstrators who beat up conservative blogger Andy Ngo at a June 29 rally that drew national attention. 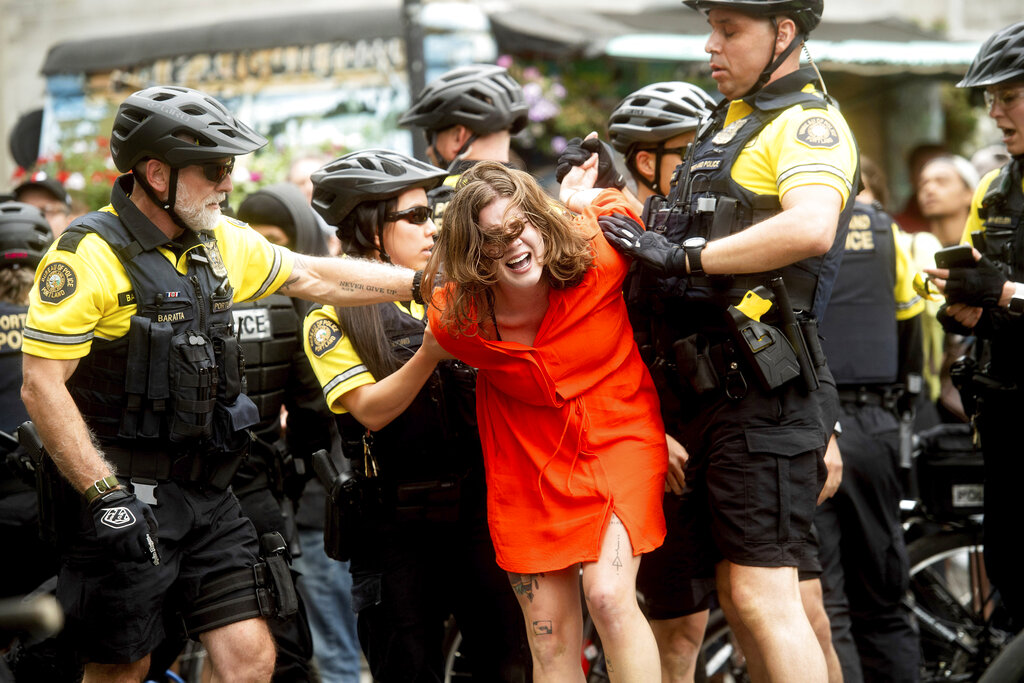 A video of that attack went viral and led the Proud Boys, who have been designated a hate group by the Southern Poverty Law Center, to organize Saturday's event.

Police continue to investigate several incidents from clashes on May 1 and June 29 and are politically neutral, Jones said.

Authorities had asked residents not to call 911 Saturday unless it's a life-threatening emergency and to stay away from the heart of downtown.

"Today was a long and arduous day," Outlaw said at the news conference. "The disruptions were held to a very small area of downtown Portland."