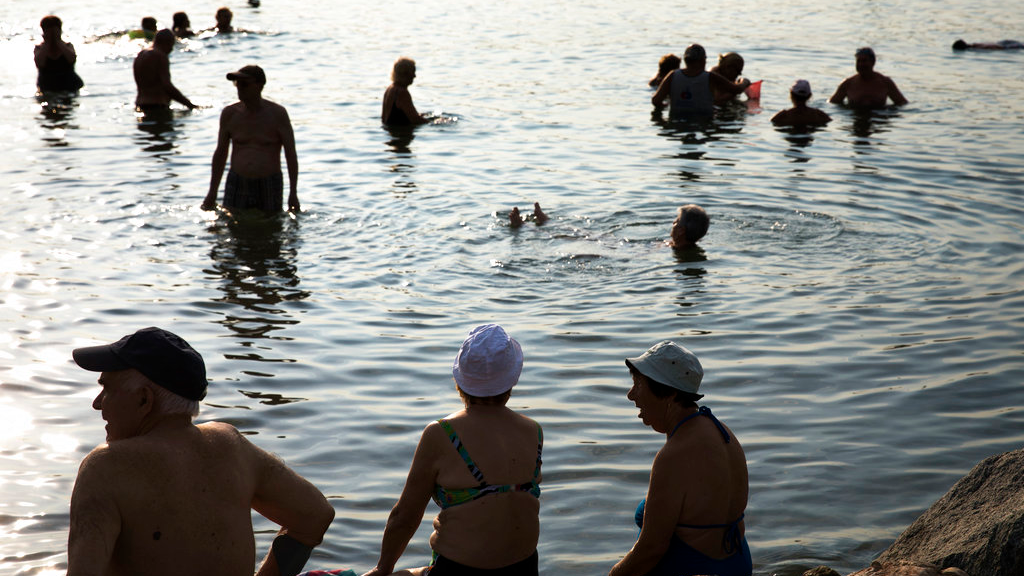 People refresh themselves on the beach during a hot summer day in Barcelona, Spain, Friday, Aug. 3, 2018. Hot air from Africa is bringing a heat wave to Europe, prompting health warnings about Sahara Desert dust and exceptionally high temperatures that could peak at 47 degrees Celsius (117 Fahrenheit) in Spain and Portugal. (AP Photo/Emilio Morenatti)

Eight places in the center, south and east of Portugal have broken their local temperature records amid a wave of heat that is predicted to rise still further, the country's weather agency says.

The highest temperature recorded Thursday was 45.2 degrees Celsius (113.4 Fahrenheit) near Abrantes, a town 150 kilometres (93 miles) northeast of the capital, Lisbon, the IPMA said.

Temperatures in Portugal were forecast to keep building nationwide on Friday, to around 45 degrees, and to peak at 47 degrees in some places on Saturday.

Portugal's highest recorded temperature was 47.4 degrees (117.3 Fahrenheit) in 2003. Emergency services have issued a red alert, placing extra services such as medical staff and firefighters on standby through Sunday.

In Portugal's southern Alentejo province, streets were largely deserted and some farmers chose to work during the night. Beaches around Lisbon, meanwhile, were packed.

Temperatures were being driven higher across the Iberian peninsula by a hot air mass moving northward from Africa, which is also bringing dust from the Sahara Desert, meteorologists said. The dust gave the sky a dark yellow hue in some places.

In Spain, heat warnings were also issued for 41 of the country's 50 provinces as temperatures were expected to reach up to 44 degrees Celsius.

Summer temperatures close to 40 degrees Celsius are not unusual in southern parts of the Iberian peninsula.

In northern Europe, Sweden was still under threat from wildfires, which in recent weeks have extended into the Arctic Circle.

Sweden's Civil Contingencies Agency warned of "a high risk" for wildfires in central and southern Sweden this weekend because of the continuing dry weather and strong winds.

An unusually long, torrid summer in Britain, meanwhile, has taken its toll on the country's flowers. Supermarket chain Morrisons has begun selling "wonky" flowers that have not developed properly.

The U.K.'s Met Office weather service says July was the country's third-warmest in more than a century. The hot weather is continuing, with temperatures forecast to reach 30 degrees Celsius in southern Britain on Friday.