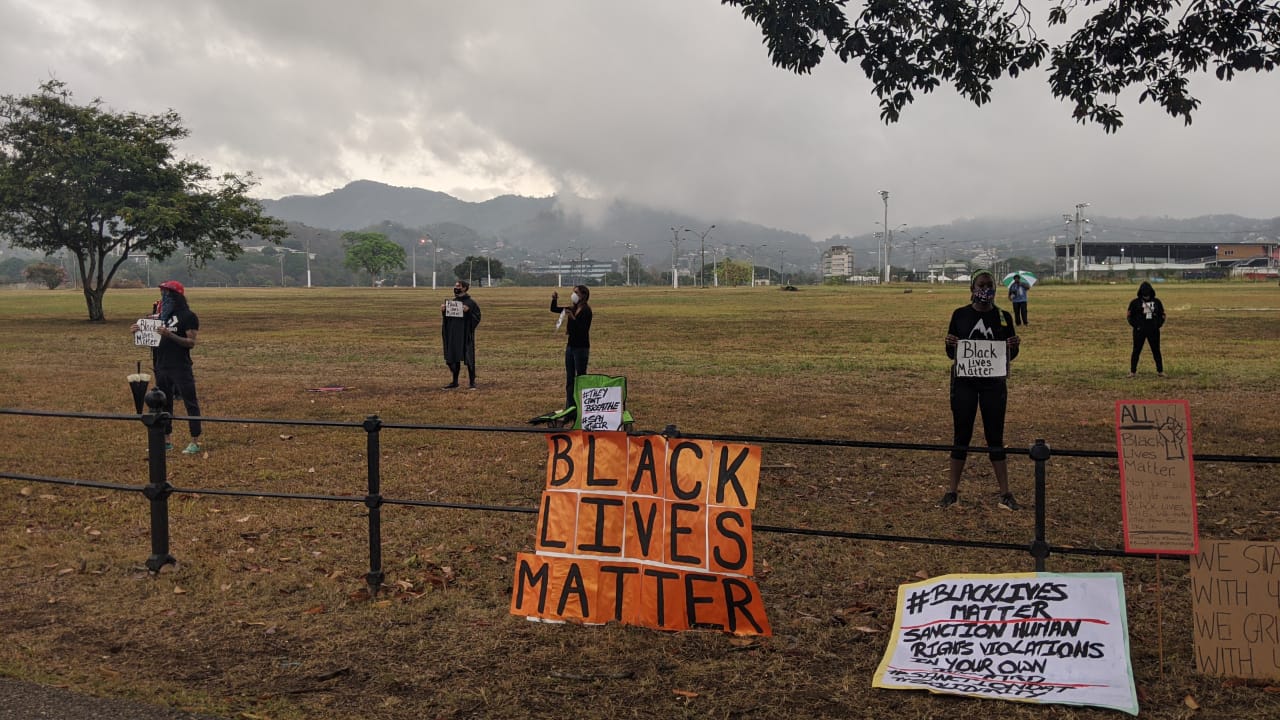 Despite the threat of flooding due to an orange level weather alert, a small demonstration to bring awareness to the Black Lives Matter movement in Trinidad went on as planned.

Even with rain clouds looming behind, the group scattered themselves, properly physically distanced just opposite the US Embassy on the Queens Park Savannah just after 1pm.

Organiser and activist, Abeo Jackson said she thought it necessary to show support despite the cause not being a local one.

Calling it a peaceful, silent and in-solidarity protest, Jackson says Trinidad and Tobago has an opportunity to become more aware of the things that have held us back as well.

“We too have our own issues that we need to deconstruct and unpick in terms of our own colonial legacies and our own dysfunctions that we need to start having conversations about in Trinidad and Tobago,” she relayed.

Jackson added that there’s much more that needs to be done, both locally and internationally. She says she was heartened to know that despite intending to come alone, others who felt strongly about the message decided to join in.

Even with support, Jackson weighed in on remarks made by business owners and other personalities who seemed to support the opposing All Lives Matter mantra. She says it’s important that, in the face of capitalism, citizens understand their influence and their purchasing power.

“I think we have to go through that process in order for us to start to have constructive conversations about what it means to be privileged and what it means to have institutional power, which is what you need to start unpicking some of the injustices of this nature and injustice right here in Trinidad and Tobago.

The demonstration is Trinidad and Tobago’s second in support of the ongoing protests in the United States which erupted last week. The Black Lives Matter movement and other supporting bodies have continued protesting against social injustices, including police brutality toward the Black community in the United States.

Most recently, protests erupted after police killed an unarmed Black man named George Floyd in Minnesota. Four police officers have since been fired and charged for various crimes relating to the incident.

Report: 3 more officers to be charged in George Floyd's death