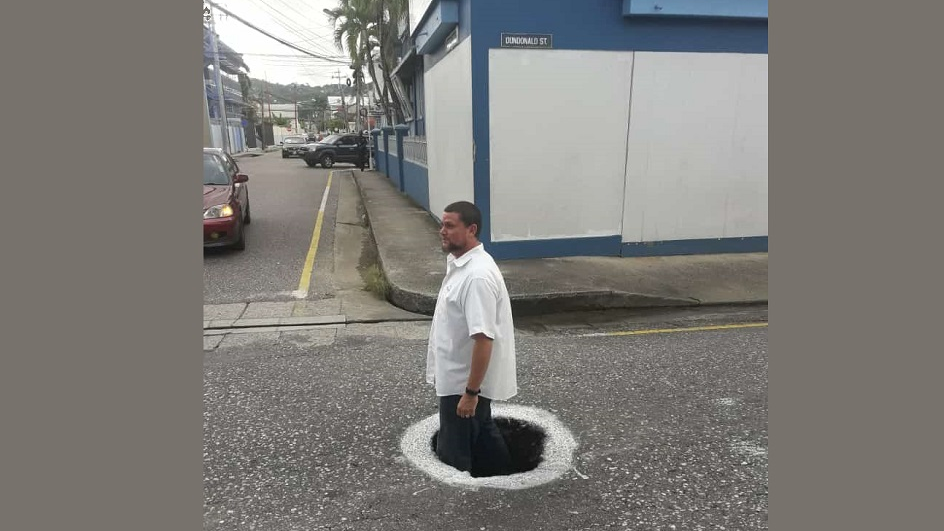 Photo shared by Mark Wilson shows a pothole on Dundonald Street, Port of Spain, which was allegedly causing damage to cars. The Port of Spain City Corporation said it has filled and highlighted the hole with white paint to warn drivers.

Port of Spain City Corporation said a troublesome pothole which has been allegedly causing damage to cars in Port of Spain has been filled and has been highlighted with white paint to help drivers in future.

Photos of the pothole were shared online earlier this week showing that the hole was so deep a man was able to stand knee-deep in it.

However the Corporation said in an update on Friday that, through its Works Division, the sinkhole has been investigated and filled for citizens' safety. The Corporation added that more works will be carried out in the near future to repair the hold properly.

"The Port of Spain City Corporation through its Works Division has investigated the sinkhole on Dundonald Street. For citizens’ safety, they have marked the hole with white paint and filled it with crush and stone as a temporary measure."

The Corporation said vehicles can pass at this time however citizens are advised to proceed with caution as this temporary fix can sink due to the constant passing of vehicles.

"The POSCC continues to monitor the situation and will refill as necessary. They are seeking to do further works over the weekend to have this matter rectified in a timely manner. We apologize for any inconvenience caused at this time and do hope to conduct works for a permanent solution to this problem as soon as possible," the Corporation said.

Recently, a viral video showing a Gasparillo man who appeared to be taking a bath in a deep water-filled pothole went viral and led to it being repaired in just three hours.