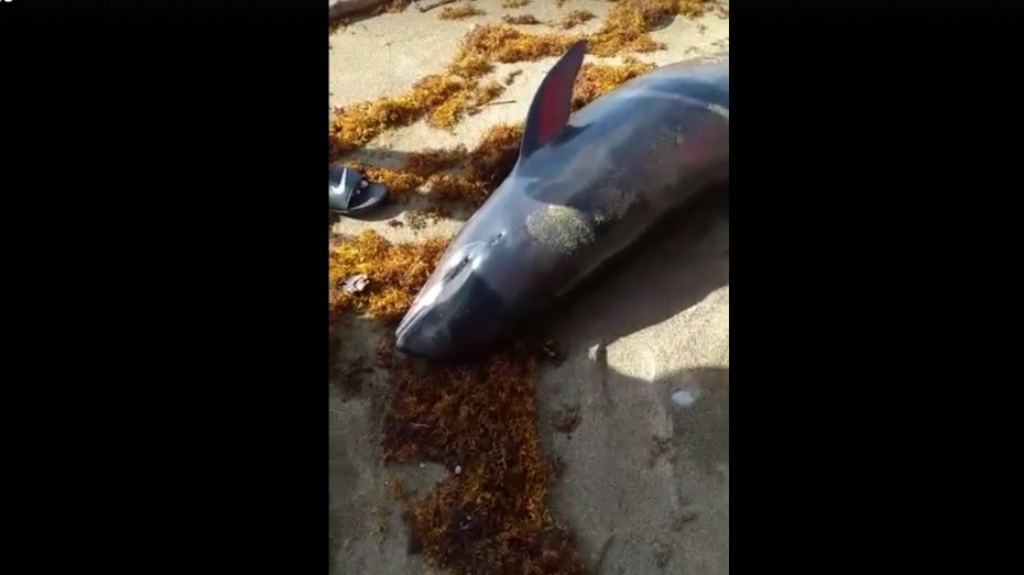 A necropsy done on Tuesday revealed that a Melon-Headed Whale which was found beached in Tobago was pregnant.

The Tobago Emergency Management Agency (TEMA) said in a social media post that officials were investigating the incident.

“A whale has been found stranded at Princess Bay Argyle, (just behind Pablo Supermarket).”

“At approximately 8.55 a.m. several persons reported it to the TEMA Emergency Operations Centre.”

“Officials from the Division of Food Production, Forestry and Fisheries are currently on the scene while officials from the Marine Mammal Response Team have been mobilized,” the agency said.

Wildlife biologist, Angela Ramsey told Loop News that the whale had already died by the time the team got to the site, however they were told that it had been seen close to shore since Monday.

She said the Melon-Headed Whale had been pregnant, and the baby was almost at full term.

"It was already dead when we got the report, it could have been dead for a few hours. There were reports that it was seen in the area the day before, near the shore."

She said a necropsy was done on-site and the whale had no external signs of trauma, so the cause of death might have been due to starvation and stress.

"We did a necropsy on site and it was a young pregnant female, apparently it hadn’t eaten for maybe eight hours or so, and probably this combined with the stress of pregnancy may have had an impact."

Ramsey said it was unfortunate that they had not received a report sooner, as they might have been able to guide the whale back out to sea.

"If we had gotten the report yesterday when she was seen close to shore - sometimes they follow fishermen to get food - we would have tried to lead it back out to sea," she said.

She said these types of incidents do tend to take place around the island with approximately three reports received per year of whale strandings.

There are numerous factors which could cause whale strandings, however one of these is the proliferation of sargassum seaweed, she added.

"There are a lot of factors, one of them is seaweed in which animals could become tangled...we tend to get a lot of strandings around this time," she said.

She said Melon-Headed Whales are also sensitive to sounds, and studies have shown that whales are negatively impacted by mid-frequency active sonar.

What causes whales to beach themselves?

Whales and dolphins have been known to sometimes become beached, that is, stranding themselves on land, usually a beach.

Beached whales often die due to dehydration, collapsing under their own weight, or drowning when high tide covers the blowhole.

Several explanations for why cetaceans strand themselves have been proposed, but none have so far been universally accepted as a definitive reason for the behaviour.

A link between the mass beaching of beaked whales and use of mid-frequency active sonar, however, has been found.

According to LiveScience, a 2001 study conducted by the Bahamas Marine Animals Research Organization found a correlation between mass strandings of beak nose whales in the northern Bahamas and naval sonar manoeuvres in the area.

The largest reported stranding of a single whale species occurred in 1946, when 835 false killer whales stranded themselves near the city of Mar del Plata in Argentina, according to the "Encyclopedia of Marine Mammals" (Academic Press, 2009).

The cause of the massive beaching was never determined.