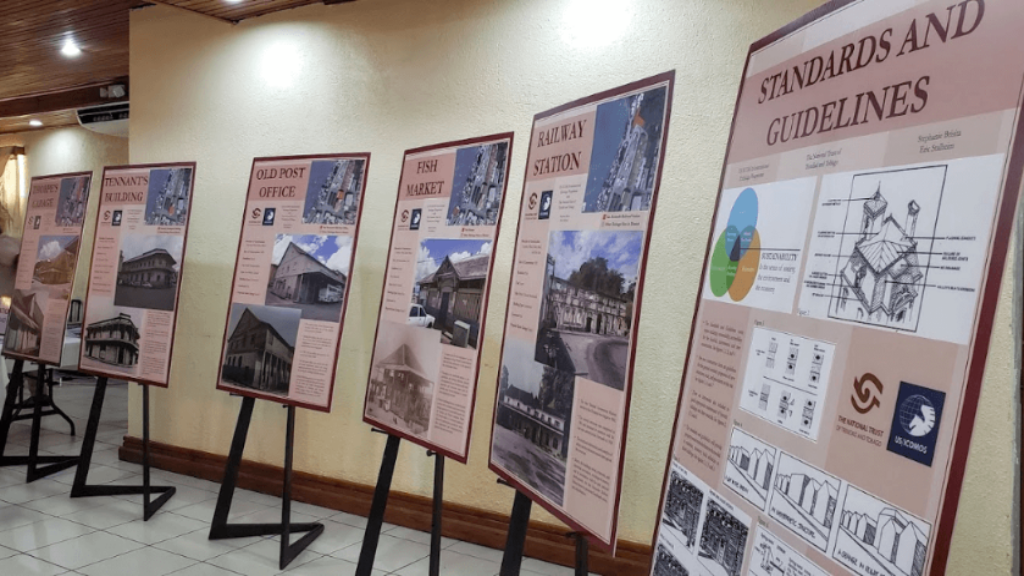 With 41 heritage sites to be listed soon, a call is being made to the private sector to get involved in preserving the country’s history.

Speaking with reporters at the launch of the Plaza San Carlos Heritage District, National Trust Chairman Margaret McDowall-Thompson urged property owners to get on board with restoration and preservation of existing buildings.

The Heritage District comprises six sites at King’s Wharf, San Fernando, many of which were have been standing since the 1800s at the height of the sugar industry.

Over the past two months, US/ICOMOS interns Stephanie Brisita and Eric Stalheim have put together dossiers on the heritage sites (Tennant’s Building/Rodriguez Building, Old Thorpe’s Garage, Happy Corner, Fish Market, General Stores and the Old Post Office), including a set of standards and guidelines for these sites and their immediate surroundings and a framework for managing and regulating heritage districts.

The interns presented their research on the heritage sites to a packed auditorium at the San Fernando City Hall.

Weighing in on the importance of heritage preservation, McDowall-Thompson said it was cheaper to restore a building than it was to demolish it and erect another structure in its place.

“What we have realised is that restoration is less expensive than breaking it down and building something new. People just don’t understand that.”

She noted that restoration also has business value, creating jobs for artisans in the process.

The National Trust Chairman also issued a call to Government for fiscal incentives to attract the support of the private sector in this endeavour as she said it would assist the Trust in their challenges with listing privately owned sites.

She suggested incentives such as tax savings and property tax reduction as a means of attracting this investment.

McDowall-Thompson explained there were several stages involved in the process of listing sites on the her­itage as­set reg­is­trar, where sites must first be iden­ti­fied, then researched, investigated, and, in some cases, acquired.

When a decision is taken to list a heritage site, it must be Gazetted, the owner must be informed of Intention to list as a Heritage Site and it must be published in at least three issues of a daily newspaper.

A site listed on the Index of Listings at the Registrar General is protected under the National Trust of Trinidad and Tobago Act 1991.

In terms of ownership and acquisition, the Mayor expressed his hope that operators of the various buildings would not be opportunistic when it came to negotiations. He urged them to put San Fernando first in this regard.

“These are historical sites of great value. At the same time, there must be a balance, an equilibrium between the sites and where there is fairness.”

Lauding the efforts of the interns over the past two months, Regrello said this exercise has provided the relevant agencies with valuable recommendations from a technical perspective.

He suggested that more sites be added to the Heritage District, including the San Fernando Police Station, the Carnegie Free Library, the Old Carib House on Carib Street and the San Fernando City Hall.

Many of the buildings listed are in good condition and have retained their unique architectural features from their original construction.

For instance, General Stores, constructed in the 1870s, is the only structure in the area and one of just a handful left in T&T which has a mansard roof, indicative of its early construction date. The structure is also the only one in the proposed heritage district that has its original wood timber ceiling and interior floor structure and flooring.

The National Trust is tasked with the preservation of built and natural heritage.

Among their objectives is the protection and promotion of the care and preservation of significant examples of Trinidad and Tobago’s built and natural heritage, as well as foster a greater awareness and understanding the country’s heritage and of its significance and richness, and to promote access for all citizens to their heritage.

The sites due to be listed do not include the six heritage buildings which are part of the Heritage District at Kings Wharf.

During their time in T&T, the US /ICOMOS interns assessed the historical value of the buildings in the District and well as the history, significance and architectural features for each site.

They have also created a proposal for guidelines and standards for the heritage district, the second of its kind in T&T. The Woodford Square Heritage District was the first to be established.