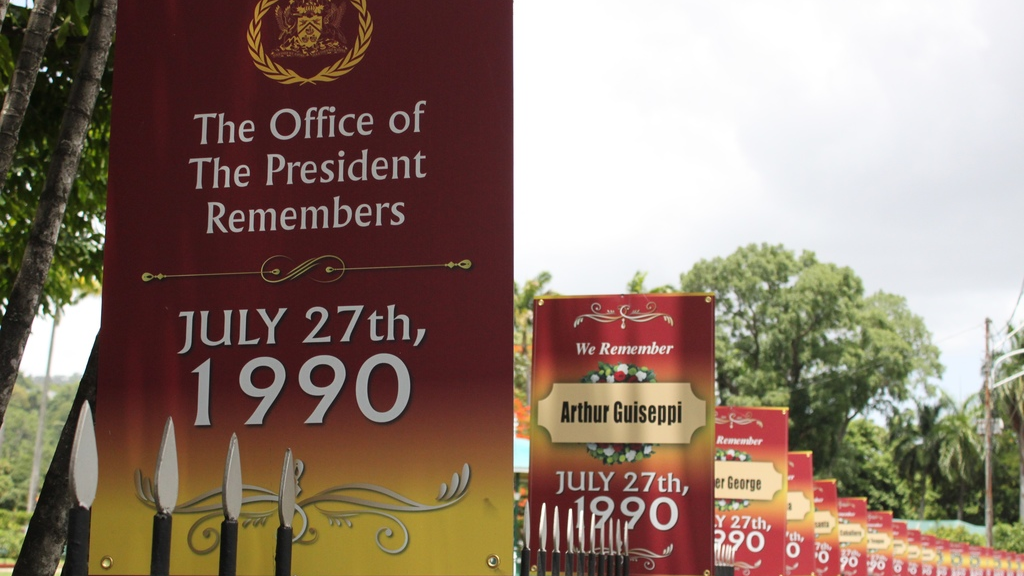 The Office of the President remembers those who lost their lives in the 1990 coup with these banners.

President Paula Mae Weekes is lamenting the fact that some victims of the attempted coup remain nameless and faceless.

In a release issued on the 29th anniversary of the coup today, the President said this is a testimony to our short memories and disregard for human life and dignity.

"Twenty-four people were dead, over 200 were injured and millions of dollars in property damage had been incurred in and around the capital city. Despite the great and lasting impact of those six days of terror, all the names of those who perished are not readily available.

"We are able to identify, Mr. Leo des Vignes, Member of Parliament for Diego Martin Central; SRP Solomon McLeod; ASP Roger George; Estate Constable Malcolm Basanta; George Francis; Arthur Guiseppi; Helen Lavia; Lorraine Caballero and Mervyn Teague as being among the 24 citizens who lost their lives in the most brazen assault on our democracy in history," she said.

The President said by allowing victims of the violence to go unrecognised by the nation, we chance diminishing the weight of the impact of the attempted coup on society and risk becoming immune to brutality in all its forms.

"Every citizen should be concerned that for such a significant event, there is no official commemoration nor is there an official list of all the casualties.  The Office of the President has searched widely but in vain," she said in a release.

The President said to this day, many survivors of the attempted coup suffer physically and mentally from their experiences during and following the insurrection.

"Today we recognise the wounded, the bereaved and those who suffered financial loss. We remember also the unsung heroes—the emergency services, many of whom worked long hours without relief; the protective services and mediators who worked tirelessly to end the siege; and the journalists who risked life and limb to update the nation as events unfolded.

"July 27 is an opportunity for us all to recommit to our respect for human rights and dignity and to the democratic principles which underpin our nation. The bloodshed, fear, and misery of those six dark days, thus far unmatched in the history of the nation, should remain at the forefront of our collective memory to ensure that such an attack never again occurs," she said.