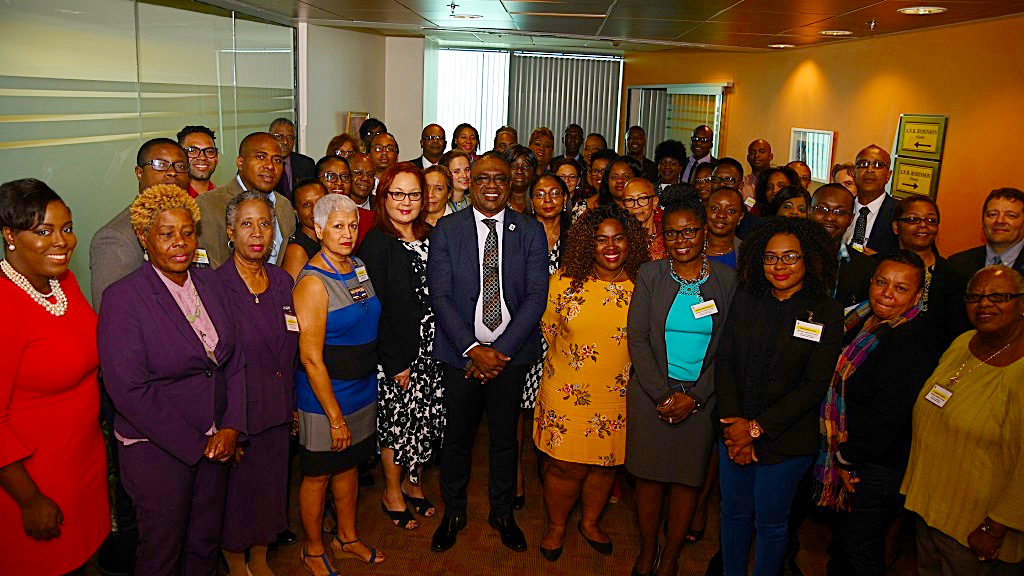 Photo: Director of PANCAP, Mr. Dereck Springer and Professor Rose-Marie Belle Antoine with participants of the Regional Forum on Migrants and Mobile Populations Rights and Health.

Professor Rose-Marie Belle Antoine called for a pragmatic approach regarding the access to health care for migrants and refugees, saying this is important for the overall health response to HIV/AIDS in the Caribbean.

Speaking at a Regional Forum on Migrants and Mobile Populations Rights and Health held by the Pan-Caribbean Partnership against HIV and AIDS (PANCAP) on June 26, Professor Antoine, Dean of the Faculty of Law at The University of The West Indies, St. Augustine, said there is no doubt that the HIV prevention agenda has experienced a significant lull, but it seems that now that the region has been re-energised.

She said in all of the studies and the policy framework developed, there were two clear universal principles for addressing HIV and migrant populations in the region:

"There must be a commitment to a human rights framework that places a premium on civil and political fundamental rights of the dignity of the individual and equality."

"There must be a pragmatic approach to the right to health and to rights in general, recognizing that a non-discriminatory strategy for public health benefits the entire population. Put simply having undocumented persons in our communities without access to HIV testing and treatment endangers not just them, but all of us."

"Given that the legal framework supporting access to HIV services for migrants is generally weak in the countries under study, in my capacity as the Regional Consultant, I framed some human rights principles to facilitate the objectives of the project," she said.

Professor Antoine said these principles were supported by the Component 1 group in November 2011 as the principles to be used as the basis for the development of the national policy guidelines and are as follows:

The principle that all persons, including migrants and mobile populations, should be able to access a minimum standard of medical treatment for HIV, may be located under a number of internationally recognized human rights principles. These include:

"Every person has a right to health, an economic and cultural right which is derived from the broader right to life. While it is recognized that states have a margin of appreciation or leeway in determining how to translate this right in dollars and cents terms, at minimum, a state should do all in its power to ensure the health of those persons within its jurisdiction, especially in situations where its citizens and general population may be placed at risk because of related health issues."

"Every person has a right to life and to protection of his or her life. In recent times, international human rights law has recognized that this extends to a state protecting the life of non-resident ‘aliens’ and other non-citizens where their lives are threatened because of a lack of, or hindered access to HIV treatment. We see this, for example, in recent asylum cases. This principle is broad enough to encompass migrants and mobile populations. Indeed, their standing before the law is greater than persons who come to a country to seek asylum."

"The principle of equality and non-discrimination is accepted as a fundamental principle of international and domestic human rights law. While constitutions may make exceptions in certain circumstances with regard to citizens, where a person resides in a state, pays taxes and contributes to a national health insurance scheme, there is no legitimate basis to apply this exception and the principle of equality in its absolute sense must stand. As such, every migrant person who contributes to taxes and national insurance should have EQUAL access to HIV treatment," she said.

Several international instruments contain the principles of universal access to HIV care and treatment. These include the International Covenant on Economic, Social and Cultural rights, the International Convention on the Protection of the Rights of all Migrant Workers, the WHO Resolution on Health of Migrants and the Political Declaration on HIV and AIDS (UNGA Declaration).

"The principles contained in these Agreements should serve as guiding principles for domestic legislation and policy. This universal access of care for all must specifically include migrant and vulnerable migrant women and children," she said.

Referring to the second universal principle, Professor Antoine emphasized that there must be a pragmatic approach to the right to health and to rights in general and reiterated that a non-discriminatory strategy for public health benefits the entire population.

“Thinking of the dollars and cents necessary to bring about a broad, non-discriminatory route to public health as an obstacle is counterproductive. We can save in the short term, but we all lost out in the long term," she said.

Professor Antoine also addressed access to health services by migrant sex workers.  She stated that the region continues to have challenges in terms of discriminatory, harmful policies against sex work. She advocated for an end to judging sex workers and called for the region to confront the issue head on and provide a safe route to testing, education and treatment.

She stated, “Consider modifications to criminal laws on sex work, at least to provide mechanisms for legal treatment where HIV is present, if not to decriminalize such conduct. Such a policy must make special provision for undocumented migrants who are sex workers, such as amnesty for such persons and a ‘no questions asked’ policy, clearly advertised in a reassuring way.  These are not necessarily legal amendments but are ancillary to legal policies and laws”.

Professor Antoine concluded that the greatest task in moving forward in relation to improving access to HIV treatment for the migrant population is the tool of political persuasion.

She challenged the participants to use all of their moral, intellectual, scientific and medical resources to persuade the political powerbrokers that it is in the interest of the region to provide access to treatment for all migrants and that future policy changes in health should not change this.

She further stated that a Pragmatic Approach should be utilized to convince officials that the region must provide migrants with HIV prevention and treatment access in order to protect the general population.

“A rights-based framework is needed now, more than ever before," she said.

PANCAP Director Dereck Springer said the Migrants Forum builds on the programmes and interventions that PANCAP, with funding from development partners, have been supporting national governments and civil society to implement and address the needs of migrants and mobile populations.

He referred to the PANCAP-GIZ-EPOS Migrant Project, which worked to improve inclusion of migrants on regional and national HIV Bodies in order to advocate for equal access to health care in Antigua and Barbuda, the Dominican Republic, Haiti, Guyana, Suriname, Sint Maarten and the Republic of Trinidad and Tobago.

Springer said under the PANCAP Global Fund Round 9 Project, in collaboration with ILO Decent Work Programme Office, efforts were made to integrate migrant-specific interventions into the national HIV response in Antigua and Barbuda, Barbados, Belize and Trinidad and Tobago.

Key population-specific interventions targeting MSM, sex workers, miners and loggers have been implemented under the Global Fund project in Guyana.   Jamaica, Belize, Suriname and Haiti have also implemented Global Fund-funded projects for key populations. However, the Director informed that these interventions typically cease with the end of external funding support.

Aurora Noguera Ramkissoon, UNFPA Caribbean Liaison Officer delivered remarks on behalf of Dawn Foderingham, Fast Track Adviser and Team Leader for the UNAIDS Caribbean Sub-regional Team.  Her remarks focused on the state of migrants accessing health in the region.  She explained that the region has been shaped by the forces of migration, which has resulted in opportunities and challenges.

Foderingham’s said migrant populations must be defined as a vulnerable and key population.

She said migrants and mobile populations are exposed to a unique set of factors and complex obstacles that make them more vulnerable to HIV, including limited access to health services and information, as well as exposure to situations that may increase high-risk sexual behaviour.

She proposed that to meet the universal health coverage targets set by the Sustainable Development Goals, it is crucial that the rights of migrants to access health services—including HIV services—be urgently addressed.

She emphasized that the right to health is universal, and in so doing UNAIDS commends PANCAP on leading the discussion and planned action on this issue, with the intent of developing a regional framework that promotes appropriate access to HIV services of migrants.

Foderingham said she was hopeful that in developing this framework and advocating with COHSOD for its ratification, that the vulnerable population of migrants will have their right to health respected and upheld.

“In the Caribbean we say that if your neighbor’s house is on fire, you should wet your own. I urge us all to work diligently over the next two days to create a framework that would ensure a human rights-based, sustainable and feasible approach to ensuring migrant and mobile populations have healthcare access, including HIV prevention, treatment, care and support."

PANCAP commissioned research into the vulnerabilities of migrants in four Caribbean countries in 2012: Antigua and Barbuda, Barbados, Belize and the Republic of Trinidad and Tobago. These studies fed into efforts to integrate migrant-specific approaches into the work of national HIV programmes. At the end of the Project, migrant workers had access to HIV prevention services including education and testing for HIV in the beneficiary countries.

The PANCAP-GIZ Migrant Project worked in Antigua and Barbuda, Dominican Republic, Guyana, Haiti, Sint Maarten, Suriname and the Republic of Trinidad and Tobago. Each of the GIZ countries has developed a plan for migrants that is intended to sustain the interventions initiated under the GIZ project.

The GIZ Migrant Project worked to improve inclusion of migrants on regional and national HIV Bodies in order to advocate for equal access to health care. This was achieved as follows: Guyana (2 NGOs), DR (2 NGOs), Suriname (1 TWG–HIV + Migrant/MoH), Antigua (1 NGO 3 H Foundation),1 NGO (Caribbean Vulnerable Coalition Trainings to empower migrants and their representatives are conducted in: Antigua, the Dominican Republic, Guyana, Suriname, and Trinidad and Tobago).

The participation of migrant representatives on the Country Coordinating Mechanism (CCM) in Suriname enabled the inclusion of vulnerable migrants as a key population in its Global Fund grant and the founding of a non-governmental organization for migrants.

Comprehensive HIV prevention programmes to support reduction in the spread of HIV that facilitate linkages to the continuum of care and serve as a catalyst for reducing stigma, are lacking in the majority of countries.

Many countries do not have targeted programmes for key populations and lack the capacity to develop and implement key populations-specific programming along the prevention, diagnosis, treatment and care continuum.

Under the PANCAP Round 9 Global Fund project, efforts were made to integrate migrant-specific interventions into the national HIV response in Antigua and Barbuda, Barbados, Belize and Trinidad and Tobago.

PANCAP is a Caribbean regional partnership of governments, regional civil society organisations, regional institutions and organisations, bilateral and multilateral agencies and contributing donor partners which was established on 14 February 2001.

PANCAP provides a structured and unified approach to the Caribbean’s response to the HIV epidemic, coordinates the response through the Caribbean Regional Strategic Framework on HIV and AIDS to maximise efficient use of resources and increase impact, mobilises resources and build capacity of partners.

What are the Joint United Nations Programme on HIV and AIDS (UNAIDS) 90-90-90 Targets?

- By 2020, 90% of all people with diagnosed HIV infection will receive sustained antiretroviral therapy.

- By 2020, 90% of all people receiving antiretroviral therapy will have viral suppression.