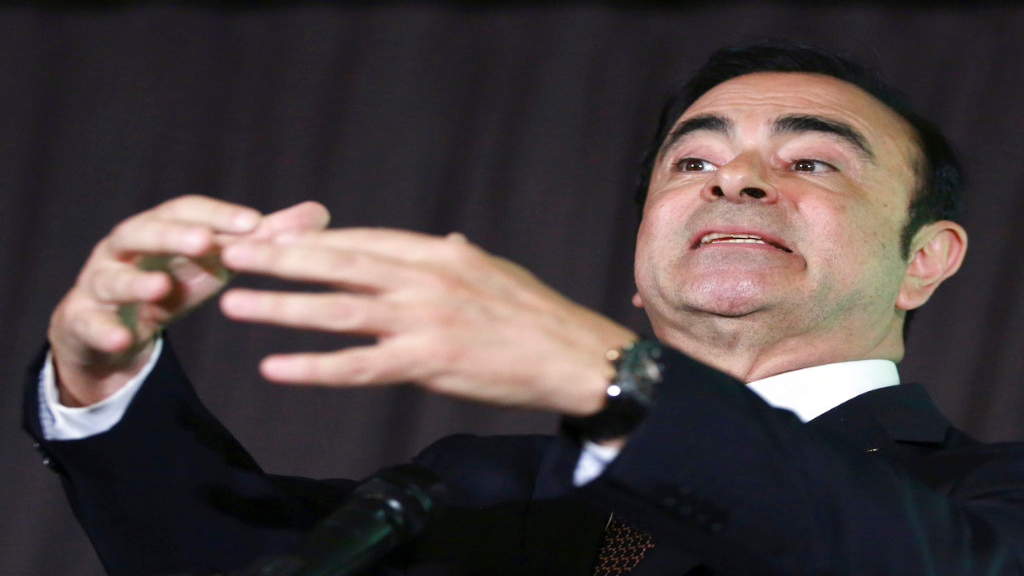 Prosecutors have charged Nissan Motor Co.'s former chairman Carlos Ghosn, another executive and the automaker itself for allegedly underreporting income.

The charges imposed Monday involve allegations Ghosn's pay was underreported by about 5 billion yen ($44 million) in 2011-2015. The prosecutors said earlier that the allegations were the reason for Ghosn's arrest on Nov. 19.

The arrest of an industry icon admired both in Japan and around the world has stunned many and raised concerns over the Japanese automaker and the future of its alliance with Renault SA of France.

The prosecutors issued statements Monday outlining new allegations against Ghosn and Greg Kelly, the other executive. Those are of underreporting another 4 billion yen ($36 million) in 2016-2018. Nissan as a company was not mentioned in the latest allegations, which did not give details about the income thought to have been underreported.

In Japan, a company can be charged with wrongdoing. A court date is still undecided as the prosecutors continue to question Ghosn and Kelly.

The maximum penalty for violating Japan's financial laws, as the prosecutors allege, is 10 years in prison, a 10 million yen ($89,000) fine, or both.

Some kind of action by the prosecutors had been expected because the detention period allowed for the allegations disclosed earlier was to end on Monday.

Nissan Motor Co. confirmed the charges against it in a statement and vowed to strengthen its governance and compliance.

Kelly, 62, an American, is suspected of having collaborated with Ghosn.

Kelly's attorney in the U.S., Aubrey Harwell, told The Associated Press earlier this month that his client is asserting his innocence. He said insiders at Nissan and outside experts had said the handling of the income reporting was legal.

Ghosn has not commented.

Ghosn was ousted as Nissan chairman and Kelly lost his representative director title following their arrests. They both remain on Nissan's board pending a shareholder's meeting.

Ghosn, 64, was sent to Nissan by its partner Renault SA of France in 1999. He led a dramatic turnaround of the near-bankrupt Japanese automaker. But his star-level compensation drew attention since executives in Japan tend to be paid far less than their international counterparts.

It is typical in the Japanese legal system for there to be little access to comment by suspects. Prosecutors have also said little.

Only Ghosn's attorneys and embassy officials from Lebanon, France and Brazil, where he has citizenship, have been allowed to visit him.

Shin Kukimoto, deputy chief prosecutor at the Tokyo District Prosecutor's Office, declined Monday to say if the suspects were rejecting the allegations. He said Ghosn and Kelly were being detained because they are considered flight risks.

Japan's criminal justice system long has been criticized for detaining people for extended periods to pressure them to confess. The conviction rate for those charged is more than 99 percent.

"We do not have such a scenario. There is no such thing and we do not force suspects to make confessions to fit the story," Kukimoto said in response to a reporter's question.

Meanwhile, the Securities and Exchange Commission said it had filed criminal complaints against Ghosn, Nissan and Kelly. A commission official said Monday that Nissan, Ghosn and Kelly were suspected of falsifying reports on millions of dollars' worth of Ghosn's income.

Nissan has said that an internal investigation found three types of misconduct: underreporting income to financial authorities, using investment funds for personal gain and illicit use of company expenses.