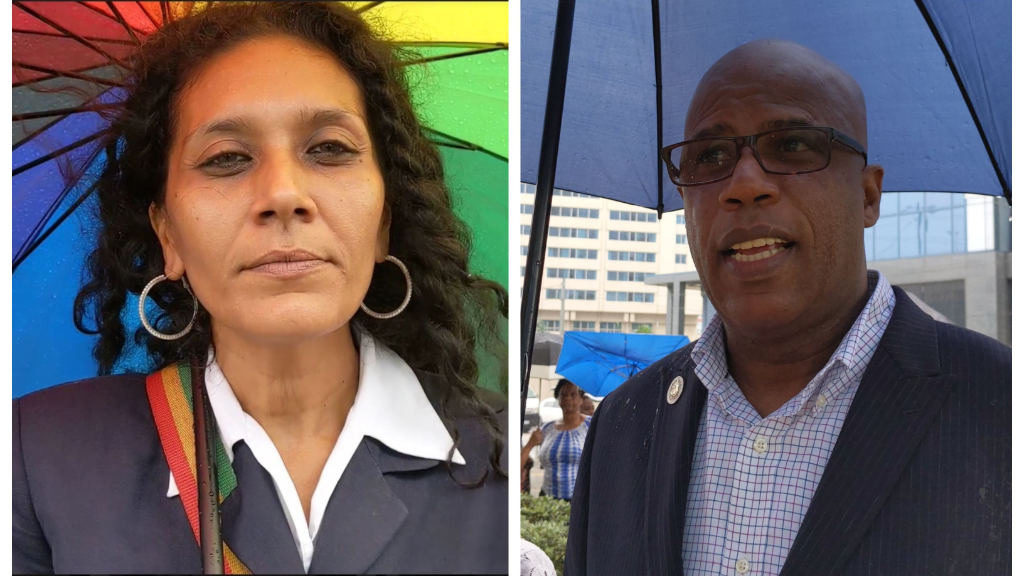 The Cannabis Control Bill is being tabled in the Parliament, but protesters both for and against the decriminalisation of marijuana gathered before the sitting to share their views.

Bishop Victor Gill, of TT Response says the government is bending to the need for ‘political correctness’. Speaking to Minister in the Ministry of National Security, Fitzgerald Hinds, outside the Parliament building, Gill chastised the move. “I see this, knowing what marijuana does, as a downhill slide. This will show poor ethics, poor leadership, leading by consensus, leading by political correctness instead of moral conviction.”

After listening intently, Hinds explained to the Bishop that while he respects his position, there are people who would benefit from the decriminalisation of marijuana. “There are those who have used it and have gotten relief from pain. There’s a medicinal value to this herb as with other herbs,” he said.

Hinds also explained that there are many who’ve been arrested and jailed for possession of small amounts of marijuana who would also benefit from having their records expunged.

He then went into the building to join the sitting.

Nazma Muller, a cannabis activist, was also outside the Parliament building. Speaking on the protesters demonstrating against the drug, she says their time has passed. “This is an issue that should be based on science and fact and not emotions. I think we’ve seen enough data and statistics over the last 50 years to see that prohibition does not work,” she explained.

She says that while legalisation of the drug should be the real goal, the current legislation is a step in the right direction.