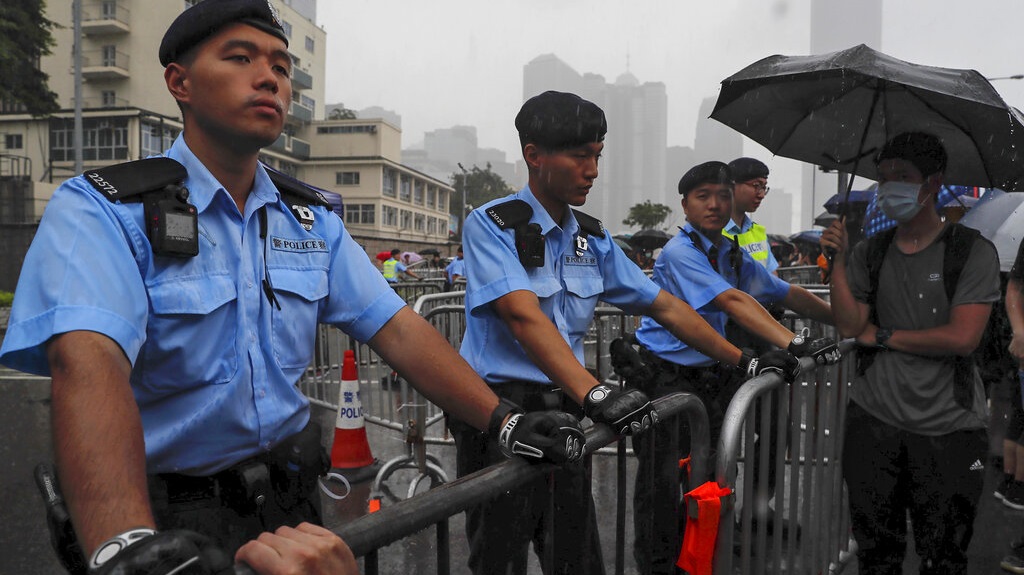 Demonstrators in Hong Kong gathered Monday outside the office of the city's leader, demanding that she step down for the crisis over a highly unpopular extradition bill that has tested the durability of China's promises to respect the former British colony's quasi-autonomy.

The mostly young protesters blocked a street near the city's waterfront as they stood outside the office of Chief Executive Carrie Lam chanting calls for her to cancel the proposed legislation.

As night fell, protest leaders debated their next steps. Some wanted to set a deadline for a meeting with Lam. Others decided to head home.

Nearly 2 million Hong Kong residents, young and old, joined a march on Sunday that lasted late into the night to express their frustrations with Lam and the extradition bill, backed by Beijing. Many stayed on afterward.

Protesters blocked some downtown roads well into Monday morning, but gradually yielded to police requests to reopen roads, moving to areas near the city's government headquarters. The protest revived after Joshua Wong, a prominent activist leader, rallied the crowd after his release from prison later Monday.

The activists have rejected apologies from Lam for her handling of the legislation, which would allow suspects to be sent to mainland China for trial. She announced that work on the bill would be suspended after large protests last week, but the legislation has touched a nerve not easily soothed in a city anxious over the increasingly authoritarian Communist rule of Chinese President Xi Jinping.

"We are very angry that Carrie Lam has not responded to the demands of all the protesters, but now is the time to talk about strategy, and talk about strategy is about how to make the whole struggle into a long-term struggle and not a day struggle, so if Carrie Lam does not respond to the demands by the protesters, people will come back and the struggle will continue," Lee Cheuk-yan, a former legislator and activist, said Monday.

The uproar over the extradition bill highlights worries that the former British colony is losing the special autonomous status China promised it when it took control in 1997.

On June 9, a week earlier, as many as 1 million people demonstrated to express their concern over Hong Kong's relations with mainland China.

The scenes are similar to those in 2014, when protesters camped for weeks in the streets to protest rules that prevented the direct election of the city's chief executive.

Wong, who was imprisoned for his role in the 2014 demonstrations and sit-ins, dubbed the "Umbrella Movement," was released from prison on Monday after serving half of a two-month sentence on a contempt charge. He soon swapped his white shirt for one that was black — the color of this year's protests — and joined the fray.

"After the end of the Umbrella Movement we claimed we would be back. Finally five years later we did it," Wong said.

"It's lucky that Beijing and Carrie Lam transformed a whole generation of youngsters from normal citizens to dissidents. That's the price that Beijing must pay," Wong said.

One concern over the extradition bill is that it might be used to send critics of Communist Party rule to the mainland to face vague political charges, possible torture and unfair trials.

It's seen as one of many steps chipping away at Hong Kong's freedoms and legal autonomy.

Lam insists the legislation is needed for Hong Kong to uphold justice, meet its international obligations and not become a magnet for fugitives. It would expand the scope of criminal suspect transfers to include Taiwan, Macau and mainland China.

So far, China has been excluded from Hong Kong's extradition agreements because of concerns over the judicial independence of its courts and its human rights record.

The vast majority of Hong Kong residents fled persecution, political chaos or famine in the Chinese mainland. They value stability and but also cherish freedoms of dissent and legal protections not allowed Chinese living across the border.

Many Hong Kong residents also were angered over the police use of tear gas, rubber bullets and other forceful measures as demonstrators broke through barricades outside the city government's headquarters during demonstrations on Wednesday, and over Lam's decision to call the clashes a riot. That worsens the potential legal consequences for those involved.

The protesters have mainly focused their ire toward Lam, who has little choice but to carry through dictates issued by Beijing. She has sidestepped questions over whether she should quit and also defended how the police dealt with last week's clashes.

Many here believe Hong Kong's legal autonomy has been significantly diminished despite Beijing's insistence that it is still honoring its promise, dubbed "one country, two systems," that the territory can retain its own social, legal and political system for 50 years after the handover from Britain in 1997.

Prosecutions of activists, detentions without trial of five Hong Kong book publishers and the illegal seizure in Hong Kong by mainland agents of at least one mainland businessman are among moves in recent years that have unnerved many in the city of 7 million.