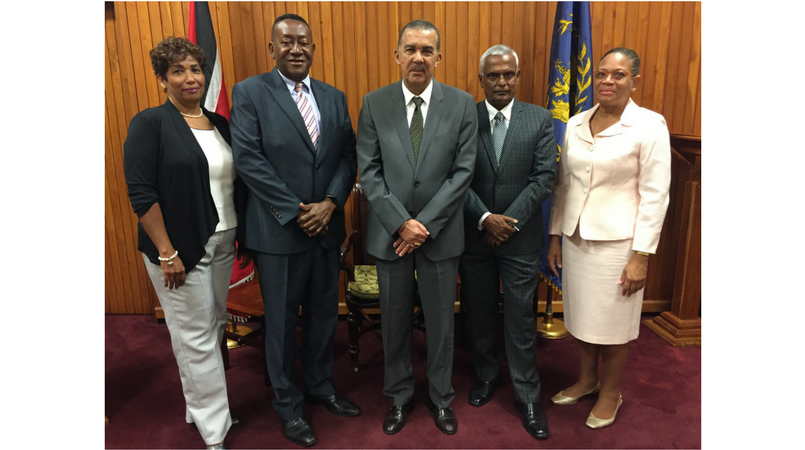 Members of the PSC

Former Chairman of the Police Service Commission (PSC) Dr. Maria Therese Gomes yesterday attempted to block PSC member Martin George from explaining how a casting vote was used to decide that a particular candidate did not require further investigation.

The Special Select Committee was set up to review the process and procedures used by the Commission in nominating two senior police officers for the top posts.

The committee heard that 54 applications were received, four of which were unsuitable.

Four people applied for the position of Commissioner of Police, 26 for Deputy Commissioner and 20 for both positions. Twelve candidates were shortlisted.

These candidates were then given the opportunity to be assessed for both positions.

The names of candidates were not revealed yesterday for confidentiality purposes.

However, PSC member Martin George was interrupted by the former PSC chairman, as he attempted to explain how a casting vote was used by a certain member as they sought to determine whether a particular candidate should be the subject of further investigation.

“The first issue as it relates to the question of a 2:2 vote related to the question as to whether a candidate ought to be the subject of further investigation. That was 2:2 vote. Two for, two against. And that’s where…” George said as he was interrupted by Gomes.

The former PSC chairman said she believed that matter should be heard in camera.

However, Chairman of the Special Select Committee Fitzgerald Hinds intervened, allowing George to continue his explanation, without any interruption.

George explained that there was a 2:2 deadlock, which then resulted in a casting vote.

He said questions were also raised of about whether the casting vote should be used.

George said internal legal counsel indicated that the legislation does allow for the use of a casting vote and as such the casting vote prevailed.

“Thereafter the question arose as to the order of merit list and the approval which then would have hinged on the previous issue of whether there ought to be an investigation in relation to a certain candidate. At that point that vote went 3:1 with that member still insisting that since this is something that ought to be investigated, that member could not approve the order of merit list,” the PSC member explained.

Meanwhile, committee members expressed concern that one job competency model was used for both the Police Commissioner and Deputy Commissioner positions.

“Best practice in HR will tell you cannot have one competency model for a Commissioner and a Deputy Commissioner especially when you read the job summaries, they are different. So that to me points to a basic flaw,” Deyalsingh said.

KPMG awarded contract to assist in search for Police Commissioner