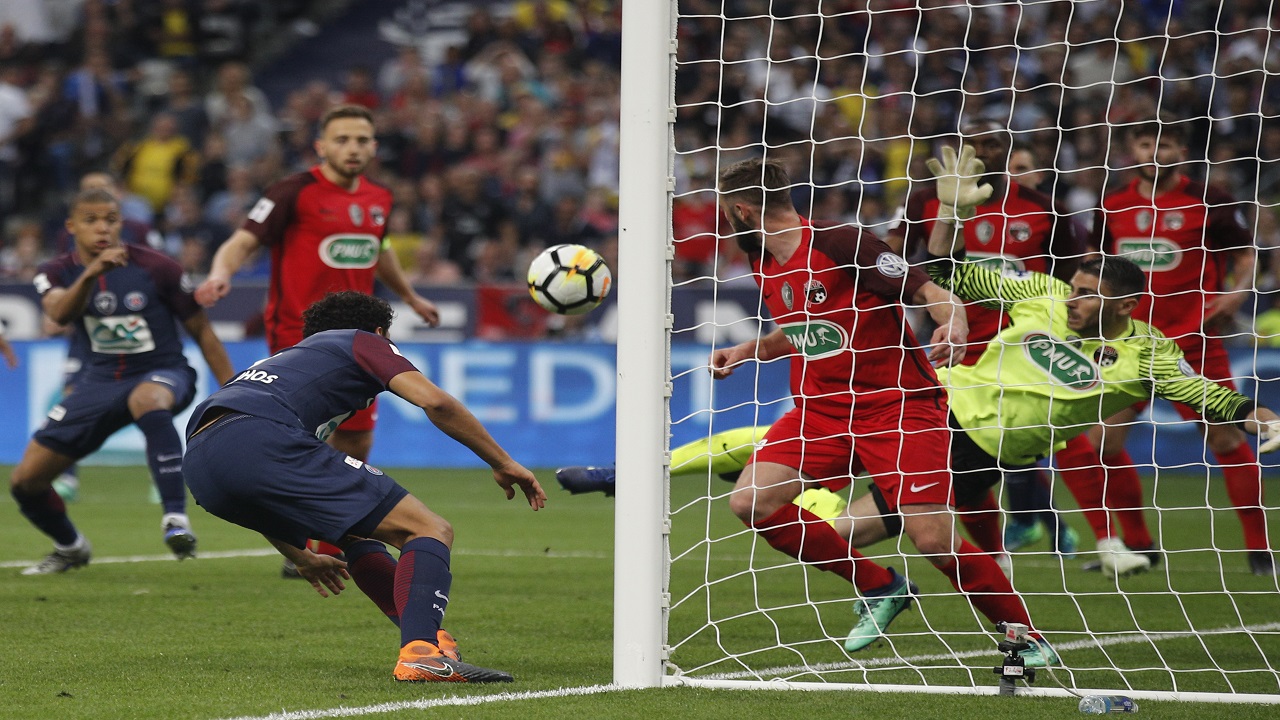 PSG's Marquinhos, left, passes the ball as Les Herbiers goalkeeper Matthieu Pichot prepares to save during the French Cup football final at the Stade de France stadium in Saint-Denis, outside Paris, Tuesday, May 8, 2018.

Paris Saint-Germain (PSG) wasted a host of chances before seeing off resilient third division side Les Herbiers 2-0 in the French Cup final on Tuesday.

It secured a domestic treble for PSG but it was a scrappy performance when a resounding win was widely expected.

Les Herbiers is a small town in western France with a population of 16,000, five times less than the capacity of the Stade de France.

PSG fielded their strongest side and went close several times before midfielder Giovani Lo Celso opened the scoring after 26 minutes.

PSG then missed a succession of chances, and had a goal from Kylian Mbappe disallowed by the Video Assistant Referee system, before Edinson Cavani slotted in a penalty in the 74th minute.

Roared on by its red-and-white contingent of around 15,000 fans, Les Herbiers went close when substitute Clement Couturier raced through in injury time.

PSG coach Unai Emery hugged his counterpart Stephane Masala after the final whistle, visibly impressed by the way his superbly-organized side had resisted so well.

"I'm very proud of my players, my club, and my town," Masala said. "We held on and didn't get routed. At the end, we even almost scored."

In a sporting gesture, PSG captain Thiago Silva invited Les Herbiers skipper Sebastien Flochon to lift the trophy with him.

While PSG secured their fourth straight French Cup and League Cup double, Les Herbiers will continue their fight to avoid relegation to the fourth tier with a crucial match on Friday.

The traveling hordes from the Vendee region gave their beaten team a rousing ovation. The club's coffers will be boosted, with Les Herbiers earning 1.5 million euros ($1.8 million) — or 75 percent of its annual budget.

While PSG's stars head to the World Cup in Russia in June, this is likely to remain the biggest game of their lives for Les Herbiers.

Before kickoff the third division team met French President Emmanuel Macron, who said "enjoy yourself" as he shook the hand of each player.

Masala told Macron "you're a source of inspiration for me," referring to his improbable rise to the presidency last year.

Les Herbiers had the first shot in the first minute, deflected by a defender for a corner. It was all PSG after that.

Lo Celso and Mbappe hit the post, winger Angel Di Maria headed over and Lo Celso struck the woodwork again, all inside 20 minutes.

Then, Lo Celso picked his spot from 22 meters (yards) with a curling strike into the bottom left corner.

Cavani was then denied by goalkeeper Matthieu Pichot and, moments later, Mbappe bundled the ball in from close range but referee Mikael Lesage used the VAR and ruled it out because Brazil defender Marquinhos had handled.

Cavani was then brilliantly thwarted again from close range by Pichot as chances kept coming.

Mbappe, twice, and Cavani miscued again before the Uruguay striker drilled his spot-kick into the bottom corner after being upended by Pichot.

Lesage could have sent Pichot off but only showed him a yellow card and the goalkeeper tapped the referee's hand in appreciation.

It was a quiet night for PSG goalie Kevin Trapp, who remarkably did not touch the ball until the 54th minute.

"They fought very well and played good football, too," Trapp said. "Honestly, it was tough. We had a lot of chances and some bad luck."

Pakistan cricketer back in squad after positive test