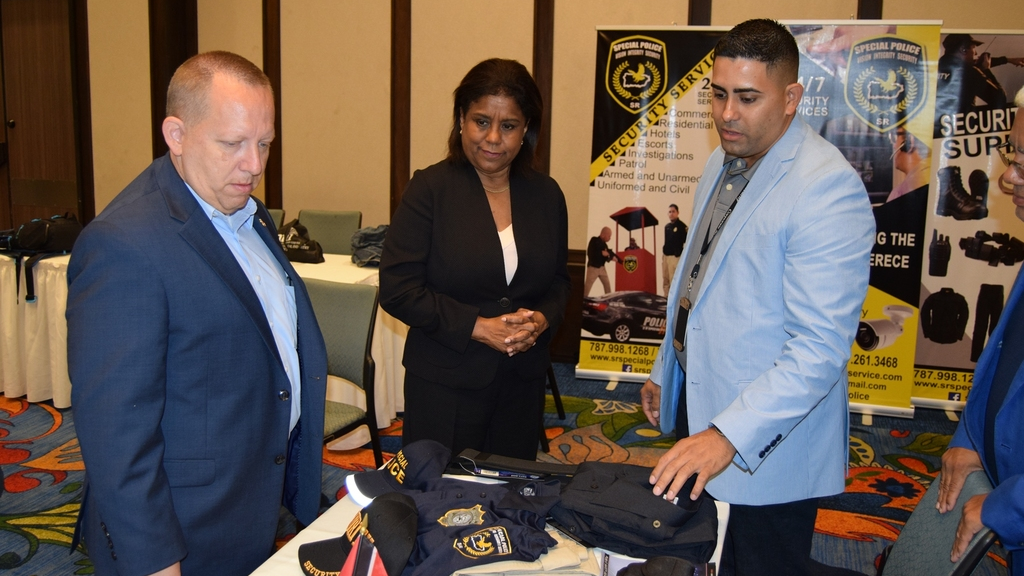 Minister Gopee-Scoon (centre) along with Mr. John McIntyre, Charge D’Affaires, US Embassy (left), looks at the security products on display by Puerto Rican company participating in the Trade Mission

“These trade missions provide Trinidad and Tobago with opportunities to deepen relations and increase business,” said Trade and Industry Minister, Senator the Honourable Paula Gopee-Scoon at the launch of Trade Mission from Puerto Rico hosted by the United States Embassy, Trinidad on Tuesday.

Emphasising the importance of the trading arrangements and relationship between the United States of America and CARICOM which is governed by the Caribbean Basin Initiative (CBI), Minister Gopee-Scoon said, “The CBI arrangement expires on December 31, 2019, and the Government is working closely with the US Government to ensure the continuation of this arrangement which will benefit the entry of the energy and non-energy products into the US”. The CBI provides duty-free access to the United States for most goods produced by CBI beneficiary countries.

Minister Gopee-Scoon highlighted a number of initiatives currently being pursued by the Government in line with its diversification agenda and identified the manufacturing sector as critical to its efforts. With regard to trade facilitation, she said that her Ministry, in collaboration with United Nations Economic Commission for Latin America and the Caribbean (UNECLAC) has commenced work on a new Trade Policy and Strategy for Trinidad and Tobago for the period 2018-2022.

The new Trade Policy and Strategy will articulate the Government’s trade-related policies aimed at enhancing and diversifying the country's economy and exports and increasing its earnings of foreign exchange.  Minister Gopee-Scoon urged the companies present to exploit the opportunities that will be presented over the next two days of the Trade Mission and to engage our local businesses on opportunities secure leads and convert those leads into results that would benefit both economies.

John McIntyre, Charge D’Affaires, US Embassy, in his remarks indicated that one of the goals of the US Embassy is to facilitate trade between the private sectors in the United States of America and other countries. Identifying Trinidad and Tobago as a regional leader in the Caribbean and the country’s strategic location and proximity to Central and South America, he noted that, “Trade Missions to Trinidad and Tobago will assist Trinidad and Tobago’s diversification thrust and the movement away for its dependence on oil and gas”.

Karrian Hepburn, Director, AMCHAM Trinidad and Tobago congratulated the business community in Trinidad and Tobago for the excellent work being undertaken and called for a more proactive private sector to move beyond CARICOM and enter new markets and create new opportunities.

The Puerto Rico Trade Mission to Trinidad and Tobago includes 11 companies from Puerto Rico representing sectors such as asset management and maintenance, food and beverage, executive protection and refrigeration services.

Puerto Rico moving on as one-year anniversary of Hurricane approaches