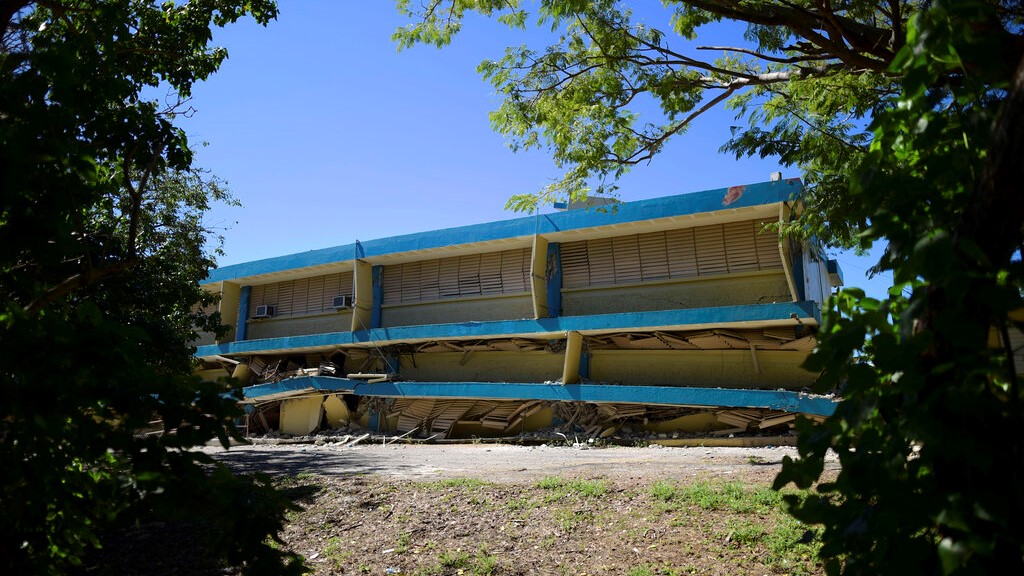 Puerto Rico's government is opening public schools in late January without knowing if they can withstand a big earthquake as concerns grow about weakened infrastructure that is displacing thousands of students.

By Friday, engineers had inspected 561 out of the island's 856 public schools and found that 9% are unsafe as a result of damage caused by a recent 6.4 magnitude quake and strong aftershocks. The inspections, however, are not to determine whether the schools can survive another strong earthquake or if they were built using short columns, considered a risk factor, said engineer Carlos Pesquera, whom the governor recently named as a risk mitigation adviser.

"We are trying to be clear that this is an issue of managing risk," he told The Associated Press, adding that the likelihood of another large quake is minimal. "It's important that our students are educated. Even though our facilities have issues, they are safer than (the students') homes."

Of the 326 schools that passed inspection, only 224 of them will open now, the island's Department of Education announced Friday evening. The schools are located in only five of the island's 78 municipalities. None of the schools in Puerto Rico's southern and western regions will open for now.

In the meantime, officials are considering alternate spaces such as modules, outdoor tarps and private buildings for thousands of other students unable to immediately return to their schools.

"Without a doubt, this situation represents a real challenge," Education Secretary Eligio Hernández said in a statement.

Parents, teachers and legislators have said they worry about the safety of buildings as Puerto Rico's Education Department stresses that only those schools deemed as safe will reopen on Jan. 27 and 28, nearly three weeks later than the initial start of classes.

"Let's be honest, we're all worried after seeing how the Agripina Seda school in Guánica collapsed," said Puerto Rico Rep. José Torres, who is part of a legislative commission analyzing the ongoing school inspections.

The 6.4 magnitude quake flattened the top two floors of the three-story school in the southern coastal city of Guánica on Jan. 7, two days before classes were scheduled to start.

The next day, nearly 50 engineers began evaluating all public schools in Puerto Rico amid reports of one death at a home in the nearby city of Ponce. U.S. President Donald Trump has approved a major disaster declaration that is expected to release more federal funds to offset a preliminary damage estimate of $200 million, a number that is expected to rise.

The inspections continue as daily aftershocks shake Puerto Rico, and schools will automatically be re-inspected following any quake of a 3.0 magnitude or higher, according to Puerto Rico's Infrastructure Financing Authority.

Meanwhile, the Department of Education deemed 137 schools as "partially adequate," which means some of the school's buildings are safe. However, Pesquera said those schools will remain closed and be re-inspected to address deficiencies, a process that could cost roughly $20 million to $50 million.

"The intent is to see if they can become operational at some point this semester to release the burden at some other schools," he said.

A plan to retrofit all schools that need it, which are an estimated 756 buildings, would roughly cost up to $2.5 billion, he said, noting those are preliminary figures.

Experts have warned that some 500 public schools across Puerto Rico were built before 1987 and don't adhere to new construction codes.