Puerto Rico opens only 20% of schools amid ongoing quakes 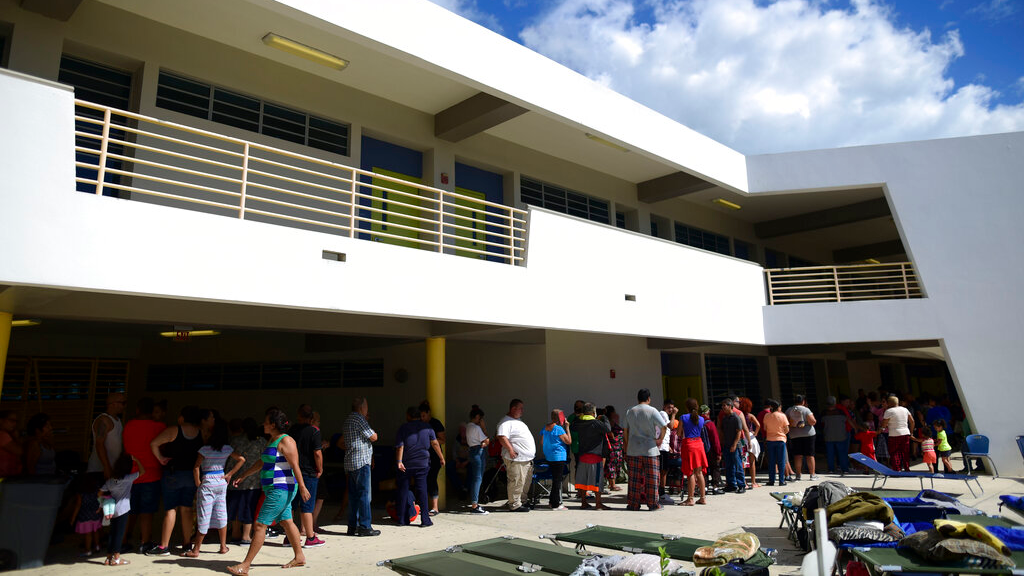 FILE - In this Wednesday, January 8, 2020 file photo, people whose homes are unsafe to enter after the previous day's magnitude 6.4 earthquake line up for lunch in an outdoor area of the Bernardino Cordero Bernard High School, which is being used as a shelter despite no electricity in Ponce, Puerto Rico. (AP Photo/Carlos Giusti, File)

Puerto Rico opened only 20 percent of its public schools on Tuesday following a strong earthquake that delayed the start of classes by nearly three weeks as fears linger over the safety of students.

Only 177 schools were certified to open after engineers inspected them for damage caused by the magnitude-6.4 earthquake that killed one person and damaged hundreds of homes on January 7.

But the inspections were not to determine whether a school could withstand another strong earthquake or had structural shortcomings such as short columns that make it vulnerable to collapse, further worrying parents.

“Of course I am afraid,” said 38-year-old Marién Santos, who attended an open house on Monday at her son’s Ramón Vilá Mayo high school in the suburb of Río Piedras where officials gave her a copy of the inspection report and evacuation plans.

Her concerns were echoed by the director of the school, Elisa Delgado. While she believes engineers did a thorough inspection of the school, built in the early 1900s, they warned her not to use the main entrance in an evacuation because it leads to an area filled with gas lines. The problem is that the other exits are too narrow to handle the school’s 450 students, she told The Associated Press.

Overall, engineers have inspected 561 of the island’s 856 public schools, finding at least 50 too unsafe to reopen, leaving some 240,000 students out of school for now. Ongoing tremors also are forcing crews to automatically re-inspect schools following any quake of 3.0 magnitude or higher, according to Puerto Rico’s Infrastructure Financing Authority.

Since the 6.4 quake, there have been several strong aftershocks, including a 5.9 magnitude one that hit on January 11 and a 5.0 that struck on Saturday. The biggest quake flattened the top two floors of a three-story school in the southern coastal city of Guánica on January 7, two days before classes were scheduled to start.

Overall, experts say that some 500 public schools in Puerto Rico were built before 1987 and don’t meet new construction codes. A plan to retrofit all schools that need it, an estimated 756 buildings, would cost up to $2.5 billion, officials have said, noting those are preliminary figures.

Education Secretary Eligio Hernández noted that another 51 schools are scheduled to start classes on February 3 and that his department is reviewing recommendations on how best to proceed with the other schools.

“The Department of Education is going to take the time it needs and will take all necessary actions so that parents ... feel satisfied,” he told reporters on Monday.

Elba Aponte, president of Puerto Rico’s Association of Teachers, told the AP that she has received complaints and pictures from parents and school employees of at least 10 schools that are reopening but that they feel are still unsafe.

Most of the pictures are of cracks in the walls and roofs of those schools, she said.

“Their concerns are quite valid,” Aponte said, adding that she would share them with the island’s education secretary.

Meanwhile, school and government officials are trying to figure out what to do with the roughly 240,000 students who aren’t able to go to school yet, either because their building was deemed unsafe or has not yet been inspected. No schools in the island’s southern and southwest region will reopen for now, officials say.

Options include placing students in other schools with revised schedules or holding classes in refurbished trailers or outdoors under tarps, Aponte said as she lamented the situation.

“It’s terrible,” she said. “If there was one place where they could feel safe, it was at school.”