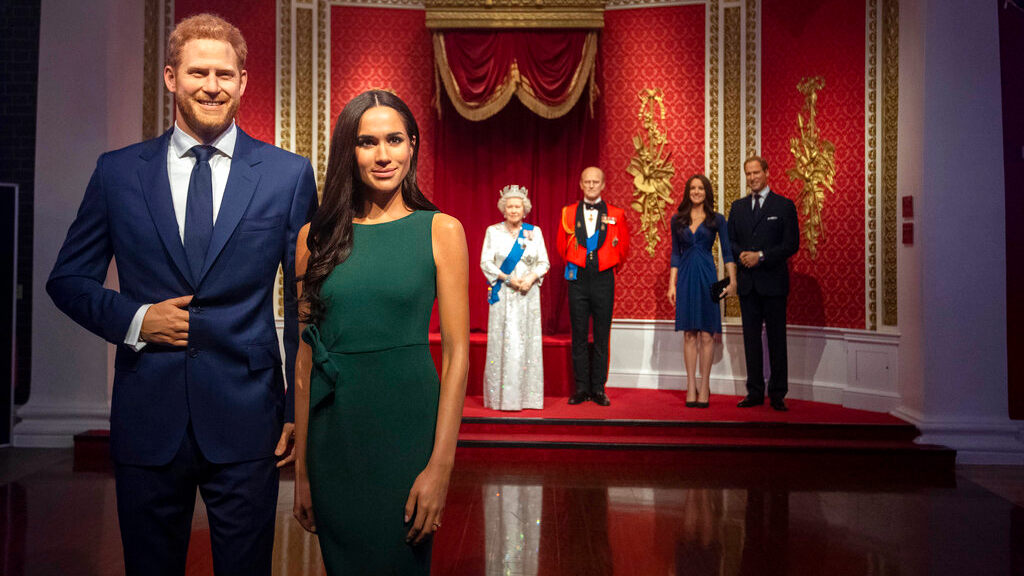 The figures of Britain's Prince Harry and Meghan, Duchess of Sussex, left, are moved from their original positions next to Queen Elizabeth II, Prince Philip and Prince William and Kate, Duchess of Cambridge, at Madame Tussauds in London, Thursday January 9, 2020. (Victoria Jones/PA via AP)

Queen Elizabeth II agreed Monday to grant Prince Harry and his wife Meghan their wish for a more independent life, allowing them to move part-time to Canada while remaining firmly in the House of Windsor.

The British monarch said in a statement that the summit of senior royals on Monday was "constructive," and that it had been "agreed that there will be a period of transition'' in which the Duke and Duchess of Sussex will spend time in Canada and the UK."

The summit at the queen's Sandringham estate in eastern England marked the first face-to-face talks with Harry since he and Meghan unveiled the controversial plan to step back from their royal roles.

“My family and I are entirely supportive of Harry and Meghan’s desire to create a new life as a young family,'' the queen said in a statement. “Although we would have preferred them to remain full-time working members of the Royal Family, we respect and understand their wish to live a more independent life as a family while remaining a valued part of my family.''

The meeting came after days of intense news coverage, in which supporters of the royal family's feuding factions used the British media to paint conflicting pictures of who was to blame for the rift.

Buckingham Palace said “a range of possibilities” would be discussed, but the queen was determined to resolve the situation within “days, not weeks." Buckingham Palace stressed, however, that “any decision will take time to be implemented."

One of the more fraught questions that needs to be worked out is precisely what it means for a royal to be financially independent and what activities can be undertaken to make money. Other royals who have ventured into the world of commerce have found it complicated.

Prince Andrew, for example, has faced heated questions about his relationship with the late convicted sex offender and financier Jeffrey Epstein. Andrew, the queen's second son, has relinquished royal duties and patronages after being accused by a woman who says she was an Epstein trafficking victim who slept with the prince.

The Duke and Duchess of Sussex also face questions on paying for taxpayer-funded security. Home Secretary Priti Patel refused to comment, but said safety was a priority.

There were signs earlier in the day that the House of Windsor had moved to unite. Princes William and Harry issued a joint statement criticising a newspaper article on the severe strain in their relationship, calling the story offensive and potentially harmful as they embark on talks regarding the future of the British monarchy.

Though the statement didn't name the newspaper, the Times of London had a front page story about the crisis in which a source alleged that Harry and Meghan had been pushed away by the “bullying attitude from" William. The joint statement insisted that the story was “false.''

“For brothers who care so deeply about the issues surrounding mental health, the use of inflammatory language in this way is offensive and potentially harmful,” the statement said.

Queen to host crisis summit on Harry and Meghan's future

Prince Harry and Meghan Markle stepping down as senior royals

Prince Harry lashes out at UK press for treatment of Meghan