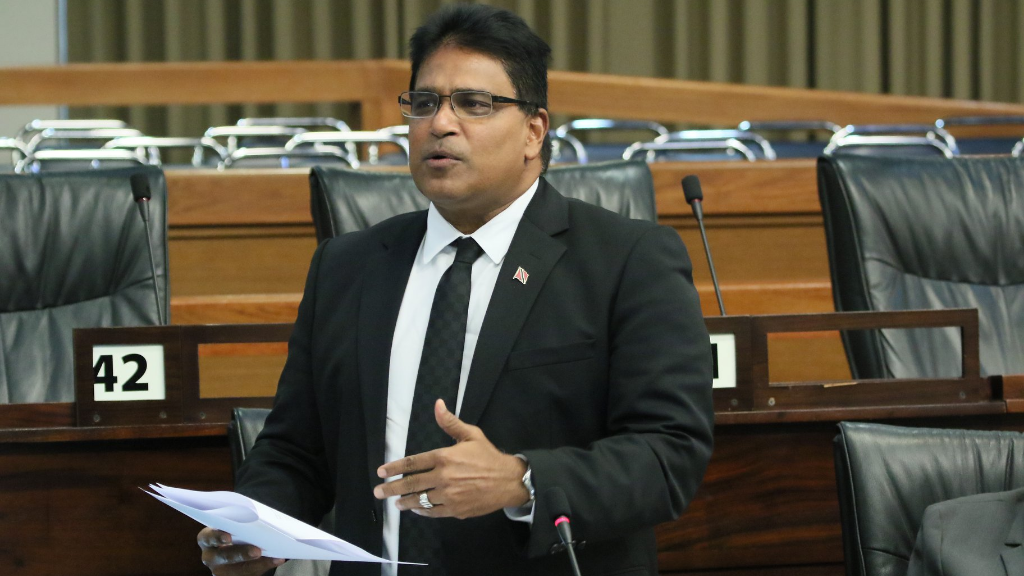 Oropouche East MP Dr Roodal Moonilal enters the debate on the budget. © 2019 Office of the Parliament.

President of the Oilfields Workers’ Trade Union (OWTU) Ancel Roget is being called upon to answer whether former People’s National Movement (PNM) candidate Vidya Deokiesingh facilitated a meeting with A&V Drilling regarding the Pointe-a-Pierre refinery sale.

This, as Oropouche East MP Dr Roodal Moonilal suggested that A&V Drilling was seeking to own the refinery through “backhand” channels.

He raised questions over possible manipulation by A&V Drilling as he made his contribution to the debate on the budget in Parliament on Tuesday.

His questions followed the circulation of a photo on social media, in which Roget was pictured with Movement for Social Justice (MSJ) leader David Abdulah and CEO and Managing Director of Sunstone Equity John Van Dyke.

Van Dyke was brought on by the union in October 2018 to provide a financial plan for its proposal for the refinery that would appeal to the board and government.

As the Opposition MP questioned whether Deokiesingh was the one who took the photo, he asked whether another entity was trying to gain ownership of the refinery.

“Is there some backhand way for persons who have been accused of fake oil and other offences, is this a backhand way that they will now claim the refinery?

After the taxpayer put $11 billion into the refinery? They will now claim it and look to make a good profit… it is the web that they are producing, and infiltrate… to get their paws on the refinery.”

He called on those privy to the meeting to disclose details.

What are they sign­ing and could I ask them to con­firm if Mr Vidya De­ok­iesingh took the pic­ture that I have in my hand,” he asked.

Moonilal also questioned why a year later there was no update on an investigation by the police and others into a wire transfer to a Florida bank account allegedly linked to A&V.

“One year and one week lat­er, where are the find­ings? Not one - po­lice, Fi­nan­cial In­tel­li­gence Bu­reau, At­tor­ney Gen­er­al - have made any find­ings pub­lic. Not one. Be­cause I made the al­le­ga­tions I had the duty to con­tin­ue on that mat­ter be­cause you know why I raised the mat­ter.”

The Opposition MP said he resorted to his own investigation and uncovered these connections.

Meanwhile, in a Facebook post on Tuesday night, the OWTU slammed Moonilal’s “fake bombshell” as it denied that there was any money transfer. The Union also said Sunstone’s initial involvement in its lease proposal for the refinery was no secret.

However, the OWTU stated that Sunstone has nothing to do with its current bid.

The Union is expected to make an official response to the allegations at a media conference on Thursday.