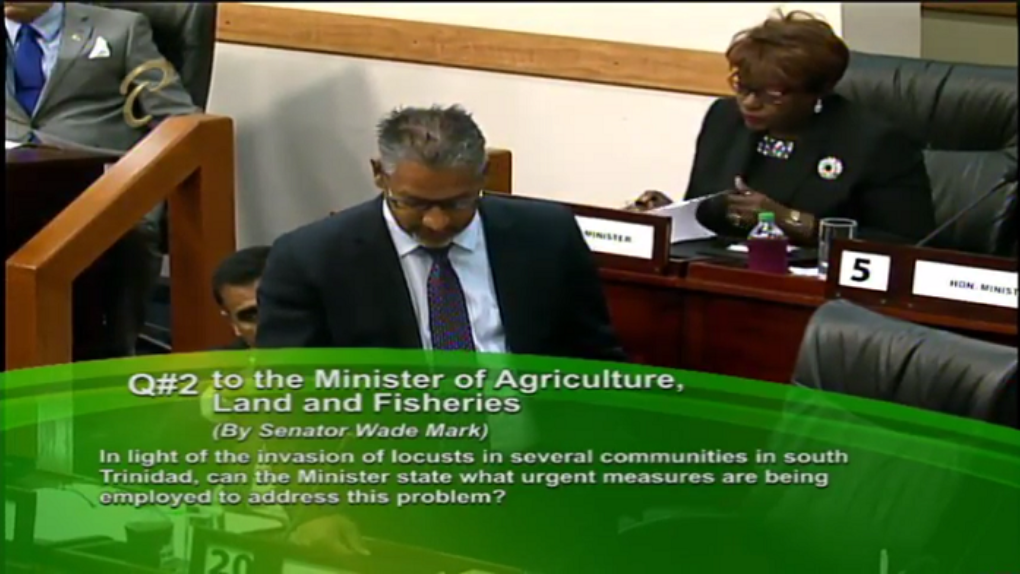 Agriculture, Lands and Fisheries Minister Clarence Rambharat said it is not government policy to offer compensation to farmers dealing with locusts and other pests which plague their crops, however, the Ministry is working assiduously to treat with the problem.

Speaking in the Senate in response to an urgent question posed by Opposition Senator Wade Mark, Rambharat said the problem has been troubling farmers in Moruga and other parts of South Trinidad for some time, however, the Ministry has been dealing with the problem and will continue to treat with the matter.

“The current problems we’re experiencing in Moruga comes after a few infestations we’ve had in the past, the worst being in 2004 and more recently in October 2014 in Cedros, June/July 2014 in Chatham and September 2016 in Point Fortin.”

“There are two ways in which we approach any invasion, it’s a seasonal thing and one is proactive, and one is reactive. Locusts have a particular nesting season which is in the last quarter of the year, September to December, so when we responded in September in Point Fortin it was to deal with locusts appearing for the purposes of nesting.” 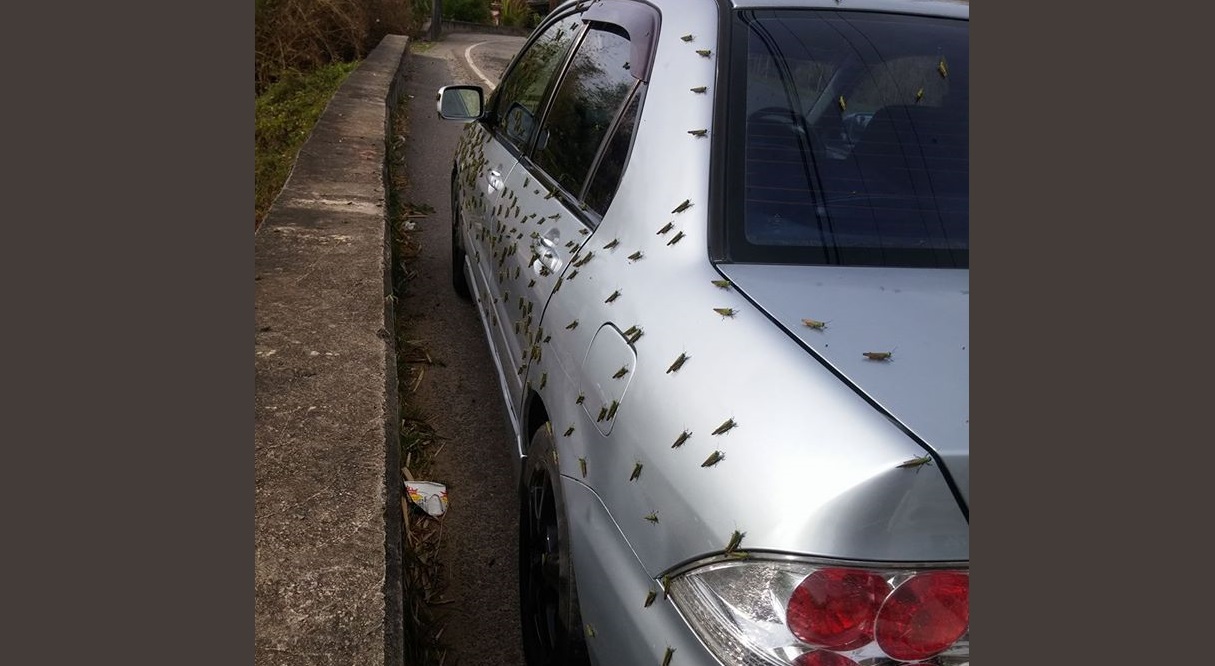 (Photo: A car in Princes Town covered with locusts.)

“Thereafter it’s mainly reactive to deal with the offspring from the nesting period, and we’ve had a particularly intense problem in Moruga. We’ve responded by putting in place more resources in terms of labour, equipment, chemicals. In the last month the Ministry had provided an additional seven mist-blowers and sprayers to deal with the low-flying locusts and we’ve seen the results in most areas,” he said.

Rambharat added that the area has been separated into areas of high and low frequency and the Ministry has been addressing the problem accordingly.

“We’ve divided Moruga into 24 areas, we’ve indicated which of those have high and which have low infestation and the Ministry is working to deal with the issue.”

Rambharat said five areas continue to have a high level of infestation and the Ministry has been focusing on that within the last few weeks and will continue to treat the issue aggressively.

“It’s a pest, it’s destructive to the farmers, we’ve seen the signs of the damage on some of the farms. Of course it will affect the social life and community life…in fact in dealing with the locusts we have to be careful that we do not overspray, we do not spray in a manner that will interfere with other forms of activity including beekeeping. It is a fact that it will interfere with agricultural production and the lives of the community.”

(Photo: The Ministry's crew operating a cannon sprayer in Cachipe, Moruga on Thursday 11th May, 2017.)

Mark asked whether compensation would be provided to farmers affected by the locusts, however, Rambharat said this is not Government policy.

“It is not the policy of this government or previous governments to compensate on the basis of something like the locusts or similar pests, but as far as possible the Ministry will ensure that the farmers who are affected are provided as much support as we could provide," Rambharat replied.