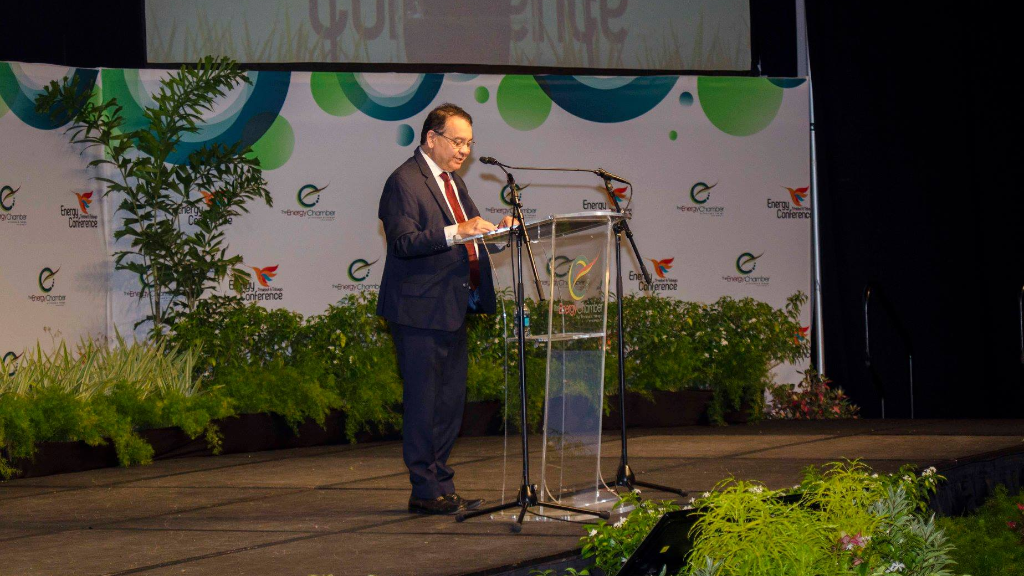 Energy and Energy Industries Minister Franklin Khan delivers the feature address at the opening of the Trinidad and Tobago Energy Conference 2018 on Monday.

From all indications, 2018 will be a promising year for the global oil and gas industry with the consensus amongst analysts that the industry is in recovery mode.

The outlook for oil and gas prices for 2018 is positive and the forecast for WTI and Brent crude prices is in the region of US$50 to US$60 per barrel.

And in the instance of Trinidad and Tobago, with signs of recovery in the domestic energy sector in 2017 and planned development drilling activity for 2018, there appears to be positive movement and good news for the sector.

Speaking at the opening of the Trinidad and Tobago Energy Conference 2018, hosted by the Energy Chamber of Trinidad and Tobago, Energy and Energy Industries Minister Franklin Khan said plans are underway for increased drilling and exploration activity and described the activity as reassuring.

“Given existing and proposed projects, preliminary estimates indicate that the gas supply for 2018 could average in the region of 3.7Bcf per day,” he said.

The resurgence of activity in the domestic oil and gas industry is expected to continue into 2018 with plans by companies to drill 81 wells, comprising 64 development wells and 17 exploration wells.

bpTT will spud five development wells in 2018, which includes two on Angelin and three on Cannonball.

The Minister indicated that drilling is scheduled to begin in the fourth quarter of 2018 and first gas from Angelin is expected in first quarter 2019.

Meanwhile, Shell has proposed to drill seven development wells in its East Coast Marine Area (ECMA) of which three wells are earmarked for the Starfish Field and four in the Dolphin Field.

DeNovo Energy, which operates Block 1(a) on the West Coast of Trinidad, will drill three development wells in its Iguana Field, with the drilling and completion of these wells expected during 2018 with first gas projected for the fourth quarter, at an initial rate of 60 MMscf/d.

Petrotrin is expected to lead the other major planned development drilling activity, the Minister said, primarily on land with 18 wells; the operators under the Lease Operatorship, Farmout and Incremental Production Services (25 wells) and Primera Oil and Gas Limited (8 wells).

The proposed development activities are expected to have an incremental impact on hydrocarbon production, particularly natural gas, which in 2017 had made a positive movement largely due to projects such as Sercan, TROC and Juniper.

Plans are also in place to drill 17 exploration wells as compared to one well in 2017. EOG resources have scheduled the drilling of four exploration wells in its Modified U (b) block in period commencing second quarter and ending fourth quarter 2018.

Crossborder and Venezuelan gas is also high on Government’s agenda with the Unitisation and Unit Operating Agreement among E&P companies, PDVSA, Chevron and Shell Trinidad and Tobago Limited for Loran-Manatee completed and expected to be executed in the first quarter of 2018.

Additionally, a Gas Sales Agreement for Dragon Gas among NGC, Shell and PDVSA for a gas supply estimated at an initial 150 MMscfd per day has been drawn-up by the parties and is also expected to be executed in the first quarter 2018.

“Given existing and proposed projects, preliminary estimates indicate that the gas supply for 2018 could average in the region of 3.7Bcf per day. This would bring a measure of relief to the downstream companies. In respect of crude oil and condensate, the current production of approximately 72,000 barrels of oil per day is expected to be maintained,” Khan said.

Regarding State-owned Petrotrin which accounts for approximately 58 per cent of the country’s total production, Khan noted that efforts are underway by the Board to return the company to profitability.

Petrotrin is currently facing a debt of $13 billion, and due to financial difficulties, the company has been unable to meet its obligations to the State – some $3 billion.

Petrotrin will be drilling five exploration wells in its Trinmar acreage, and are to be drilled on Petrotrin’s land acreage by lease and farm-out operators.

The Minister said restructuring to bring the company back to viability, however, will include widespread consultations with all stakeholders and particularly the employees’ union representative.

“Given the planned level of activity for 2018, the outlook for the domestic energy sector is reassuring. This has been taken into consideration by the International Monetary Fund in its projection of real GDP growth of 1.9% in Trinidad and Tobago in 2018,” Khan added.