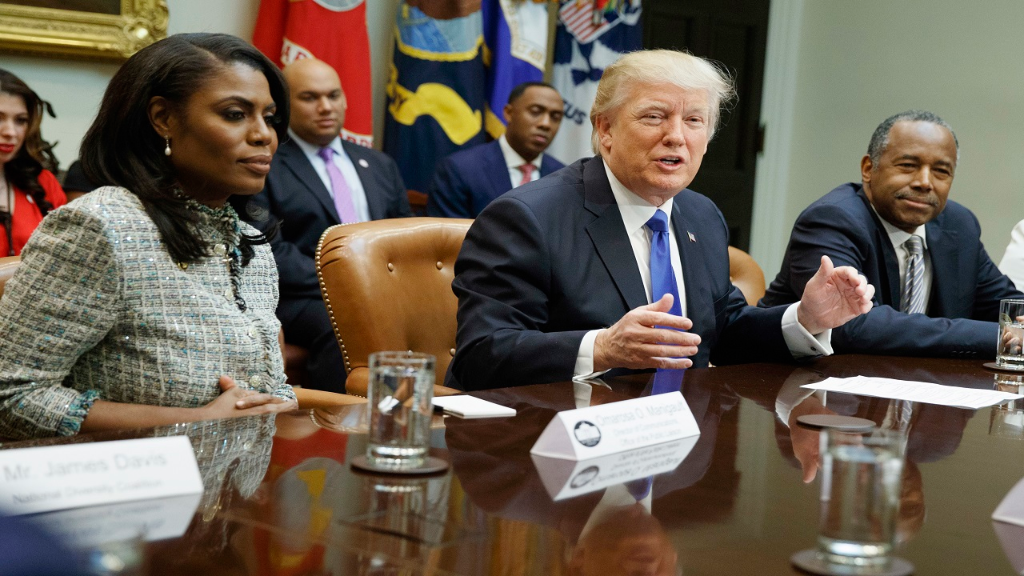 Omarosa Manigault Newman on Thursday released another secret audio recording that she says proves President Donald Trump wanted to silence her after firing her from the White House.

In the recording played on MSNBC, Trump's daughter-in-law Lara Trump offers Manigault Newman a job earning $15,000 a month. The job wouldn't require her to report to any particular office or have a specific set of duties, other than to speak positively on Trump's behalf as part of his re-election campaign.

Lara Trump, married to Eric Trump, can be heard on the tape noting a New York Times report that suggested Manigault Newman had inside information that could be damaging to Trump.

"It sounds a little like, obviously, that there are some things you've got in the back pocket to pull out," Lara Trump said. "Clearly, if you come on board the campaign, like, we can't have, we got to ... "

The secret recording is one of several Manigault Newman has released this week to back up her claims in her new book, "Unhinged."

In a written response Thursday, Lara Trump said her entire family was concerned for Manigault Newman after she was fired "because we had no idea about the basis for her dismissal," but "we still wanted her on our team because we cared so much about her personally."

Lara Trump says that's why she reached out and offered Manigault Newman a job on the re-election campaign "before we knew anything about the gross violations of ethics and integrity during her White House tenure."

Lara Trump says that the latest tape is a "fraud" and that the snippets of discussion aired by MSNBC "took place in numerous phone calls over the course of several weeks."

"Woman to woman, I shared a connection with Omarosa as a friend and a campaign sister, and I am absolutely shocked and saddened by her betrayal and violation on a deeply personal level," the president's daughter-in-law said.

A former contestant on Trump's reality TV show "The Apprentice," Manigault Newman was one of Trump's most prominent African-American supporters during his campaign. He hired her to be a White House assistant, earning $179,700 a year as director of communications for the White House office of public liaison.

But she was deeply disliked by many of her colleagues and eventually was ousted by Trump's chief of staff, John Kelly, for "significant integrity issues."

According to other recordings released this week, Trump appeared to be in the dark on her December 2017 firing. And Kelly suggested, "If we make this a friendly departure ... you can go on without any type of difficulty in the future relative to your reputation."

Manigault Newman alleges there is a tape of Trump using a racial slur while working on "The Apprentice." Trump denies this and has lashed out at his former aide on Twitter, calling her "wacky and deranged," ''not smart" and a "dog."

Defiant as Trump rages, Omarosa says she won't be silenced