'Red river' in Jamaica may be due to algal bloom - NEPA 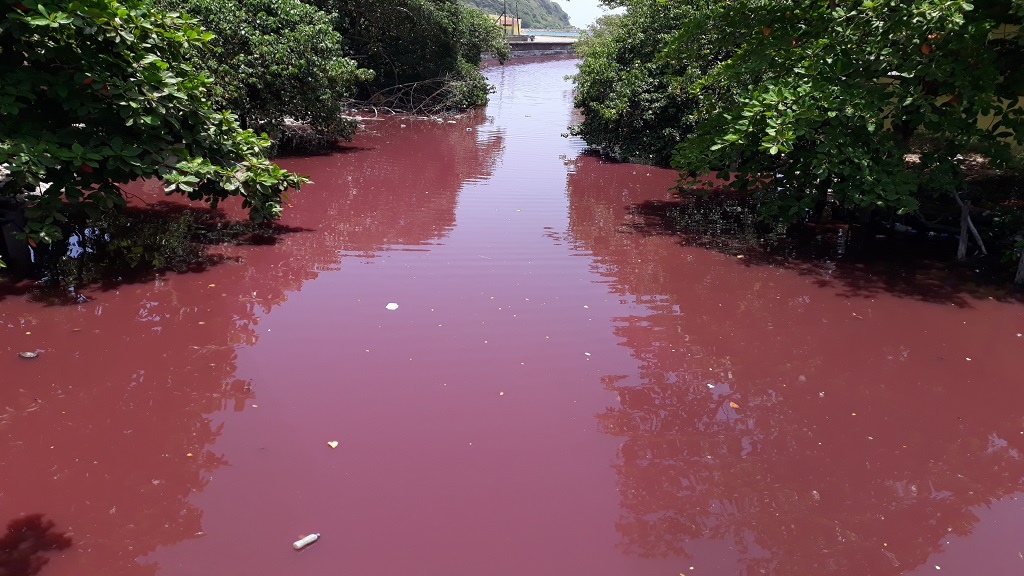 Photograph showing discolouration of the water at a section of the Outram River in Port Maria, St Mary.

Jamaica's National Environment and Planning Agency (NEPA) says an algal bloom known as ‘red tide’ may be behind the ‘reddish-pink’ discolouration of the Outram River that runs through Port Maria in St Mary.

The environmental agency is currently conducting a probe of the development which was reported by Loop News over the weekend.

In a news release on Monday, NEPA said a joint site visit was conducted by a team from the agency, the St Mary Municipal Corporation and the St Mary Health Department on Thursday, July 25, 2019. The team reportedly investigated the possible sources of the discolouration and completed ‘ground thruthing’ activities along the corridors of the river aimed at identifying possible anthropogenic (man-made) influences on the river.

Richard Nelson, Senior Manager, Environmental Management, NEPA explained that, “during the investigation it was noted that the mouth of the river was blocked off from the sea and that there was very little flow of water in the upper sections of the river’.

He added, “a ‘reddish-pink discolouration containing suspended matter was observed. This discoloration had a distinct odour of hydrogen sulphide. In addition, on-site water quality measurements were taken and samples collected and sent for laboratory analysis at two laboratories. Based on the on-site measurements, the strong odour of hydrogen sulphide and the ‘reddish-pink’ colouration of the water, the agency’s tentative conclusion is that the discolouration is due to an algal bloom known as ‘red tide’.”

NEPA said it now awaits the outcome of laboratory analysis by the agency and the Centre for Marines Sciences at the University of the West Indies. The agency will also continue to work with the St Mary Municipal Corporation and the Water Resources Authority, should corrective measures based on the results of the analysis becomes necessary, the release said.

Eyebrows were raised by persons who observed the river in Port Maria on Saturday. For some individuals, it was first they had witnessed any river in that state.

"A first mi see the river look like this. Rain fall yesterday (Friday) morning, so mi nuh sure if that a di cause, but first me see it like this," a man who claimed to be a resident of Frontier in Port Maria, indicated.

"It look like blood eh," was the response of another curious onlooker.

"Sign and wonder," were the only words from another passerby.