Love was the theme and the message from the cast of Redemption, the Fifth Coming.

Hammond, a true legend, was the man many turned out to see, creating bumper to bumper traffic around the Queen’s Park Savannah where the show was held.

He didn’t disappoint. Backed by a tight-knit Harmony House band, a smaller, older looking Hammond than many remember, showed that despite any physical changes, his voice is still powerful and he still has the energy to bring the stage to life.

Backed by two superb background vocalists, Hammond delivered his many, many hits among them ‘Feel Good’, ‘Rockaway’, ‘Tempted to Touch, ‘Can’t stop a man from Trying’ and ‘Sweet Lies’.

The concert attracted fans of all ages and races and though Hammond was the main attraction, the mammoth crowd was thoroughly entertained by the other cast members.

Mikey Spice, in only his second performance in Trinidad and Tobago, was brought to the brink of tears at the show of love he received from the crowd. 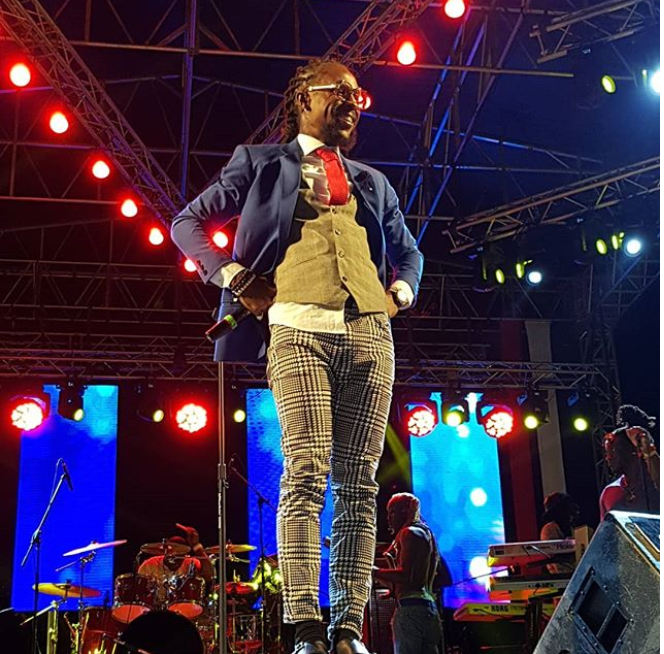 The singer, whose remake of Neil Diamond’s ‘I Am, I Said” is very popular in T&T,  proved that he is no one-hit wonder as he positioned himself as the foreplay to a night that climaxed with Hammond.

Among the songs from his catalogue he sang were ‘Grab Yuh Lass and Come’, ‘Oh Me, Oh My’, a song he recorded with the late Garnet Silk and his popular remake of Barry White’s ‘Practice What You Preach’. Spice, who was engaging with the ladies throughout, came down from the stage and climbed the scaffolding to interact with the crowd for ‘I Am, I Said’.

Returning to the stage for an encore, the clearly emotional singer said: “I want to thank you for showing me love on only my second time here…I am gonna break down,” he said, his voice cracking as he finished with “When You’re Lonely”.

Dressed in an Ecliff Elie suit, Jah Cure cut a sharp figure on stage but by the end was barebacked, having thrown his jersey, rag and bracelets into the mass of screaming women.

Jah Cure, who calls T&T his second home, did as he promised, digging deep into his hit-filled catalogue to deliver with passion, songs such as ‘Love Is’, ‘Never Find’, ‘Straight From My Heart’, ‘Stronger’, ‘Sunny Days’, ‘Jah Bless Me’ and ‘When Can I See You Again’.

If Cure was the lover, Tarrus Riley was the messenger.  Bursting onto the stage in his first Redemption appearance, Riley weaved a musical story going from the message of peace and love to romance and breakups.

He started with songs such as ‘Gimme Likkle One Drop’, ‘My Day’ and ‘Love’s Contagious’ before moving into a version of ‘Rivers of Babylon’ ad Michael Jackson’s ‘Human Nature and, lamenting the state of violence in T&T and Jamaica, he changed up the lyrics to ‘Graveyard’ substituting Jamaican places with those of Trinidad.

T&T rising reggae artist Prince Swanny joined Riley on stage to add to the theme with his song ‘Brother Brother’.

Riley’s Black Soil band which included saxophonist Fraser, was also part of the entertainment, with each band member taking the spotlight to show they can sing as well as play instruments.

After that interlude during which Riley did his soca ‘Memories’ which he sang with Machel Montano, Riley focused on personal relationships with ‘Nice to know you’, ‘Superman’, his mega-hit ‘She’s Royal’ and ended the show with his breakup songs ‘Cold Girl’ and ‘Don’t Come Back’.

Redemption started around 8 pm with a performance from local reggae artist Ziggy Ranking and moved swiftly with minimal time between band changes until Hammond ended his performance around 2 am.