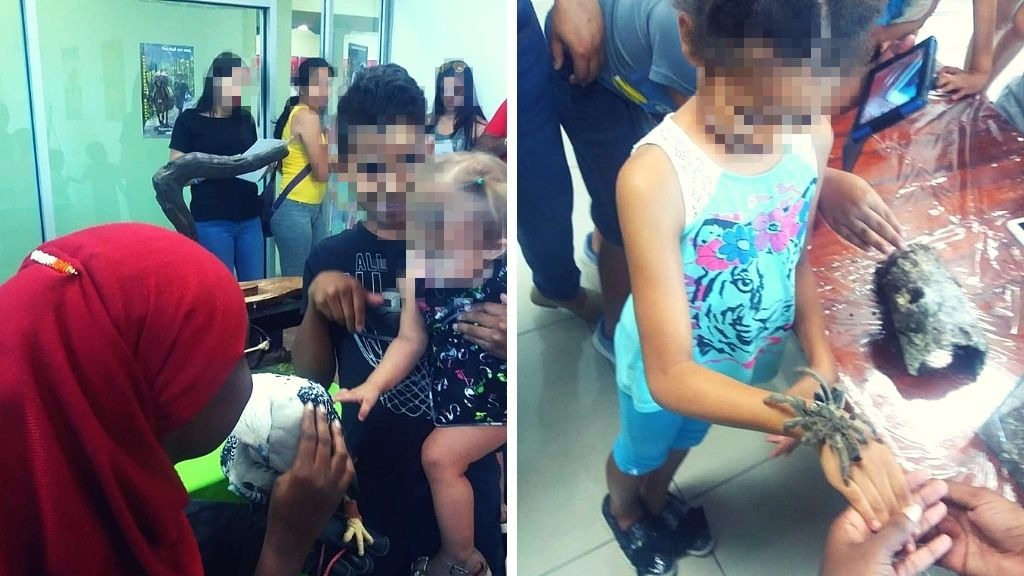 Photos courtesy the El Socorro Centre for Wildlife Conservation. Photos of the refugee children have been blurred for their protection.

Although some refugee children are barred from attending public schools, one organisation is trying to ensure they are still given opportunities to learn.

Andreina Briceno-Brown, director of La Casita, a summer camp for migrant and refugee children, said the informal school was started in order to give children an avenue for learning.

Briceno-Brown, who is a Trinidadian resident, said the programme involves giving children, many of whom are refugees, an informal learning space to give them a sense of normalcy.

The summer camp, based in Arima, hosted animals from the El Socorro Wildlife Centre, where they learned about local animals, many of which are also found in Venezuela.

Director of the El Socorro Wildlife Centre, Ricardo Meade, showed the children various local animals and taught them about their habitats.

“Most of these kids don’t have access to school so being in learning spaces like that can help them settle back into that type of socialisation.”

“A lot of them have parents who work whole day and they spend the whole day behind a phone or tablet, so we get them out of that and allow them to learn to play and learn something new.”

“It’s not formal education but it allows them to be with other kids and enjoy being a child because they’ve been through a lot,” she said.

The camp is part-sponsored by the Arima Shopping Centre.

Briceno-Brown said she has been doing camps for about 10 years but said this year the camp has had mostly Venezuelan children, due to the ongoing economic crisis there.

At the moment there on average about 35 children who attend the camp, but the group has held up to 55 children, she said.

Approximately 35 of the children are refugees, registered with the UNHCR.

Briceno-Brown said she hopes that the children can resume some type of formal education soon.

“We’re really trying to help them to get access to education, so that they will be able to one day support themselves,” she said.

The children also visited other local sites such as the Emancipation Village and a Chaguanas deya store where they learned to make deyas.

Bricen-Brown also thanked their many supporters who helped them to create an educational system for the children.

“We have a lot of help and benefactors who help us,” she said.

She said children even learned craft-making skills such as cooking and making pinatas.

“These children are not being allowed to develop (through public school education) so we’re trying to teach them many different things because we’re trying to prepare them especially with regard to a lack of knowledge and the language barrier.

“Everyone has to develop their abilities and learn many different things. That way they won’t suffer but can take care of themselves with different skills,” she said.

Due to local im­mi­gra­tion reg­u­la­tions which require a stu­dent per­mit, many young asylum seekers and refugees are barred from public education as they may have entered the country without approval from immigration officials.

As a result, the refugee children are unable to access public education and many refugee parents cannot afford to pay for their children to attend private schools.

Education is a basic human right, enshrined in the 1989 Convention on the Rights of the Child and the 1951 Refugee Convention.

According to research from UNESCO, access to quality educational opportunities can contribute to peace and security and mitigate factors that lead to conflict and displacement. The UNESCO research found that low levels of access to education and high levels of inequality in education can, in turn, heighten the risk of violence and conflict.

Anyone wishing to donate to La Casitas or assist in any way can contact the group on Facebook: https://www.facebook.com/lacasitahispaniccc