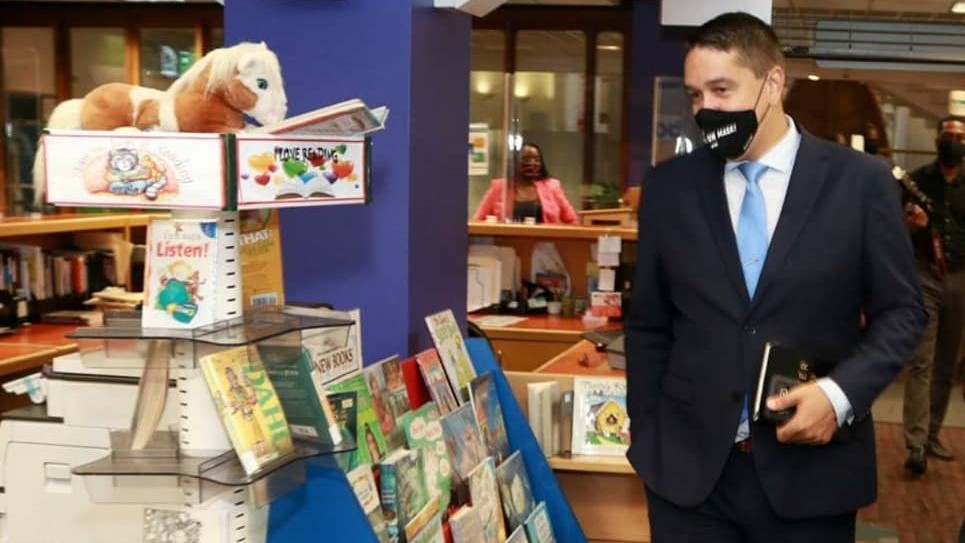 Minister in the Office of the Prime Minister with responsibility for Communications, Symon de Nobriga tours a library.

Minister in the Office of the Prime Minister with responsibility for Communications, Symon de Nobriga, believes that libraries still have their place in the age of technology.

Speaking to Loop News, de Nobriga explained that while the concern is a valid one, the National Library and Information System Authority (NALIS) and their libraries have found ways to adapt and remain a studying staple especially in the face of the pandemic.

“The COVID-19 environment has pushed us further down the virtual and digital space, much faster than we would have thought. NALIS still has a role to play, both in the overall development of the country but even more so given what the Ministry of Education is facing in the pandemic. The library has a place for that; a place where students can access information,” he said.

Purists and bookworms, if no one else, will keep libraries open. The Minister said that in some circles, there’s nothing like the effect of a real book in real hands.

“It’s about making a physical place where people can come to share space with likeminded people but other than that, libraries have taken on a virtual life as well,” he said.

During his inaugural visits as Minister, de Nobriga noted there were ways libraries could improve; he’s working on ways to ensure those changes are made.

“In speaking with the Chairman, NALIS does have a strategic plan for that. I think that the traditional role of a library has changed. I think libraries are a living, breathing symbol of knowledge so it’s about creating a space where people can come to if they don’t have library services available to them at home,” he added.

De Nobriga has youth in mind for Communications mandate