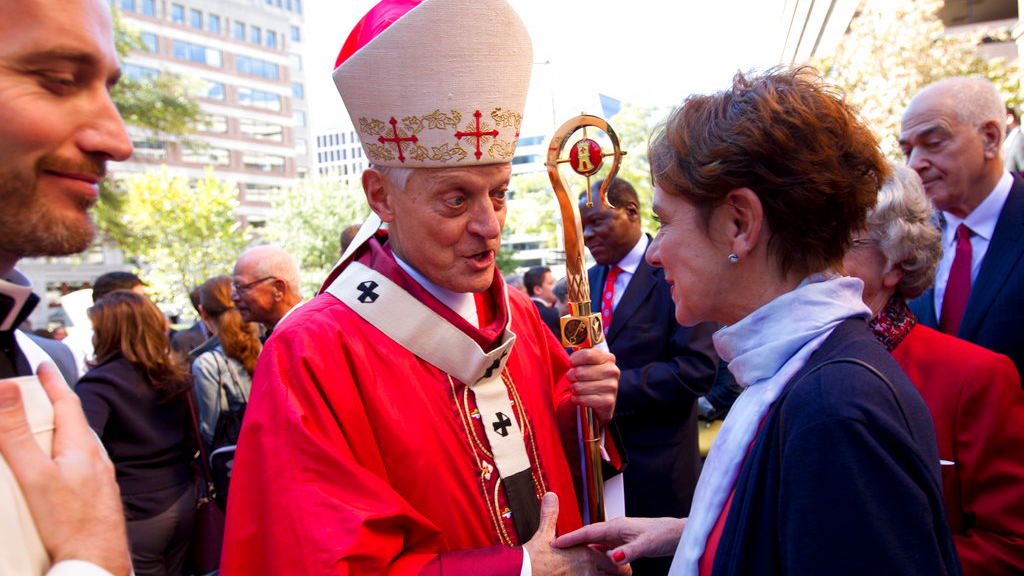 This Oct. 1, 2017, file photo shows Cardinal Donald Wuerl, Archbishop of Washington shaking hands with churchgoers at St. Mathews Cathedral after the Red Mass in Washington. Wuerl is defending himself ahead of a forthcoming grand jury report investigating child sexual abuse in six of Pennsylvania's Roman Catholic dioceses. He says the report will be critical of some of his actions as Pittsburgh's bishop. (AP Photo/Jose Luis Magana, File)

More than 1,000 children — and possibly many more — were molested by hundreds of Roman Catholic priests in six Pennsylvania dioceses, while senior church officials took steps to cover it up, according to a landmark grand jury report released Tuesday.

The grand jury said it believes the "real number" of abused children might be "in the thousands" since some records were lost and victims were afraid to come forward. The report said more than 300 clergy committed the abuse over a period decades, beginning in the mid-1950s.

Pennsylvania Attorney General Josh Shapiro said the two-year probe found a systematic cover-up by senior church officials in Pennsylvania and at the Vatican.

"The cover-up was sophisticated. And all the while, shockingly, church leadership kept records of the abuse and the cover-up. These documents, from the dioceses' own 'Secret Archives,' formed the backbone of this investigation," he said at a news conference in Harrisburg.

Significantly, the report faulted Cardinal Donald Wuerl, the former longtime bishop of Pittsburgh who now leads the Washington archdiocese, for what it said was his part in the concealment of clergy sexual abuse. Wuerl, one of the highest-profile cardinals in the United States, released a statement Tuesday that said he had "acted with diligence, with concern for the victims and to prevent future acts of abuse."

The grand jury scrutinized abuse allegations in dioceses that minister to more than half the state's 3.2 million Catholics. Its report echoed the findings of many earlier church investigations around the country in its description of widespread sexual abuse by clergy and church officials' concealment of it.

"Church officials routinely and purposefully described the abuse as horseplay and wrestling and inappropriate conduct. It was none of those things. It was child sexual abuse, including rape," Shapiro said.

The panel concluded that a succession of Catholic bishops and other diocesan leaders tried to shield the church from bad publicity and financial liability by covering up abuse, failing to report accused clergy to police and discouraging victims from going to law enforcement.

Yet the grand jury's work won't result in justice for the vast majority of those who say they were molested by priests as children. While the probe yielded charges against two clergymen — including a priest who has since pleaded guilty, and another who allegedly forced his accuser to say confession after each sex assault — the other priests identified as perpetrators are either dead or will avoid arrest because their alleged crimes are too old to prosecute under state law.

"We are sick over all the crimes that will go unpunished and uncompensated," the grand jury said.

The document comes at a time of renewed scrutiny and fresh scandal at the highest levels of the U.S. Catholic Church. Pope Francis stripped 88-year-old Cardinal Theodore McCarrick of his title and ordered him to a lifetime of prayer and penance amid allegations that McCarrick had for years sexually abused boys and had sexual misconduct with adult seminarians.

Wuerl has come under harsh criticism over his response to the McCarrick scandal, with some commentators questioning his claims of surprise and ignorance over allegations that McCarrick molested and harassed young seminarians.

Wuerl replaced McCarrick as Washington's archbishop after McCarrick retired in 2006.

The Pennsylvania grand jury, convened by the state attorney general's office in 2016, heard from dozens of witnesses and reviewed more than a half-million pages of internal documents from the Allentown, Erie, Greensburg, Harrisburg, Pittsburgh and Scranton dioceses.

Some current and former clergy named in the report went to court to prevent its release, arguing it violated their constitutional rights to reputation and due process of law. The state Supreme Court said the public had a right to see it, but ruled the names of priests and others who objected to the findings would be blacked out pending a September hearing on their claims.

The identities of those clergy members remain under court seal.

A couple of dioceses decided to strip the accused of their anonymity ahead of the report and released the names of clergy members who were accused of sexual misconduct. On Friday, the bishop of Pittsburgh's diocese said a few priests named in the report are still in ministry because the diocese determined allegations against them were unsubstantiated.