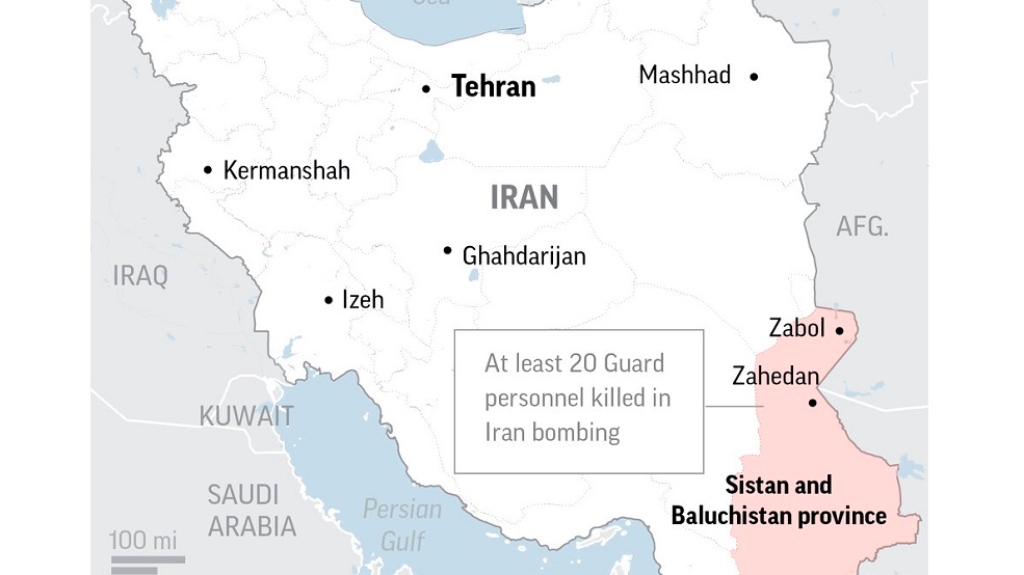 There was no immediate claim of responsibility for the attack, which came on the day of a U.S.-led conference in Warsaw that included discussions on what America describes as Iran's malign influence across the wider Mideast. It also comes two days after Iran marked the 40th anniversary of its 1979 Islamic Revolution.

The state-run IRNA news agency, citing what it described as an "informed source," reported the attack on the Guard in Iran's Sistan and Baluchistan province.

The province, which lies on a major opium trafficking route, has seen occasional clashes between Iranian forces and Baluch separatists, as well as drug traffickers.

The Guard is a major economic and military power in Iran, answerable only to the country's supreme leader, Ayatollah Ali Khamenei.

While Iran has been enmeshed in the wars engulfing Syria and neighboring Iraq, it largely has avoided the bloodshed plaguing the region. In 2009, more than 40 people, including six Guard commanders, were killed in a suicide attack by Sunni extremists in Sistan and Baluchistan province. Jundallah, a Sunni extremist group still active in the region on Iran's border with Pakistan, claimed responsbility for that attack.

A coordinated June 7, 2017 Islamic State group assault on Parliament and the shrine of Ayatollah Ruhollah Khomeini, the leader of Iran's Islamic Revolution. At least 18 people were killed and more than 50 wounded.

And most recently, an attack on a military parade in September in Iran's oil-rich southwest killed over 20 and wounded over 60.

The attacks come as Iranian officials have said they blame Saudi Arabia and the United States for stirring up dissent in the country. President Donald Trump, who campaigned on a promise of tearing up Tehran's nuclear deal with world powers, withdrew the U.S. from the accord last May. Since then, the United Nations says Iran has kept up its side of the bargain, though Iranian officials have increasingly threatened to resume higher enrichment.

Amid the new tensions, Iran's already-weakened economy has been further challenged. There have been sporadic protests in the country as well, incidents applauded by Trump amid Washington's maximalist approach to Tehran.

Khamenei, who earlier approved President Hassan Rouhani's outreach to the West during the nuclear deal negotiations, dismissed any future dealings with the U.S.

"About the United States, the resolution of any issues is not imaginable and negotiations with it will bring nothing but material and spiritual harm," Khamenei said in a statement.

The Warsaw summit, which started Wednesday, was initially pegged to focus entirely on Iran. However, the U.S. subsequently made it about the broader Middle East, to boost participation.

Iranian Foreign Minister Mohammad Javad Zarif predicted the Warsaw summit would not be productive for the U.S.

"I believe it's dead on arrival or dead before arrival," he said at a news conference before the bombing.