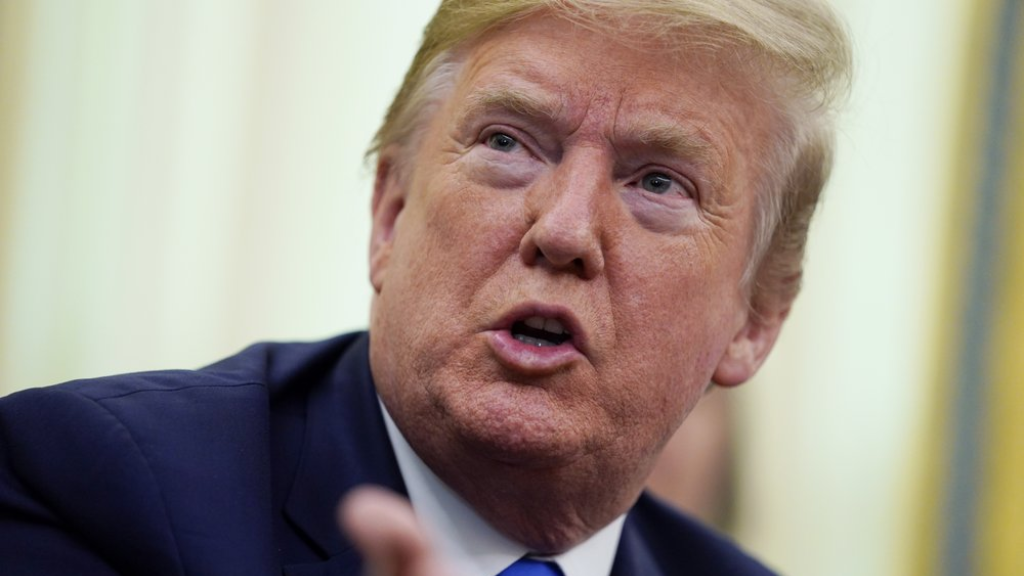 President Donald Trump speaks during an event to sign a proclamation in honor of World Nurses Day, in the Oval Office of the White House, Wednesday, May 6, 2020, in Washington. (AP Photo/Evan Vucci)

President Donald Trump reversed course on plans to wind down his COVID-19 task force, attempting to balance his enthusiasm for "reopening" the country with rising infection rates in parts of the nation.

The indecision on the fate of the expert panel was emblematic of an administration — and a country — struggling with competing priorities of averting more death and more economic suffering.

Trump appears focused on persuading Americans to accept the price of some lives lost as restrictions are eased, concerned about skyrocketing unemployment and intent on encouraging an economic rebound ahead of the November election.

While the daily number of new deaths in the New York area has declined markedly in recent weeks, deaths have essentially plateaued in the rest of the US.

One day after the administration suggested that its work would be done around Memorial Day, Trump said the White House task force of public health professionals and senior government officials would continue after all, indefinitely, with its focus shifting toward rebooting the economy and the development of a vaccine.

"I thought we could wind it down sooner," Trump said, adding, "I had no idea how popular the task force is."

A White House official, speaking on the condition of anonymity to discuss internal thinking, acknowledged that signalling on Tuesday that the task force was preparing to shut down had sent the wrong message and created a media maelstrom.

While the task force has already been meeting less frequently, its medical experts, particularly Drs Anthony Fauci and Deborah Birx, have emerged as among the most trusted voices on the virus response.

The Tuesday announcement of ending the task force sparked concerns that they would be sidelined as the outbreak continues amid fears of a fresh wave of illness in the fall.

Trump said Tuesday he would still seek their counsel, regardless of the fate of the task force.

"It is appreciated by the public," he said of the task force.

Trump said membership in the group would change as the nature of the crisis evolves.

In the Wednesday tweets Trump said "the Task Force will continue on indefinitely." He added that the White House "may add or subtract people to it, as appropriate. The Task Force will also be very focused on Vaccines & Therapeutics."

A day earlier, Trump made himself Exhibit A for reopening the country with a visit to an Arizona face mask factory, using the trip to demonstrate his determination to see an easing of stay-at-home orders even as the coronavirus remains a dire threat.

Trump did not wear a mask despite guidelines saying they should be worn inside the factory at all times.

As Trump pressed the nation to reopen, Dr Tom Frieden the former director of the Centers for Disease Control and Prevention testified Wednesday on Capitol Hill that the "war against COVID will be long and difficult."

"We're just at the beginning of this pandemic and must focus on the future," he testified, predicting there will be 100,000 deaths by the end of the month. As bad as the crisis has been, he said, "it's just the beginning."

Even as Trump was declaring that much of the task force's work on securing additional protective equipment was over, he was confronted with a different reality.

Sophia Thomas, president of the American Association of Nurse Practitioners, told Trump in an Oval Office meeting that she had been reusing the same N95 medical mask for weeks, and only brought a new one for her visit to the White House. Still, Trump dismissed reports of shortages as "fake news."

Later, during an event with Iowa Governor Kim Reynolds, Trump pointed to the US topping the world in COVID-19 testing, after months of supply shortages hampering the testing program. Des Moines has emerged as a new hotspot in recent days.

Reynolds told Trump that the virus "won't go away for a while," and that testing was essential to curtail its spread.

Trump has encouraged the nation to accept the human cost of returning to normalcy, saying repeatedly that Americans should view themselves as "warriors" combating the virus.

In an interview Wednesday, Democratic House Speaker Nancy Pelosi criticized Trump's approach. "Death is not an economic motivator, stimulus," she said. "So why are we going down that path?"

"Everyone's eager to get out," she added. "To unlock the lockdown is to test, trace, treat as well as isolate social distancing."

Trump on Wednesday defended his decision not to wear a face covering when he visited a Honeywell plant in Phoenix that makes them, saying he briefly donned one backstage, out of view of the press, for "not too long" a time.

Trump told reporters in the Oval Office as he signed a proclamation honouring nurses, that, "I actually did have one. I had a mask on for a period of time."

He added that he couldn't "help it" if reporters didn't see him and that the head of Honeywell had told him that he didn't need to wear one during the public portions of his visit.

The CDC has recommended that all Americans wear cloth masks when they can't socially distance. In the area where Trump spoke, a large video monitor listed safety guidelines, one of which said, "Please wear your mask at all times."

Pelosi suggested Wednesday that Trump's resistance to wearing a mask is "a vanity thing."

"Apparently the president has washed his hands of this," Pelosi said. "The task force is here today, gone tomorrow. No mask."

Trump tours, touts Mask Factory — but no mask for him