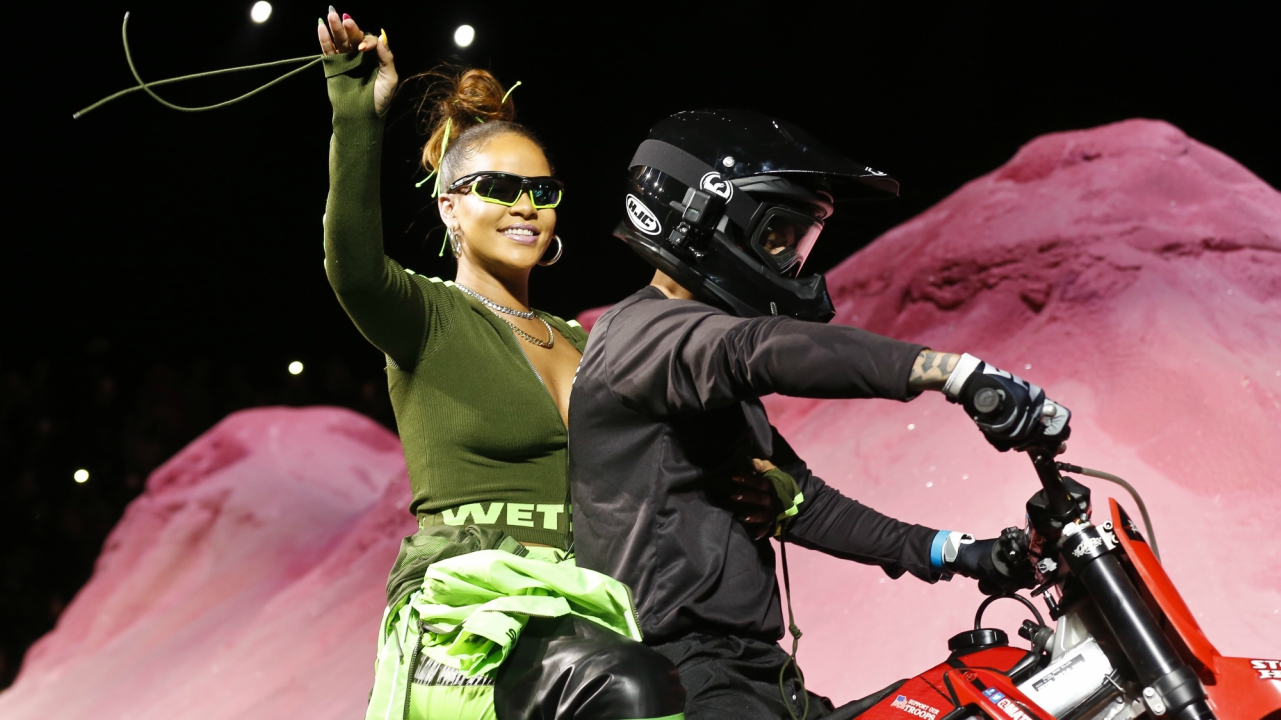 Rihanna didn't walk into New York Fashion Week. She rode through it.

The pop star and fashionista kicked off her Fenty Puma 2018 spring-summer collection Sunday with motocross bicycles flying high in the air, ascending above a dreamy display of powder pink mountains and sand — as the audience watched in awe.

Rihanna rode on the back of a bike — in true rock star form with one hand displaying the sign of the horns and her tongue sticking out — after the models strutted around the race car-like catwalk at the Park Avenue Armory.

She wore a fitted, long-sleeve army green shirt with a plunging neckline, a bright green jacket wrapped around her waist, thigh-high boots, and sunglasses. She was confident and cool, and her collection delivered a similar vibe.

The clothes were a mix of fitted and loose pieces, ranging from oversized jackets to tight dresses to shiny swimsuits.

Most of the items paired two colors: the navy blue pieces featured hot pink embellishments, while orange and black made up the various athletic suits.

While the clothes, worn mostly by women and some men, could be used at the gym for working out or even gym-selfies for Instagram, some were for the beach. There was a cropped top hoodie, low-waisted, knee-length shorts and fashion-forward one-piece bathing suits. One model even wore a towel over his head.

Rihanna's audience Sunday included members of the fashion world, but also some of her music peers, such as rappers Big Sean, Fabolous, Yo Gotti, Dave East and Cardi B., whose song "Bodak Yellow (Money Moves)" is currently No. 3 on the pop charts.

Diplo, the Grammy-winning producer who has worked with Beyonce, Justin Bieber and others, said he took a helicopter from a gig to make it to Rihanna's fashion show.

"I think music and fashion are so coincided together, and with (Rihanna), she is like equal parts a music beast and a fashion beast. And everybody has a little bit of it, they mix it up, but she's been doing it since she started," Diplo said of Rihanna, who released her first album in 2005. "Like, she's always been on both sides. So she's a veteran in that world. So it's amazing to be here for her show."

Last week, Rihanna — born Robyn Rihanna Fenty in Barbados — launched Fenty Beauty, which features makeup designed for all skin colors. The 29-year-old said she wanted to be sure all women, no matter their complexion, could use her products.

"She's a great businesswoman," R&B singer Jhene Aiko said of Rihanna at the show. "She's definitely a great role model for young girls, especially girls of colour, to look up to and see all that she's doing."

While Rihanna debuted 50 different looks at the show, the overall highlight? A black dress revealing some of the waist, paired with a baggy army green jacket to give it the Rihanna edge.

And if there's one thing Rihanna is, it is risk-taker: She didn't even wear a helmet when she rode on the bike.

Rihanna on Hurricane Irma: ‘It breaks my heart’