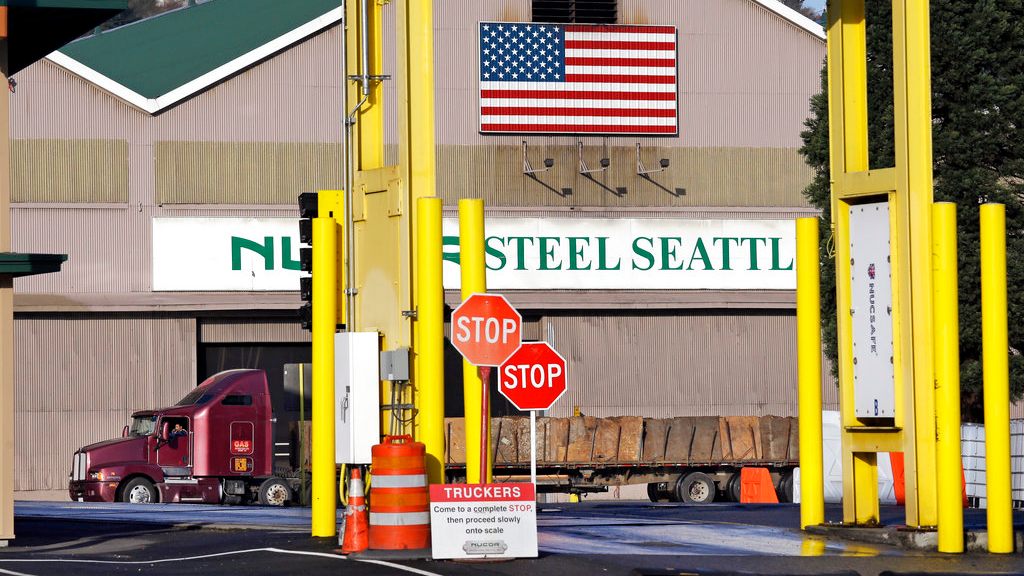 In this Feb. 25, 2016 file photo, a truck carries a load at the Nucor Steel plant in Seattle. U.S. companies pursuing exemptions from President Donald Trump’s tariff on imported steel are accusing American steel manufacturers of spreading inaccurate and misleading information, and they fear it may torpedo their requests. The president of one company calls objections raised by U.S. Steel and Nucor to his waiver request “literal untruths.”(AP Photo/Elaine Thompson, File)

U.S. companies seeking to be exempted from President Donald Trump's tariff on imported steel are accusing American steel manufacturers of spreading inaccurate and misleading information, and they fear it may torpedo their requests.

Robert Miller, president and CEO of NLMK USA, said objections raised by U.S. Steel and Nucor to his bid for a waiver are "literal untruths." He said his company, which imports huge slabs of steel from Russia, has already paid $80 million in duties and will be forced out of business if it isn't excused from the 25 percent tariff. U.S. Steel and Nucor are two of the country's largest steel producers.

"They ought to be ashamed of themselves," said Miller, who employs more than 1,100 people at mills in Pennsylvania and Indiana.

Miller's resentment, echoed by several other executives, is evidence of the backlash over how the Commerce Department is evaluating their requests to avoid the duty on steel imports. They fear the agency will be swayed by opposition from U.S. Steel, Nucor and other domestic steel suppliers that say they've been unfairly hurt by a glut of imports and back Trump's tariff.

U.S. Steel said its objections are based on detailed information about the dimensions and chemistry of the steel included in the requests. "We read what is publicly posted and respond," said spokeswoman Meghan Cox. Nucor did not reply to requests for comment.

The 20,000-plus waiver applications that the Commerce Department has received illustrate the chaos and uncertainty ignited by Trump's trade war against America's allies and adversaries. It's a battle that critics of his trade policy, including a number of Republican lawmakers, have warned is misguided and will end up harming U.S. businesses.

Trump and European leaders agreed this past Wednesday not to escalate their dispute over trade, but the tariff on steel and a separate duty on aluminum imports remains in place as the U.S. and Europe aim for a broader trade agreement. The metal taxes would continue to hit U.S. trading partners such as Canada, Mexico and Japan even if the U.S. and the EU forge a deal.

Miller bristled over insistence by Nucor and U.S. Steel that steel slab is readily available in the United States. "That's just not true," he said.

His company isn't the only one looking overseas for a product described as being consistently in short supply. California Steel Industries, a mill east of Los Angeles in Fontana, described the slab shortage as "acute" on the West Coast and declared that its waiver request is critical to its survival.

Aiming to rebuild the U.S. steel industry, Trump relied on a rarely used 1962 law that empowers him to impose tariffs on particular imports if the Commerce Department determines those goods threaten national security. He added a twist: Companies could be excused from the tariff if they could show, for example, that U.S. manufacturers don't make the metal they need in sufficient quantities.

But there are hurdles to clear on the path to securing an exemption. A single company may have to file dozens of separate requests to account for even slight variations in the metal it's buying. That means a mountain of paperwork to be filled out precisely. If not, the request is at risk of being rejected as incomplete. All this can be time consuming and expensive, especially for smaller businesses.

The requests are open to objections. The Commerce Department posts the exemption requests online to allow third parties to offer comments — even from competitors who have an interest in seeing a rival's request denied. But objections are frequently being submitted just as the comment period closes, undercutting the requester's ability to fire back.

Willie Chiang, executive vice president of Plains All American Pipeline, told the House Ways and Means subcommittee on trade last week that his company had no opportunity to respond to objections that contained "incorrect information" before the Commerce Department denied its exclusion request. Chiang didn't say who submitted the inaccurate information.

"The intent here is to restrict imports on a broad scale," said Richard Chriss, executive director of the American Institute for International Steel, a free trade group opposed to tariffs. "It wouldn't make sense from the administration's perspective to design a process that readily granted exclusions."

The Commerce Department declined to comment for this story.

Department officials have so far made public only a small number of their rulings.

An analysis of the numbers by the office of Rep. Jackie Walorski, an Indiana Republican and one of the most vocal opponents of the steel tariff on Capitol Hill, shows that 760 requests have been approved while 552 have been denied. The department hasn't yet approved a waiver request that triggered objections, according to Walorski's review.

The congresswoman's office also examined the more than 5,600 publicly available comments and found they were submitted on average about four days before the end of the 30-day comment period. More than 50 percent of the comments weren't delivered until 48 hours or less before the comment window closed. It took department an average of nine days to post comments online after receiving them, according to the analysis. The most prolific commenters were Nucor and U.S. Steel with 1,064 and 1,009, respectively.

A waiver request Seneca Foods Corporation submitted for tinplated steel it had already agreed to purchase from China was among the denials. U.S. Steel had objected, calling the tinplate a "standard product" that's readily available in the United States. In fact, U.S. Steel said it currently supplies the material to Seneca Foods, the nation's largest vegetable canner.

The New York-based Seneca Foods declined to comment. But in its waiver application, the company said domestically-made tinplate "is of inferior quality to imported material." Seneca Foods also said it's unclear, at best, if U.S. suppliers have the ability or willingness to expand their production in the long term to meet the company's annual demand for the material.

Philadelphia-based Crown Cork & Seal, a manufacturer of metal packaging for food and beverages, submitted a sharply worded attachment to its waiver application that anticipated pushback from domestic manufacturers. American steel mills, the document said, cannot meet aggregate demand for tinplate and have no plans to increase their capacity.

"We anticipate the U.S. mills will attempt to rebut this statement when they object to this exclusion request, but we encourage the Department of Commerce to see through their manipulative attempt to exploit the rules of the exclusion request process," the application said.

Daniel Shackell, Crown Cork & Seal's vice president for steel sourcing, said he's not optimistic about the company's chances of getting all 70 of its waiver requests approved. Eight have been granted so far primarily because the metal specified in those requests is not made in the United States. Twelve others have been denied, leaving 50 still to be decided.

"It's hard not to interpret that the Commerce Department wants domestic suppliers to have an edge," Shackell said.

Jay Zidell, president of Tube Forgings of America, a small company in Portland, Oregon, said he's filed 54 exclusion requests and U.S. Steel has objected to 38 of them. U.S. Steel declared it is "willing and ready to satisfy" Tube Forgings' demands for carbon steel tubing. But Zidell said the comments ignored past problems with metal quality and workmanship that led his company to sever a prior relationship with U.S. Steel.

Still, he's worried the Commerce Department won't approve all of the requests. Tube Forgings already has spent $600,000 on tariffs, he said, and may be on the hook for much more than that.

"The entire system is just screwed up," Zidell said.

Trump willing to shut down government over border security